Bangladesh vs Windies, 1st T20I, Match Prediction: Who will win the Match?

Bangladesh vs Windies, 1st T20I, Match Prediction: Who will win the Match?

Bangladesh have lost their only T20I at the venue against Sri Lanka.

Parking aside the shambolic show in the Test and ODI format, Windies have had a rough time in T20Is as well. They lost 2-1 against Bangladesh and then slumped to a 3-0 whitewash against India. As far as their ongoing tour of Bangladesh is concerned, they have felt the heat and, barring the victory in the second ODI at Sher-E-Bangla Stadium in Dhaka, they have well and truly been indifferent.

The opening T20I is scheduled to be played tomorrow at Sylhet International Cricket Stadium and Carlos Brathwaite’s men have a tough task ahead of them to turn their fortunes around. The Tigers, on the contrary, are oozing confidence and would be keen to thump their opponents even in the shortest format after their resounding show in the two-match Test and three-match T20I series.

The venue has been a witness to seven completed T20Is out of which six have been won by the team batting second. Hence, it won’t spring a surprise if the teams opt to field first after winning the toss. The track hasn’t seen many high scores, but bearing in mind both teams’ power-packed batting lineup, a high-scoring match can’t be ruled out. Spinners are expected to come into play.

The left-right combo of Tamim Iqbal and Liton Das are the openers with Soumya Sarkar to bat at number three. The middle-order will be shouldered by the experienced campaigners in Mushfiqur Rahim, Shakib Al Hasan, and Mahmudullah. Shakib will also partner Mehidy Hasan in the spin department. Ariful Haque is the all-rounder with Mohammad Saifuddin and Mustafizur Rahman being the fast bowlers.

Evin Lewis’ inclusion will boost the Caribbean team’s batting lineup. The left-hander will open with Shai Hope. Shimron Hetmyer and wicketkeeper Denesh Ramdin are slotted to bat at three and four respectively, followed by Powell, Pooran, captain Brathwaite and Allen. Thomas, Brathwaite, and Williams are the specialist fast bowlers with Khary Pierre and Fabian Allen being the spinners.

The prediction is for the team batting second to win the series opener. 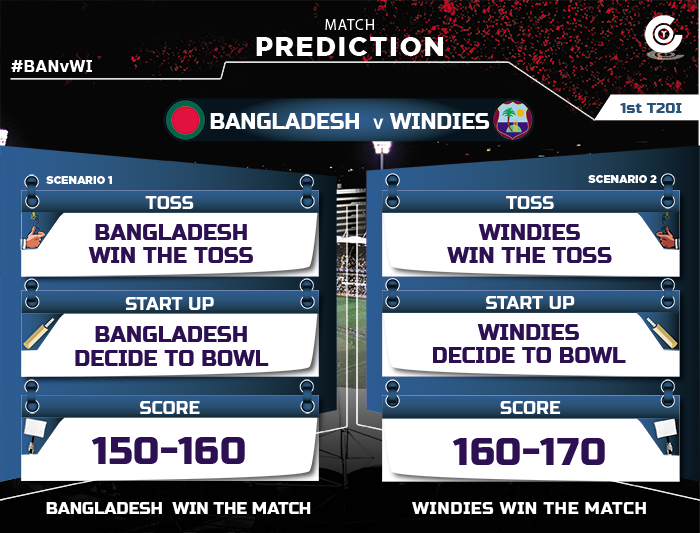