Bangladesh vs Windies, 3rd ODI, Match Prediction: Who will win the Match?

Bangladesh vs Windies, 3rd ODI, Match Prediction: Who will win the Match?

Sylhet is all set to make its ODI debut.

After a thumping victory by five wickets against Windies in the opening match at Sher-E-Bangla National Stadium, Bangladesh couldn’t replicate their form and huffed and puffed in the second encounter at the same venue. Shai Hope turned out to be a bone in their flesh as the batsman saw his through to victory in the closely-fought contest. Subsequently, The Tigers slumped to a four-wicket defeat.

On the other hand, the visiting team, devoid of their regular skipper Jason Holder, did reasonably decently to make a comeback and also win the first match on their tour. The deciding match is now scheduled to be played tomorrow at Sylhet International Cricket Stadium, a stadium which is all set to make its ODI debut after hosting its maiden Test against Zimbabwe earlier this year in November.

Bearing in mind the fact that it’s the all-important match, it won’t be a surprise if a slow and low track is dished out. In the last two matches, while the slow bowlers weaved magic, the batsmen also had their moments to rejoice. Also, in both instances, the team chasing has won. Moreover, with dew having its effect in late in the day, it won’t spring a surprise if the teams opt to field first after winning the toss.

The Tigers may draft in fast bowler Mohammad Saifuddin in place of Rubel Hossain, who hasn’t been at his best. Tamim Iqbal and Liton Das are the opening batsmen with Imrul Kayes and Mushfiqur Rahim to bat at three and four respectively. Bangladesh would also be looking up to Shakib and Mahmudullah. Mustafizur and Mashrafe are the fast bowling options with Mehidy and Shakib being the spinners.

The Caribbean team is unlikely to make any changes in the playing eleven. Hemraj and Hope will open the batting with Darren Bravo at number three. Marlon Samuels and Shimron Hetmyer will bat at four and five respectively. With Kemar Roach, coming at number nine, the batting has depth. He will also partner Paul and Thomas in the pace bowling department with Bishoo as the spin bowling option.

The prediction is for the team batting second to win the series decider. 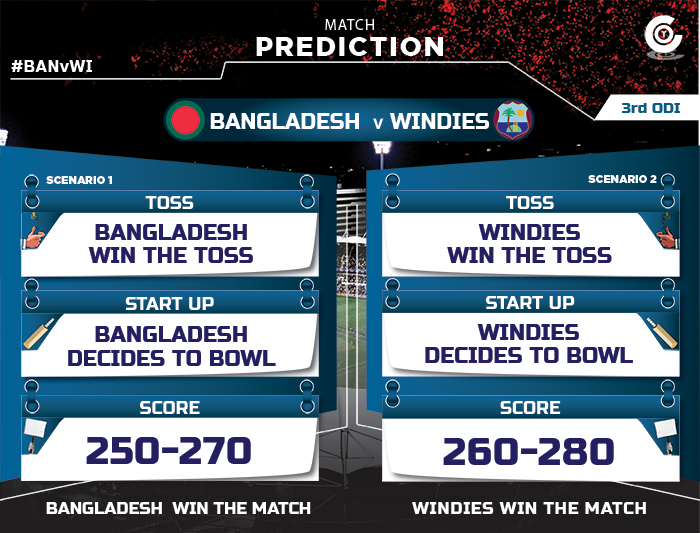