Bangladesh haven't lost an ODI at home against Zimbabwe since December 2010.

Bangladesh picked the bones out of Zimbabwe in the one-off Test in Dhaka. Now the high-on-confidence Tigers are set to lock horns with the same opposition in the first of the three ODIs at the Sylhet International Cricket Stadium, starting Sunday, March 1. Bangladesh haven’t played an ODI ever since their away campaign against Sri Lanka in July 2019 where they lost 3-0 under Tamim Iqbal.

The series will also mark the return of Mashrafe Mortaza, who’s likely to lead the Tigers in his last series. Bangladesh are on a 16-match winning streak against Zimbabwe at home. It was way back in December 2010 when the visitors got over the Tigers last time. The upcoming game is also the second ODI to be played in Sylhet after the one between Bangladesh and the West Indies in 2018.

The pitch in Sylhet has been a pretty sporting one over the last few games. In eight T20Is, the average score is around 165. Spinners are likely to get a lot of assistance as it was seen during the 2019-20 Bangabandhu BPL. But with dew around, chasing should be the way forward. The overhead conditions will be bright and sunny with the temperature in between 22 and 31 degrees Celsius.

The Tigers are likely to open with the tried and tested pair of Tamim Iqbal and Liton Das. There’s a chance of Najmul Hossain to play at three after he impressed of late, though in Tests and T20Is. Mushfiqur Rahim and Mahmudullah Riyad add the much-needed experience in the middle order.

Mahmudullah will have a point to prove after his snub from the Zimbabwe Test. Mohammad Saifuddin has returned from injury and that bolsters the Bangladesh bowling. The focus will also be on Mustafizur Rahman, who did well in the BPL, but has blown hot and cold for his national side.

Tinashe Kamunhukamwe made his ODI debut last year and he may be opening with skipper Chamu Chibhabha. Left-handed batter Craig Ervine should be in good stead after his blistering knocks in the one-off Test. A lot will depend on Brendan Taylor, who has played aggressive cricket in recent times.

Sean Williams and Sikandar Raza are more than handy with the bat. But the duo also needs to contribute with their spin bowling. Mutombodzi, Madhevere and Ndlovu are the other tweakers in the team. Donald Tiripano and Chris Mpofu should get the nod as the specialist fast bowling options. 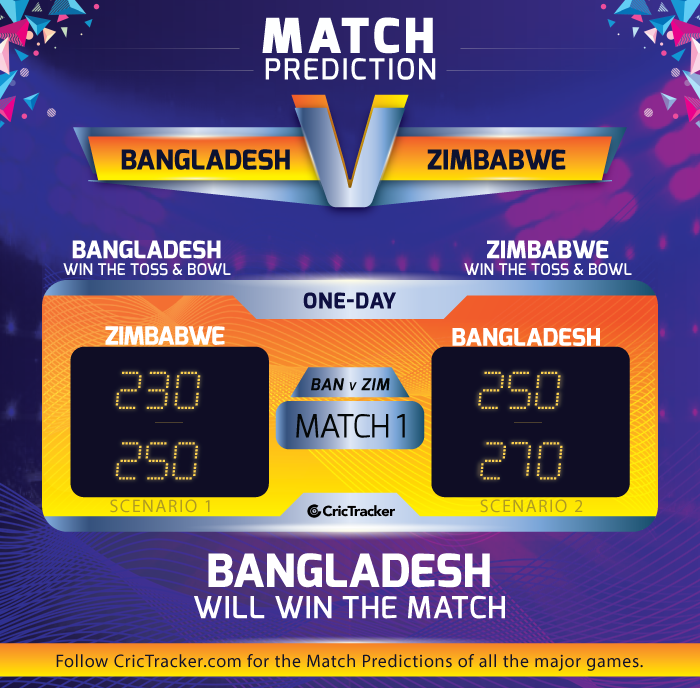