Mushfiqur Rahim seems to be the perfect captaincy option.

The first game of the three-match One-day International series between Bangladesh and Zimbabwe will be played at the Sylhet International Cricket Stadium in Sylhet.

The caravan of the Zimbabwe tour of Bangladesh moves on to its white-ball leg where the African nation will lock horns with Bangla Tigers in three ODIs and as many T20Is. The home side was imperious in the one-off Test but white-ball cricket will be a different kettle of fish altogether. Both sides will be bolstered by the addition of senior players.

The hosts will welcome their ODI skipper Mashrafe Mortaza back in the set-up while Zimbabwe will be bolstered by the addition of experienced campaigner in Sean Williams, who will lend potency to the middle-order alongside the duo of Sikandar Raza and Brendon Taylor.

Bangladesh have grappled with inconsistency in the past few months and they’ll be hoping that isn’t the case when they take on Zimbabwe after having done so well in the one-off Test.

Bright sunny spells are expected to be the order of the day in Sylhet on Sunday if the weather reports are to be believed. According to the report, the temperature is set to fluctuate between 17-30 degrees Celsius while the humidity is set to hover around 61%. Chances of rain- 10℅

Sylhet has normally provided for flat batting tracks which tend to get slow, aiding spin bowling as the game wears on. Dew might also come into play in the second half.

Average first innings score: 198 (In the lone ODI played at the venue)

Bangladesh: The hosts will hope that the likes of Tamim Iqbal and Mohammad Naim provide them with ideal starts as they have enough firepower in the form of Liton Das, Mushfiqur Rahim and Mahmudullah to cash-in.

Mohammad Saifuddin will spearhead the fast bowling department alongside Mustafizur Rahman and skipper Mortaza while they- as always- have enough spin options.

Zimbabwe: The African nation will bank on their quartet of the middle-order batsman in Craige Ervine, Sean Williams, Brendon Taylor and Sikandar Raza. As far as bowling is concerned, Chris Mpofu and Donald Tiripano will lead the fast bowling unit. 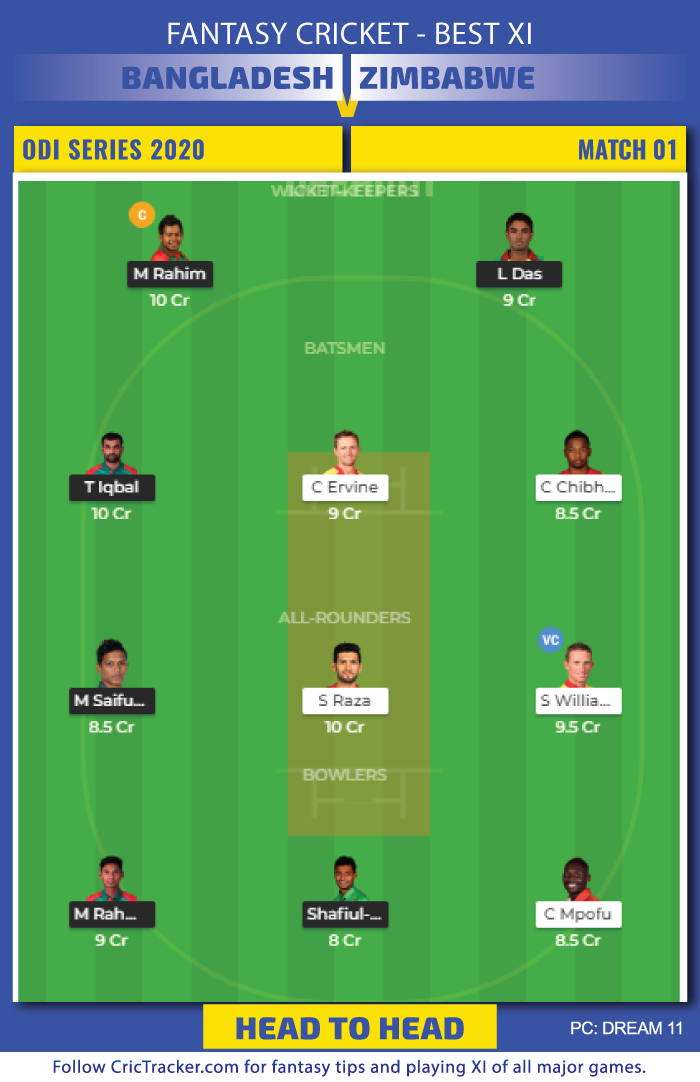 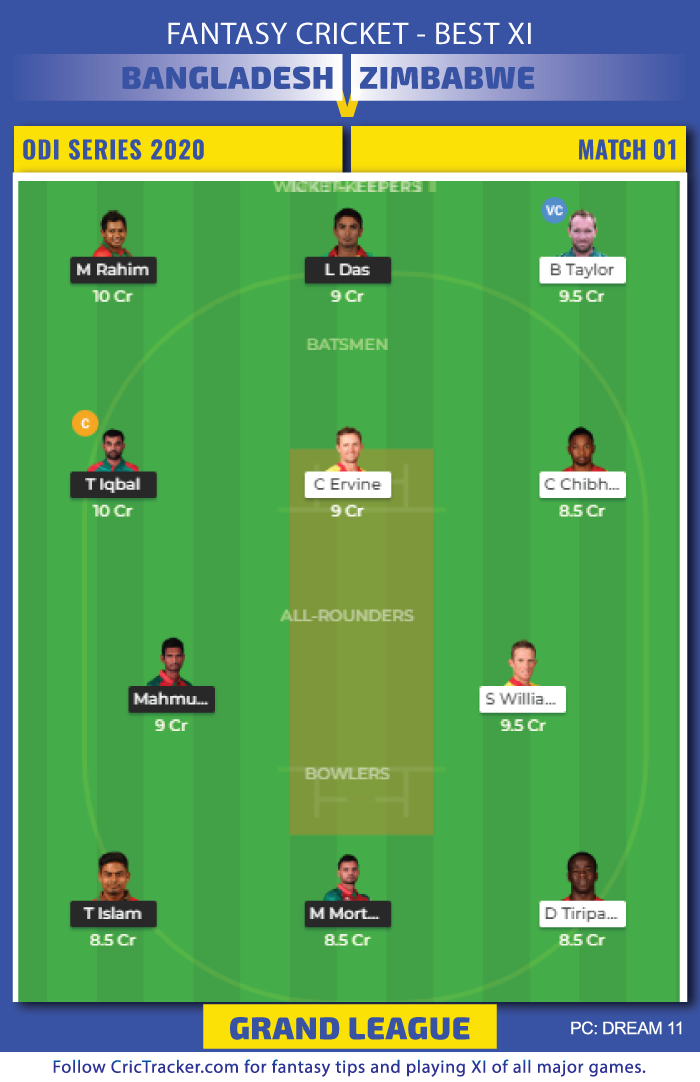 The cream of the Zimbabwean batting lies in the middle-order in the form of Brendon Taylor, Sikandar Raza, Craig Ervine, and Sean Williams. Hence, if you are looking to pick batsmen from Zimbabwe, pick them from the middle-order.

As far as Bangladesh is concerned, you can take a punt and select one of their spinners as captain/vice-captain, considering Zimbabwe traditionally struggles against spin.

Bangladesh is expected to come out as winners.