Bangladesh are on a four-match losing streak in the format.

It’s been a forgettable tour for Zimbabwe so far. They’ve played one Test match and three ODIs and haven’t tasted victory even in one game. Moreover, barring the second ODI which Bangladesh won by a mere four runs, the hosts have outplayed Zimbabwe in every game and the margin of defeat has been huge.

They now switch to the shortest format where Bangladesh haven’t had a great run. They have lost four games in a row now – two against India and two against Pakistan. On the other hand, Zimbabwe have been decent in the T20 format. The African nation has won four out of its last five games. Also, they topped the charts in the tri-series involving Singapore and Nepal.

However, with the momentum that Bangladesh have, they should go in as favourites for this two-match T20I series. But Zimbabwe will be looking to bounce back strongly after a disappointing time in the other two formats.

The 22-yard playing surface at the Sher-e-Bangla stadium in Dhaka is expected to be a good one to bat on. Historically, it has aided the batsmen and also, spinners as well. Dew might come in the second innings which may tempt the captains winning the toss to field first.

It’ll be interesting to see what opening combination Bangladesh go in with. Tamim Iqbal is a certainty and with Liton Das’ success in the ODIs, he makes a strong case. However, Mohammad Naim is another player who opened in Pakistan. Mushfiqur Rahim returns to the T20 squad to bolster the middle order while Mahmudullah, Afif Hossain and Soumya Sarkar will form the crux of the lower middle order.

Mohammad Saifuddin not only returns the lower order batting but also the death bowling. Mustafizur Rahman is likely to lead the bowling attack with Aminul Islam to be the lead spinner.

Regis Chakabva is going to be a key a player at the top of the order for Zimbabwe. Brendan Taylor, Craig Ervine, Sean Williams and Sikandar Raza form a strong middle order. The latter three can chip in with the ball as well lending much-needed balance to the side. Their form will be crucial to Zimbabwe’s chances in this T20I series. Donald Tiripano is going to be the lead pacer and the likes of Carl Mumba and Chris Mpofu assisting him in the pace attack. Tinotenda Mutombodzi is likely to be the main spinner. 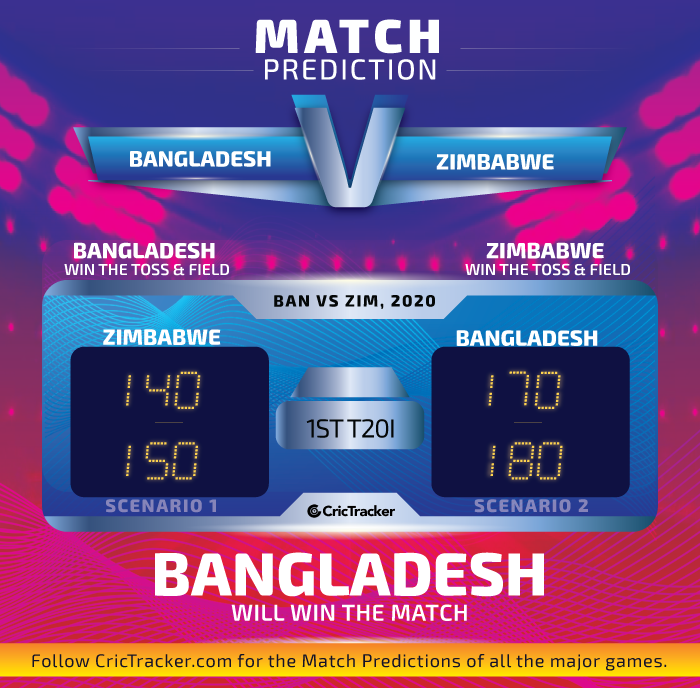