Sean Williams and Craig Ervine are most likely to feature in the Zimbabwe eleven.

Bangladesh got off to a thunderous start in the ODIs against Zimbabwe, winning by 169 runs in Sylhet. It was also the Tigers’ biggest victory in the format. Liton Das’ century inspired them to a mammoth score after which the bowlers rocked the opposition batting. Mashrafe Mortaza, the hosts’ skipper, also made a happy return to international cricket, picking 700 wickets across formats.

A victory in the next match would also help Mashrafe lead his side to a series victory. The second ODI on Tuesday, March 3 in Sylhet is a must-win affair for Zimbabwe and it goes without saying that the visitors need to play out of their skins to stage a comeback. Few of their major players, including Craig Ervine and Sean Williams, missed out last time and their absence was well and truly felt.

The pitch in Sylhet didn’t show up any demons in Sunday’s match. The deck was an absolute belter and the Zimbabwe bowlers had to work hard to reap the benefits. On Tuesday, the track isn’t expected to change much. Hence, another high-scoring game is expected. The conditions will be hazy with the temperature in between 22 and 28 degrees Celsius. The humidity won’t be high.

Liton Das retired hurt last time and didn’t take the field in the second half. Mushfiqur Rahim kept in his place. If the opener doesn’t get fit, then the doors might open on Mohammad Naim. Tamim Iqbal, Mahmudullah, Mushfiqur and Najmul Shanto got starts and they need to make them count.

Mithun is in good rhythm after his quick-fire half-century. The Tigers’ bowling performed as a unit. Mohammad Saifuddin picked three wickets on return from injury. Mashrafe was amongst the wickets. The spinners- Taijul Islam and Mehidy Hasan Miraz didn’t let anything loose either.

The visitors may resort to a few changes. Sean Williams has arrived after his family commitments and he’s likely to play on Tuesday. Craig Ervine was ill in the previous game and he might come in if he is fit. The axe may come down on opening batter Tinashe Kamunhukamwe and Regis Chakabva.

The young Wesley Madhevere is likely to retain his spot after his impressive all-round show. Donald Tiripano went at eight an over and it won’t be surprise if he gets benched. Brendan Taylor flattered to deceive, getting out to Taijul and will be looking to eke out a substantial knock in the next match. 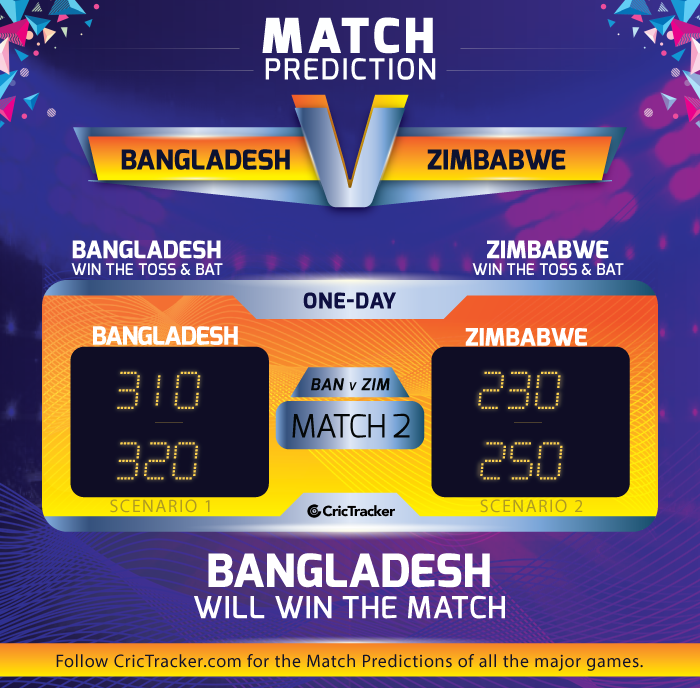