Will the defending champions get back to the winning ways in front of the home crowd?

The 14th match of the ongoing Big Bash League (BBL) between the Adelaide Strikers and Sydney Thunder provides an opportunity for both the teams to return to the winning ways. The defending champions have struggled so far in the absence of their skipper Travis Head and are currently at the sixth position in the points table with only a solitary win from three matches.

At the Adelaide Oval though they will be looking to find their mojo back with an impressive performance. The Strikers were skittled out for just 88 runs by the Perth Scorchers in the previous game and the batters should immediately put up an improved to trump the Thunder. For that to happen, their top-order which includes the likes of Alex Carey and Colin Ingram should fire.

The Thunder, on the other hand, were undone by the in-form Hurricanes in the last match. The team led by Shane Watson are having a good time so far in the tournament and it is important for them to continue in the same vein. With explosive batsmen at the top of the order and the calm head of Joe Root in their line-up, the Adelaide surface would just be the ideal one for them to climb the tally on the last day of 2018.

The 22 yards in Adelaide is generally known to support the spinners. This is the second game of this season and the previous encounter saw the score of 175 being easily chased. This being only the start of the summer, another high-scoring match will be in the offing it seems. The team winning the toss should look to bowl first on this surface.

The Strikers have received a big boost with Peter Siddle’s return to the line-up who has been released from Australia’s Test squad. Even the leg-spinner Liam O’Connor has been included in the squad and both might end up playing this game. Having said that, the batsmen have to put up a total on the board for the bowlers. Jake Weatherald and Carey need to provide the team with a good start with Colin Ingram, Matthew Short and Jonathan Wells to follow.

Rashid Khan might not play this game as his father has passed away and the cricketer might travel back home. Connor is the likeliest replacement for him.

The Thunder have retained the same 13-man squad that lost to the Hurricanes and are likely to field the unchanged XI. Shane Watson and Jos Buttler are doing a fantastic job at the top of the order while the class players in Callum Ferguson and Joe Root follow them. The youngsters in Daniel Sams and Jason Sangha have played a crucial role so far.

They might just ponder playing Gurinder Sandhu if he is fit in place of Jonathan Cook even as Chris Green and Sam Rainbird will retain their place.

The prediction is for the chasing team to come up trumps at the Adelaide Oval. 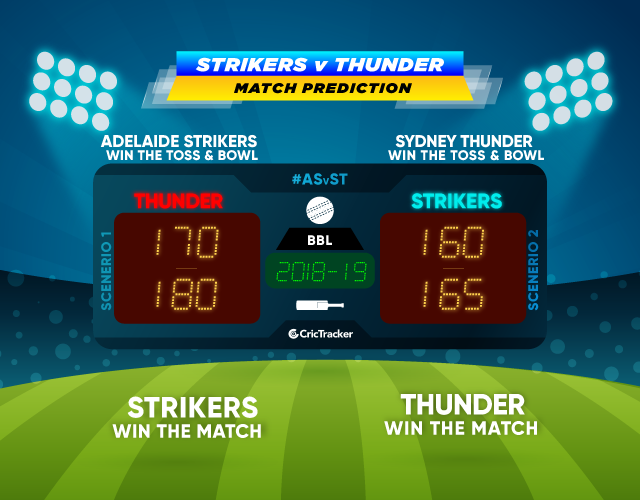