Sydney Thunder might come ahead of the Brisbane Heat given their adaptability to the conditions at the Showground Stadium.

Brisbane Heat finally managed to open their winning count in the season after defeating the Perth Scorchers on Saturday at the Perth Stadium. The Chris Lynn-led team defeated the Scorchers by five wickets after losing their first three matches. They will finally go into a game on the back of a victory when they face Sydney Thunder at the Showground Stadium. The Thunder have three wins and the same number of defeats from six matches and are at No.5 in the points table.

Marnus Labuschagne has been added to the Brisbane Heat squad for the first time this season. He returns from the Australian Test squad after the completion of the Sydney Test match on Monday. He replaces Alex Ross in the squad who didn’t feature in any game thus far. This game will be last for the Thunder with both Jos Buttler and Joe Root in their side as they will be replaced by Anton Devcich and Chris Jordan from the next fixture.

The 24th match of the Big Bash League (BBL) 2018-19 will be played between Sydney Thunder and Brisbane Heat at the Sydney Showground Stadium.

The average first innings score at the Showground Stadium during the last BBL season was 168 but a drastic change has been seen in scores this season at this venue similar to that of the remaining grounds. As the game will be played after the WBBL game between Sydney Thunder and Melbourne Renegades, once again the BBL game to be followed could witness another game with low scores.

The Sydney Thunder’s leg-spinner Jono Cook has turned out to be a worthy inclusion to the side. The 29-year-old picked up only three wickets this season but has conceded runs at an economy of only 7.05. He is expected to play a key role on Tuesday on a slow track in Sydney. 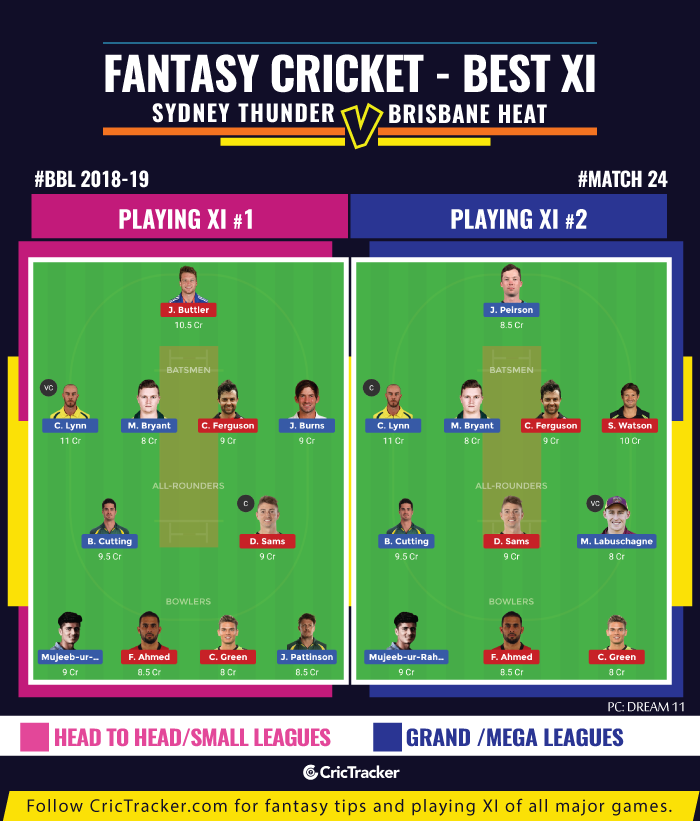 Marnus Labuschagne might be included in the playing XI as he provides an extra bowling option. Given not many will pick the all-rounder, considering him as a multiplier and him performing could earn decent profits.

Sydney Thunder might come ahead of the Brisbane Heat given their adaptability to the conditions at the Showground Stadium.