The Sydney Thunder are capable of stopping the Melbourne Renegades’ winning streak and move to the top of the table.

Sydney Thunder has confirmed their final four finish after a narrow five-run win on Sunday over the Melbourne Stars at the Bankstown Oval. They will now be up against the Melbourne Renegades in their penultimate game of the league phase. The Thunder are place at No.2 in the points table with 17 points from 12 games with 8 wins, only behind Sydney Sixers’ 18 points. The game against the Renegades might not be an easy one given how they have fared in the recent games.

The Melbourne Renegades, who are trying to make it through to the finals, have won each of their last four matches and moved up to 4th place with 13 points from 11 games. Their fight will be with the Perth Scorchers who are currently 5th in the table having won six of their 12 matches. Renegades are a point ahead and with an extra game in hand than Scorchers. At least two wins from the remaining three games will fix their position in final four irrespective of the other results.

The 47th match of the Women’s Big Bash League (WBBL) will be played between Sydney Thunder and Melbourne Renegades at the Sydney Showground Stadium in Sydney.

The game will be live on Sony SIX and Sony SIX HD in India. Live streaming is available on Sony LIV.

The Sydney Showground Stadium has produced decent totals in the WBBL in the past but pitches for both the games this season have been on the slower side. The previous game between the Thunder and Sixers witnessed the ball shooting down at knee height. The pitch for the Thunder-Renegades game will surely be a better one and can’t be any worse than that of the previous match.

Among the high-priced all-rounders, Maitlan Brown looks like gold dust as she costs only 8 credits and has consistent returns. In the previous seven games, her performance points read – 34, 23, 2, 21, 20, 2 and 26. Brown chips in with wickets and occasionally with the bat when required.

Sophie Molineux has been in some great form in the recent matches with both bat and ball and should start as the captain. The International stars of Sydney Thunder Racheal Haynes and Stafanie Taylor are worthy for multipliers. Molly Strano and Amy Satterthwaite also can be considered as vice-captain. 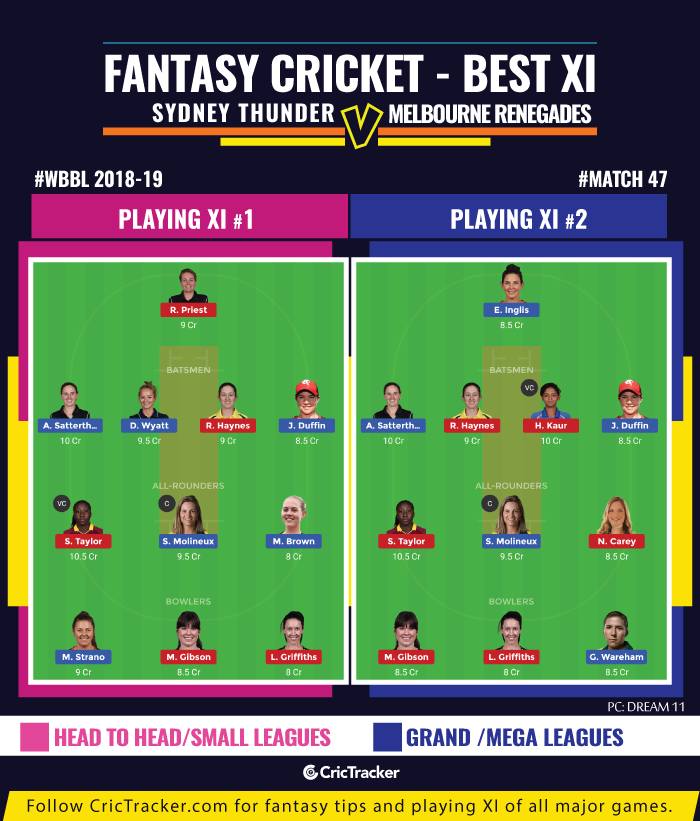 Only one of Harmanpreet Kaur or Danielle Wyatt can fit into the playing XI due to their higher price-tags. With Kaur not in form, she can be excluded given Wyatt’s fifty in the previous match. Among batters, Satterthwaite and Haynes are in form and make it to the XI ahead of Harmanpreet.

The Sydney Thunder are capable of stopping the Melbourne Renegades’ winning streak and move to the top of the table.