Brisbane Heat will start as the favourites at their home ground against the Melbourne Renegades.

Brisbane Heat has gone from nothing to two as they bounced back with consecutive wins after losing each of their first three matches. They will be up against Melbourne Renegades on Thursday who got a much-needed win over the unbeaten Hobart Hurricanes. Renegades won their first two games of the season before losing three in a row. Both the teams were forced to make a change to their line-up due to the Australian commitments.

Australian Test batsman Marcus Harris has been named in the Melbourne Renegades squad in place of Aaron Finch who will be leading the Australian ODI team in the 3-match home series against India starting on Saturday. Tom Cooper will once again take the captaincy responsibilities of the Renegades in the absence of Finch. Brisbane Heat made a change to their squad with Alex Ross coming back in place of Matt Renshaw who has been selected for the Test series against Sri Lanka.

The 26th match of the Big Bash League (BBL) 2018-19 will be played between Brisbane Heat and Melbourne Renegades at the Gabba in Brisbane.

The Gabba in Brisbane is easily the best scoring venue every year but it might not be the case given how the pitches have fared this season. This venue hosted the opening game of the season which saw 140+ scores. Expect a much better track this time which would suit the home team’s batting.

In current form and playing at Gabba makes Lynn an ideal option as captain or at least as a vice-captain. Sam Harper has been the best batsman for the Renegades this season and can be picked as one of the multipliers. The all-rounders in both the sides – Daniel Christian, Mohammad Nabi and Ben Cutting can be considered for multipliers. 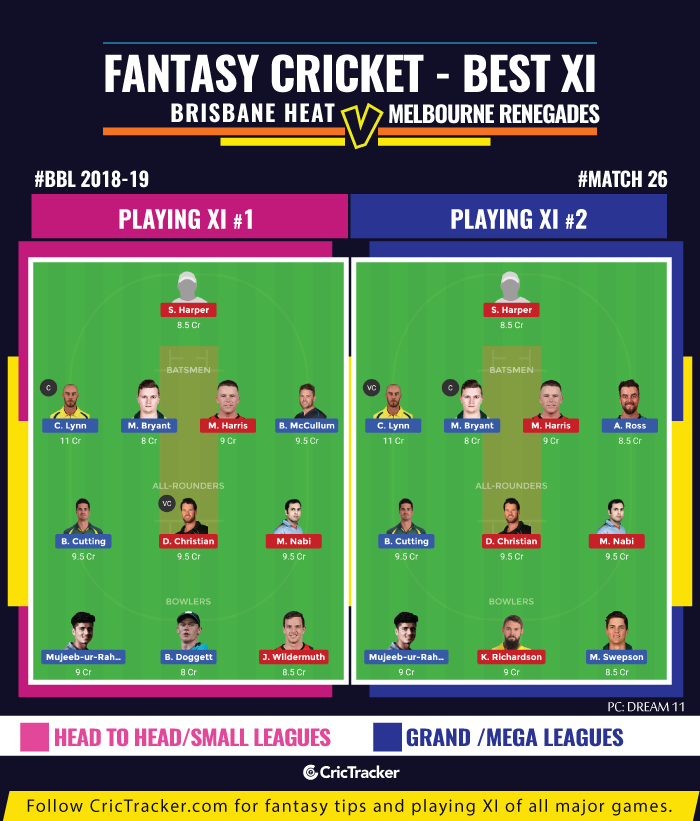 The Renegades dropped Cameron White for Aaron Finch in the previous game. Now with Marcus Harris coming in, there are chances that he comes in Finch’s place. Mackenzie Harvey might also make way for White. There is a possibility that White plays in place of Finch and Harris is on the bench.

Brisbane Heat will start as favourites at their home ground against the Melbourne Renegades.