Travis Head, who last played the final of BBL07, will be back leading the Adelaide Strikers.

The Adelaide Strikers will take on the in-form Melbourne Stars in the 27th game of the Big Bash League (BBL). Both these sides lost their respective previous games and have a lot of thinking to do going ahead. The Strikers will miss the services of Billy Stanlake, Alex Carey and Peter Siddle due to Australian ODI duties.

The Stars continue to miss out on Glenn Maxwell, Marcus Stoinis, Peter Handscomb and Adam Zampa due to the national duties. Their absence was clearly felt in the team’s last match. The Melbourne Stars, though have an upper hand in the duel between both these team as they’ve won four games while the Strikers won only three.

The Adelaide track is a good surface to bat on. However, it is not for those players who wish to go after the bowlers right from the start. It is important for at least one batsman to hold one end up tight and get a good score even though they don’t come at a fair clip. It is predicted to be quite hot out there in the middle and there shouldn’t be any interruptions to the game.

The Adelaide Strikers have got about four changes to make to their XI from the previous game. It is learned that Jonathan Wells is being considered an option to open the innings. He averages 67 in this season and will replace Alex Carey. Travis Head, who hasn’t played in the BBL since the final last year will be back leading the side.

Also, Harry Nielsen will come in as the wicket-keeper and is likely to replace Matthew Short who only played one good inning this entire season. Wes Agar and Ben Laughlin will replace the outgoing Peter Siddle and Billy Stanlake.

The Melbourne Stars already played one game without their premier players. The team failed to get past the winning line under the captaincy of Nic Maddinson. Yet, they are likely to field the same XI and will put a lot of hopes on Nic Maddinson, Ben Dunk and DJ Bravo in their batting department. The bowling attack appears to be slightly weak without Stoinis and Zampa.

The prediction is that the Adelaide Strikers will win the match as their side still looks strong even without the big players. 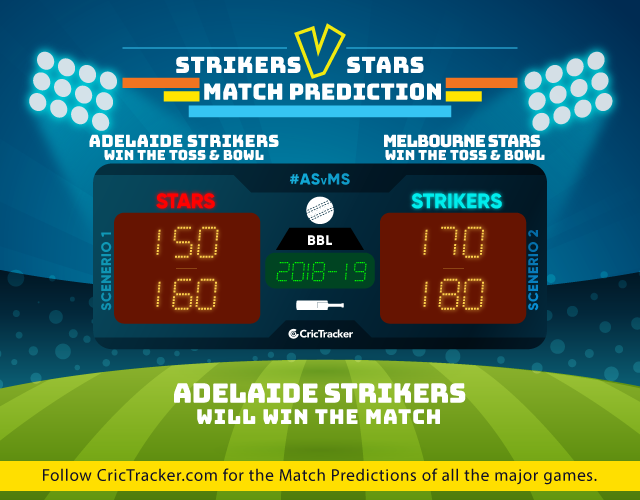