Sydney Thunder should manage to get the better of Adelaide Strikers due to home advantage if rain doesn’t hamper their plans again.

Sydney Thunder looking to gain back some momentum losing four of their last five matches which puts them at No.6 in the points table. They will face Adelaide Strikers who have four wins from seven matches in their 8th match including three from their last four matches. The Thunder have a couple of changes to make ahead of this game as both Jos Buttler and Joe Root left the team to join England’s Test squad facing Windies in the Caribbean.

The 28th match of the Big Bash League (BBL) 2018-19 will be played between Sydney Thunder and Adelaide Strikers at the Sydney Showground Stadium.

The scores produced at the Showground Stadium has witnessed a drastic change this season compared to the last season where the average first innings total was 168. The ball kept low in some of the matches but the most recent game between Thunder and Heat turned out to be a high-scoring one. It was due to rain prior and during the game that quickened up the track. As the game progressed, the pitch was back to its nature of being on the slower side.

Jono Cook can be named the find of the season for Sydney Thunder. The leg-spinner is a good fit for the slow track at the Showground Stadium. The 29-year-old picked up only six wickets from six games this season including three in the last match. Cook has conceded runs at an economy of 7.00.

Daniel Sams suffered a couple of failures this season but has been the most effective player for the Thunder. Travis Head will be hoping to return to the Australia Test squad with a big knock. Anton Devcich could be a handy bowling option opening the innings on a slow Sydney surface. 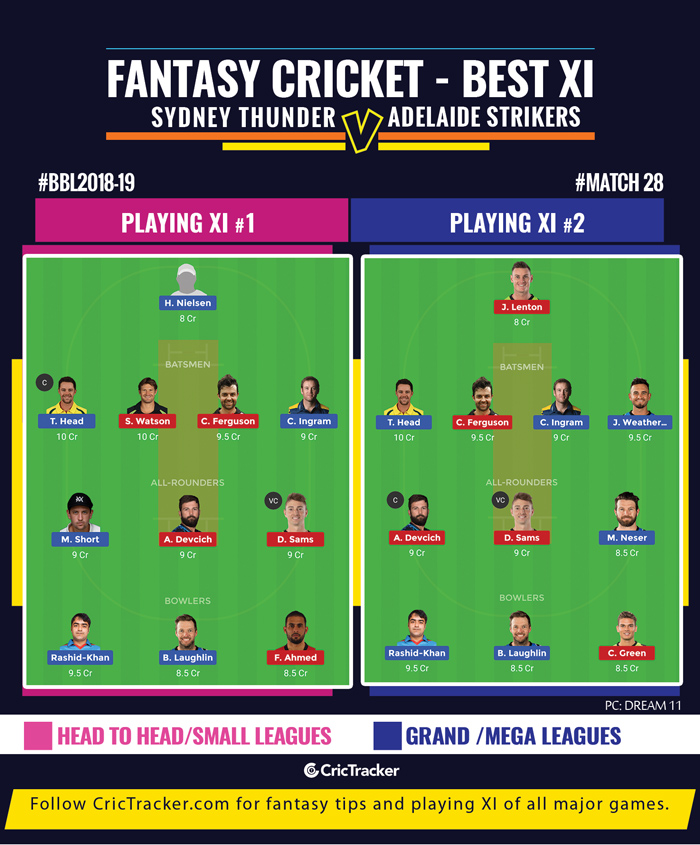 The new inclusions Jay Lenton and Anton Devcich are expected to make it to the playing XI. However, Chris Jordan might not have a spot given the fact that they already have a settled bowling. Liam O’Connor can also be picked from the bowlers’ category considering his consistency.

Sydney Thunder should manage to get the better of Adelaide Strikers due to home advantage if rain doesn’t hamper their plans again.