After about a week off, the Hobart Hurricanes will be back into action on Monday. The side has had a dream start to the tournament winning the first five games. However, the Melbourne Renegades came in their way and stopped them from making it a double hat-trick. Yet, with 10 points, it is still the Hurricanes who top the points table even though all the other teams have played at least seven games on an average.

The Hurricanes, in an attempt to bounce back after their first defeat, will face the Melbourne Stars at the big ‘G. The Stars have suffered two straight losses against the Scorchers and the Strikers. They’ll also be keen on redeeming themselves with a good show in front of their home crowd.

The wicket at the Melbourne Cricket Ground (MCG) isn’t typically a high-scoring one. The batsmen will have to labour hard to put runs on the board. Strike rotation will be the key rather than attempting the big shots. The bowlers who have some pace variations to work with will find a great deal of success on this track where the ball holds up a bit.

It is preferable chasing on this ground as it is tough to determine a good total batting first. Also, the pitch quickens up as the game progresses making the chase slightly easier. Moreover, the dew factor will come into play and the toss will have a huge say on deciding the winner of the game. The weather is expected to remain quite pleasant.

The Melbourne Stars have only made one change to their 13-man squad. Tom O’Connell replaced Michael Beer but might not make it into the eleven as yet. The same set of players who played against the Adelaide Strikers are expected to continue. DJ Bravo with the ball will be extremely important. Lance Morris is the other player who might sit out.

The Hobart Hurricanes announced an unchanged thirteen for the upcoming game. It is highly likely that they might not change their eleven either. Jake Doran and David Moody will be the two players warming the bench. This match will be the 50th BBL game for George Bailey. He will be the first Hurricanes player to reach the landmark. D’Arcy Short and Matthew Wade will have to provide the side with a good start.

The team that bats second is likely to win the game and the Hobart Hurricanes appear to be the better of the two sides. 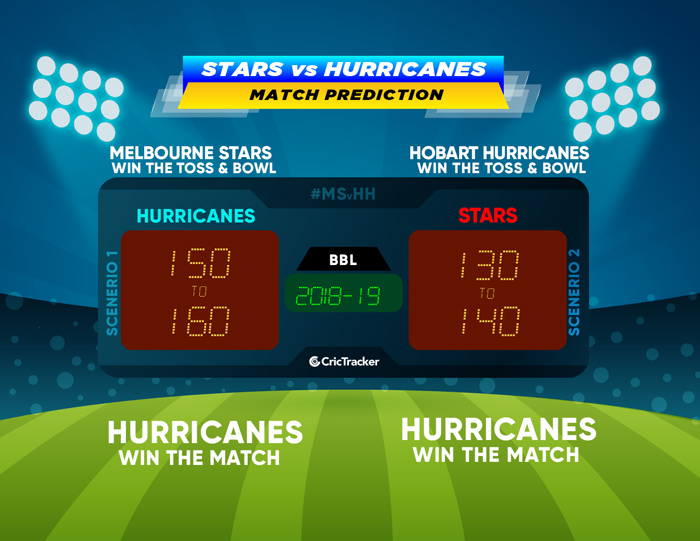