Brisbane Heat are expected to bag their 4th win of the season and move ahead of Sydney Thunder on the points table.

A huge 101-run win against Melbourne Renegades in Geelong helped the Brisbane Heat register their 3rd win from seven matches this season. It also boosted their NRR which will help them move up in the points table when they face Sydney Thunder on Thursday. The Thunder are currently placed at No.3 having won four out of the eight matches they played thus far. They are coming here on the back of a huge 71-run win against the defending champions Adelaide Strikers.

Sam Heazlett and Mark Steketee return to the Brisbane squad as three of their players found a place with the Cricket Australia XI tour match against Sri Lanka. The duo comes into the squad in place of Marnus Labuschagne and Matt Renshaw, who along with Joe Burns, will be in action in Hobart. Sydney Thunder’s Jason Sangha has also been named in the CA XI. He will be replaced by Ryan Gibson who has been selected for the first time this season. Nathan McAndrew also replaced Sam Rainbird in the Thunder squad.

The 33rd match of the Big Bash League (BBL) 2018-19 will be played between Brisbane Heat and Sydney Thunder at the Gabba in Brisbane.

Gabba has usually been a high scoring venue in the BBL. However, it has been no different from the pitches at the other venues this season. In the two matches in 2018-19, the home team scored 146 and 144 respectively and lost while defending.

There are only a few who will back Mitchell Swepson after his performance in this season of the BBL. The Brisbane Heat leg-spinner managed to pick only five wickets from the five innings he bowled including three in the last match. He went wicketless in two games but bowled well to deserve at least two wickets.

Chris Lynn’s recent form prompts us to pick him as the captain and Brendon McCullum as vice-captain. Anton Devcich could turn things around for the Thunder with his all-round skills so does Daniel Sams. The likes of Chris Green and Max Bryant can be considered as vice-captain. 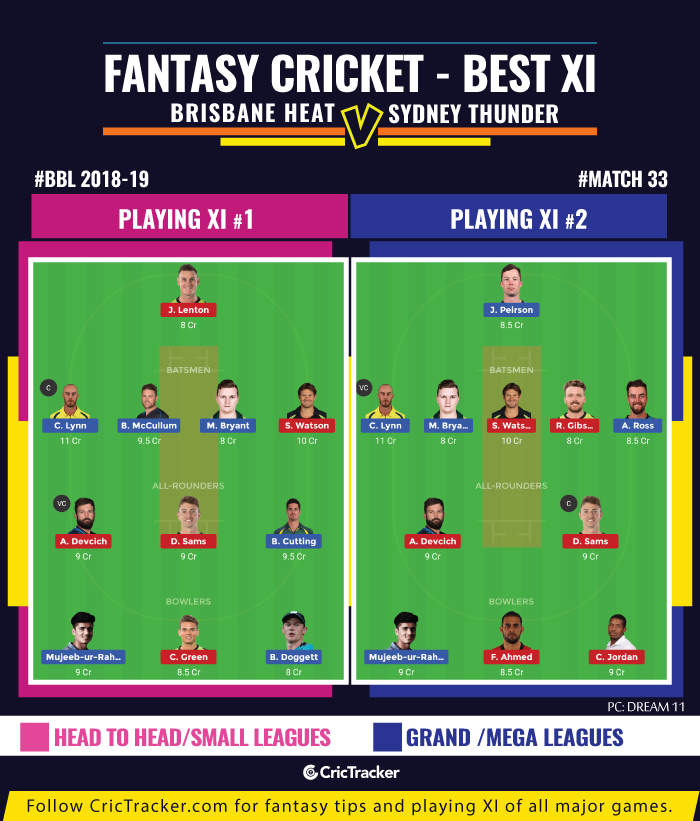 The bowlers’ category is filled with the likes of Mujeeb, Fawad, Green, Jordan, Doggett, Swepson and Lalor who are capable of bagging wickets in bulk. Mujeeb will be the first pick from this list due to his consistency while Green has to be picked given his batting skills. Fawad is the best among the remaining five.

Brisbane Heat are expected to bag their 4th win of the season and move ahead of Sydney Thunder on the points table.