The Sixers emerged triumphant against the Heat in their previous meeting at the Carrara Oval.

Both Sydney Sixers and Brisbane Heat are languishing at the bottom half of the points table in this edition’s BBL. Even as the Sixers are on the sixth spot with four wins from nine matches, Chris Lynn’s Heat are below them with three wins from eight contests. However, the latter can take heart from the fact that they have the second highest Net Run Rate (NRR) +0.590 after Hobart Hurricanes +0.740.

These teams are now set to lock horns in tomorrow’s match at the Sydney Cricket Ground (SCG) and another loss for either team can put its campaign in shambles. The Sixers lost their last match against Melbourne Renegades at the very venue and they would be keen to get a win under their belt. The Heat had a controversial game last time around against Sydney Thunder when the lights went off.

The 36th match of the Big Bash League (BBL) 2018-19 will be played between Sydney Sixers and Brisbane Heat at the Sydney Cricket Ground in Sydney.

The track at the SCG has gotten slower as the tournament has progressed. Only three matches have been played here in this BBL out of which two were won by the team batting second. Hence, teams might just opt to field first after winning the toss. Spinners are most likely to come into play. The Sixers have lost their last two games at this venue after the win against Perth Scorchers almost a month ago.

James Vince has had a horrible time in the recent past with scores of 18, 1, 28 and 6. Being an effective player in the T20 format, a big knock is due from the Englishman. The Sixers also need their overseas recruit to deliver going into the crunch parts of the tournament.

For grand leagues, Chris Lynn can be made the vice-captain, but in the smaller leagues, the Queenslander can be slotted in as the captain. James Vince and all-rounder Moises Henriques are decent options for the multipliers. 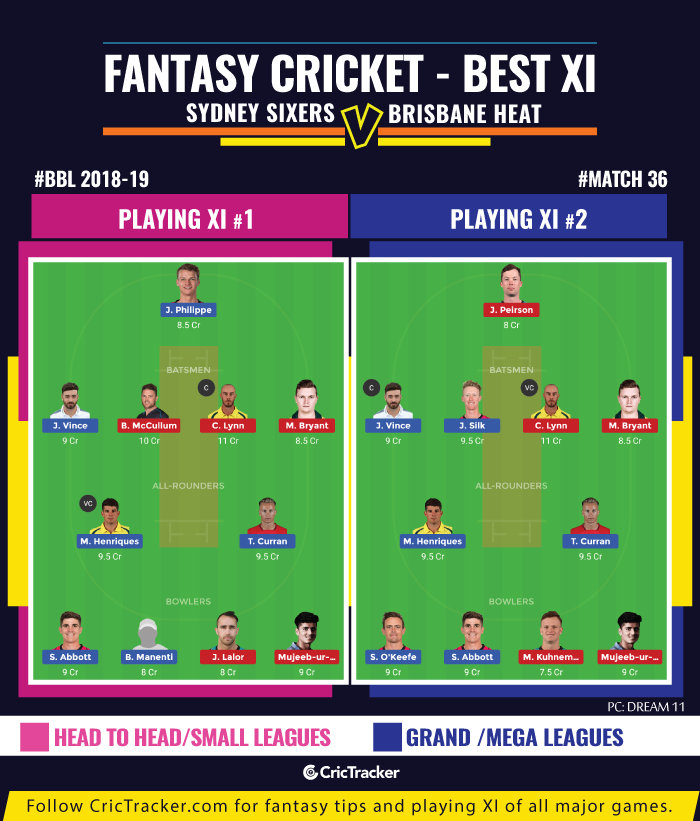 Choosing one of Josh Phillippe, who mostly bats at number five and six, and Jimmy Pierson in the wicketkeeper’s category is a tough call. As the latter’s position in the batting order depends on the situation of the match.

The team batting second is likely to come out trumps.