The Scorchers are desperately in need of a victory.

After the nail-biting match on the onset of the New Year, the Perth Scorchers and the Sydney Thunder will meet again for the 41st game of the tournament. It was a 1-run victory for the Thunder when these two sides met each other earlier this season. Moreover, it was a similar situation when these team faced off each other on the instance before that. On that occasion too, the Thunder emerged victorious with just 3 runs differentiating both the teams.

After the 71-run win against the Adelaide Strikers in the 28th match, the Thunder haven’t found themselves on the better side of the result. So far in the season, they lost five out of ten games and desperately need a win to break into the top four. The situation of the Scorchers isn’t much different either. They are at the bottom of the table currently with just three wins in nine games and will hope to turn things around.

The Optus Stadium in Perth is a place where the batsmen will enjoy batting. High scores have been witnessed in the last few games. The average scores are high and there should be some pace and bounce for the bowlers. The temperatures aren’t really high for this match and the forecast is quite good. Dew will come into play.

The Marsh brothers are back into the squad for the upcoming game. Shaun has been in tremendous form of late and will have a massive role in determining the team’s fortunes. Mitchell will take over the captaincy responsibility from Ashton Turner who can play with a lot more freedom. Also, Jason Behrendorff joining in will strengthen the bowling department.

Nathan McAndrew, Matt Gilkes, Baxter Holt are the three players added to the Thunder squad for the game against Perth. It will be one among Matt Gilkes and Baxter Holt who will take the field while Nathan McAndrew is expected to warm the bench. The rest of the side looks similar to what it was in the previous game.

The prediction is that the team batting second will win the match. Scorchers go into this game as the favourites. 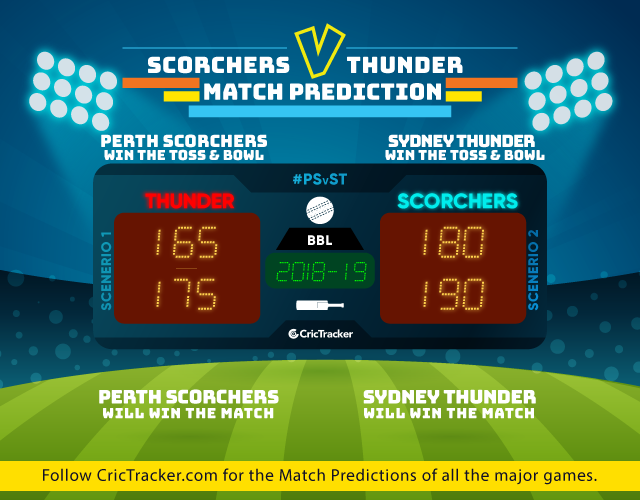