Who among Shaun Marsh and Aaron Finch has to be picked as captain?

Perth Scorchers have been far from their standards in this Big Bash League winning only three of the ten matches they played thus far. One of the main reasons for their poor performances in this season has been their inconsistency with the ball. The Scorchers are known for their pace-attack which has failed to make an impact except for one or two matches. Andrew Tye, who has been the best bowler over the last couple of seasons, failed in more of the games.

They need to win all their remaining four matches to have a chance of making it to the semi-final. They will take on Melbourne Renegades in their 11th match. The Renegades are in quite a better position compared to the Scorchers having won six of their 11 matches. Renegades, led by Aaron Finch, have won four of their six matches after a hat-trick of defeats.

The 43rd match of the Big Bash League (BBL) 2018-19 will be played between Perth Scorchers and Melbourne Renegades at the Perth Stadium.

Live streaming for this match is available on Sony Liv.

The Perth track has been producing big totals recently with the batsmen enjoying the pace and bounce from the pitch. The chasing teams have won in all matches this season including the last two from a situation from where it was difficult for them to eke out a victory.

Sam Whiteman has a moderate grade quad injury that will require a rehabilitation period of 2-3 weeks while David Willey returned to the UK this week to manage a left shoulder injury.

In the Big Bash League, Shaun Marsh has scored 1433 runs with the help of 14 fifties at an average of 53.07 in the 35 matches. His batting average is the best in the BBL and he is the only player with 50+ average among the players with 1000 runs. His efficiency with the bat was under display in the previous game where he struck a brilliant 96* against Sydney Thunder.

Shaun Marsh and Aaron Finch have to be captain and vice-captain given their brilliant record in the Big Bash. One among Cameron Bancroft, Mitchell Marsh, Ashton Turner, Mohammad Nabi and Daniel Christian can be picked up as either the captain or the vice-captain. 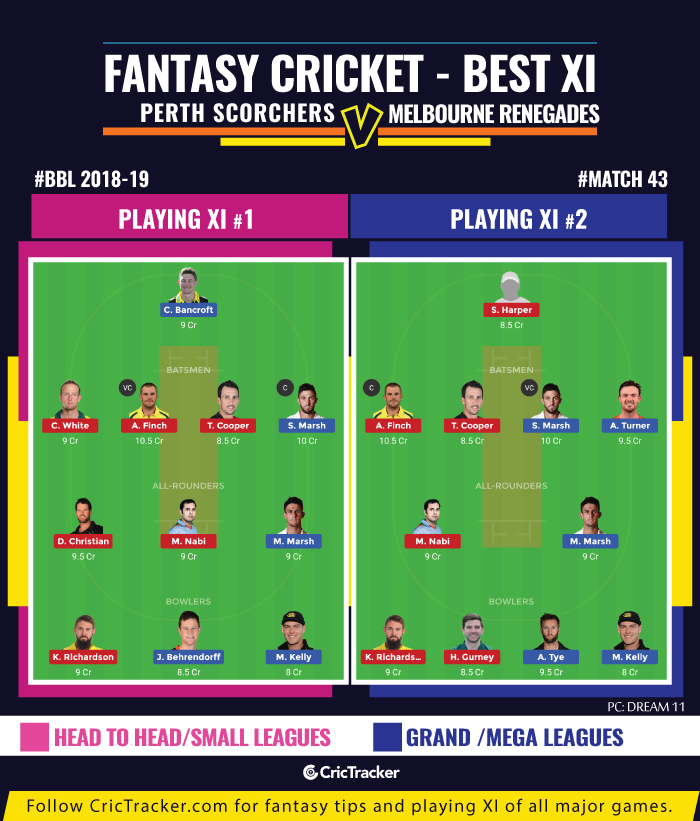 At best, only two of Nathan Coulter-Nile, Andrew Tye and Kane Richardson can be picked that too by considering Matthew Kelly who costs only 8 credits. The likes of Finch and Marsh are 10.5 and 10 respectively. Some other key batsmen and all-rounders too cost 9+ credits.

Perth Scorchers are expected to win this do-or-die game against Melbourne Renegades.