The Docklands Stadium in Melbourne is a low-scoring venue - what should you team combination be considering that?

The Melbourne Renegades will play their penultimate game in the league stages of the Big Bash League (BBL) 2018-19 against the Sydney Thunder. The semi-final spot for both these teams is in jeopardy as the competition for the top four spots is quite intense. While the Hobart Hurricanes have sealed one of the knockout berths, five teams are competing hard for the remaining three places.

The Renegades are placed at the third position on the points table with seven wins in twelve games. They’ve got two issues to focus upon. Firstly, the net-run-rate should improve as it could play a decisive factor when things get close. Secondly, the team needs to win at least one game out of the remaining two. The Sydney Thunder is fifth on the points table with five wins in eleven games. The team needs to win at least two games out of their last three.

The 46th match of the Big Bash League (BBL) 2018-19 will be played between Melbourne Renegades and Sydney Thunder at the Docklands Stadium in Melbourne.

The Docklands Stadium in Melbourne is a low-scoring venue. The ball stays low here and it is not easy hitting the big shots. The batsmen will need to be cautious and picky with their shot selection. Anything around 150 batting first should be defendable. However, chasing here is a preferable option.

Matthew Gilkes got injured while training before the match. He will be replaced by Baxter Holt in the playing XI. Cameron White has a minor hamstring injury.

Gurinder Sandhu has performed really well in the last five matches. He picked up 7 wickets at an average of 13.57. Moreover, his economy of 6.78 is also quite impressive. Hence, he can be your power pick for the upcoming match.

Aaron Finch, Callum Ferguson, and Daniel Christian should be the front-runners for the captaincy position in your team. All these three are impact players and are capable of turning the game on its head. For vice-captain, you can pick one between Anton Devcich, Daniel Sams, and Kane Richardson. 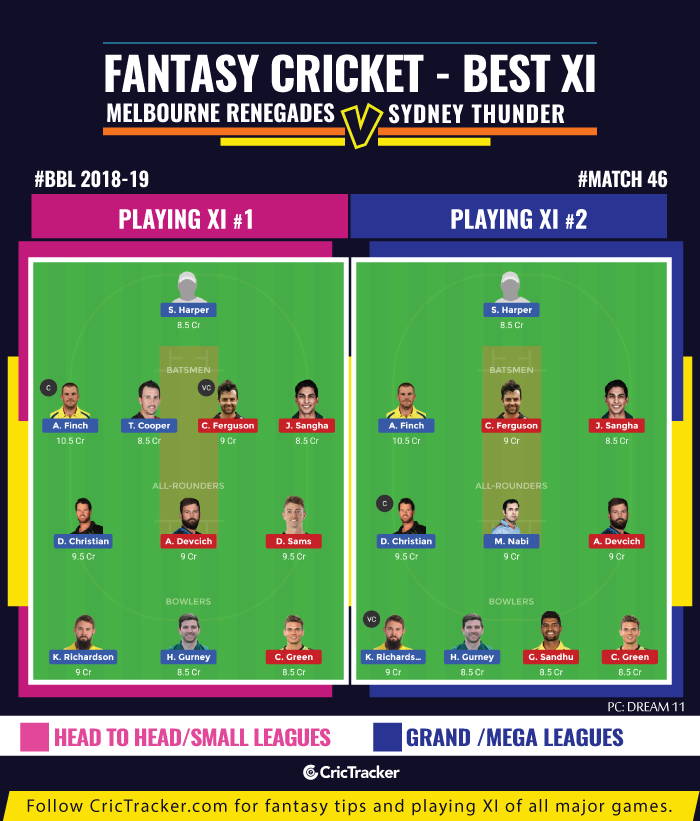 There are plenty of all-rounder options for this game., it includes Daniel Christian, Anton Devcich, Daniel Sams and Mohammad Nabi. If you are to pick among these players, Christian, Sams and Devcich are your best three. If you’d only pick two all-rounders in your side, it should be Christian and Devcich considering the behaviour of the pitch.

The Melbourne Renegades are predicted to win this match.