The last time these two teams met, the Strikers registered a five-wicket win at the Gabba.

The Adelaide Strikers and the Brisbane Heat, who are virtually knocked out of the tournament, will face each other in the 50th game of Big Bash League (BBL 2018-19). The chances of them making into the playoffs are very little. However, these sides will look to win both their remaining two games and thus give themselves an outside chance.

The last time these two teams met, the Strikers registered a five-wicket win at the Gabba. However, the hosts have got the second worst net-run-rate in the tournament. Though, they lead the head to head battle against the Heat 5-3. They will draw confidence from this stat and will look forward to making the most of the home conditions. The Brisbane Heat, on the other hand, enter into this game on the back of a great win against the Perth Scorchers.

The 50th match of the Big Bash League (BBL) 2018-19 will be played between Adelaide Strikers and Brisbane Heat at the Adelaide Oval.

150+ scores were recorded in all five matches that were played in this season. The average first innings score is over 160 and chasing teams have won three of these games. The toss, though, is not expected to play a huge factor.

Out – Brendan Doggett, Mujeeb ur Rahman

Peter Siddle is released from the Australian Test squad. Mujeeb Ur Rahman will return home to Afghanistan and is not available for the remaining two matches in the league stages.

Josh Lalor took 14 wickets from nine matches this season. Moreover, he picked up a hat-trick in the last match and seems to be in excellent form. He should be a part of your fantasy eleven and is the power pick for the upcoming game. 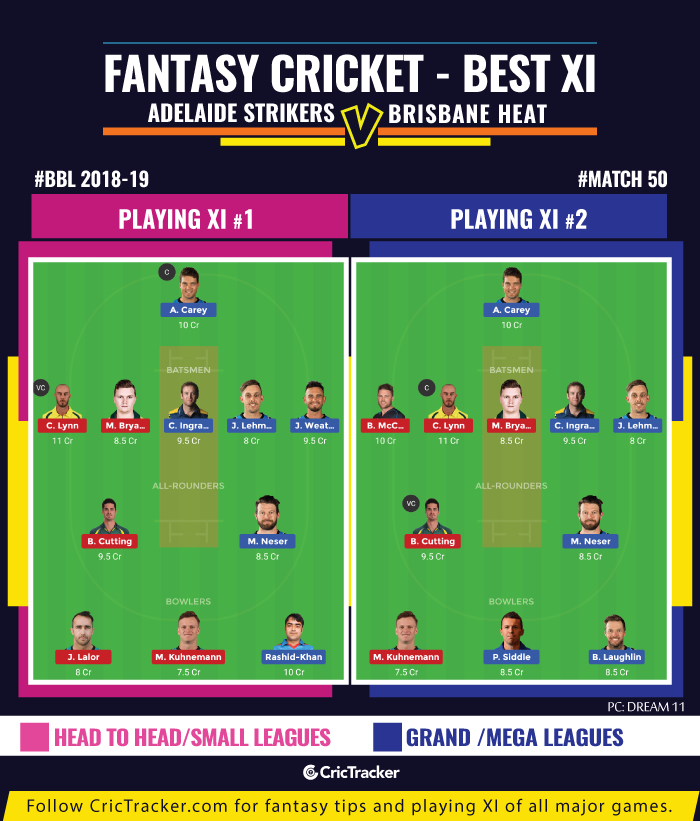 The Adelaide Strikers are predicted to win the match.