Stars are in a must-win situation.

The Stars’ campaign has taken a hiatus after losses in both the previous two games. Had they won at least one of these games, they might not have placed themselves in this do-or-die situation. The Sixers, on the hand, registered four consecutive wins and they’ll hope to make it five ahead of the semis.

The 56th match of the Big Bash League (BBL) 2018-19 will be played between Melbourne Stars and Sydney Sixers at the Melbourne Cricket Stadium.

The track at MCG is a slow surface. The ball doesn’t come on to the bat well and patience is the key for a batsman. It is highly preferable to chase as the batsmen will have a target in mind and then they can mould their approach accordingly.

Nathan Lyon added to the Sydney Sixers squad for the first time this season. Sandeep Lamichhane returned to BBL after the completion of Nepal’s tour of UAE.

Ben Dunk scored 275 runs from 13 innings in 2018/19 BBL including two fifties. He is the second highest run-getter for Stars after Marcus Stoinis.

Marcus Stoinis is must as captain or vice-captain 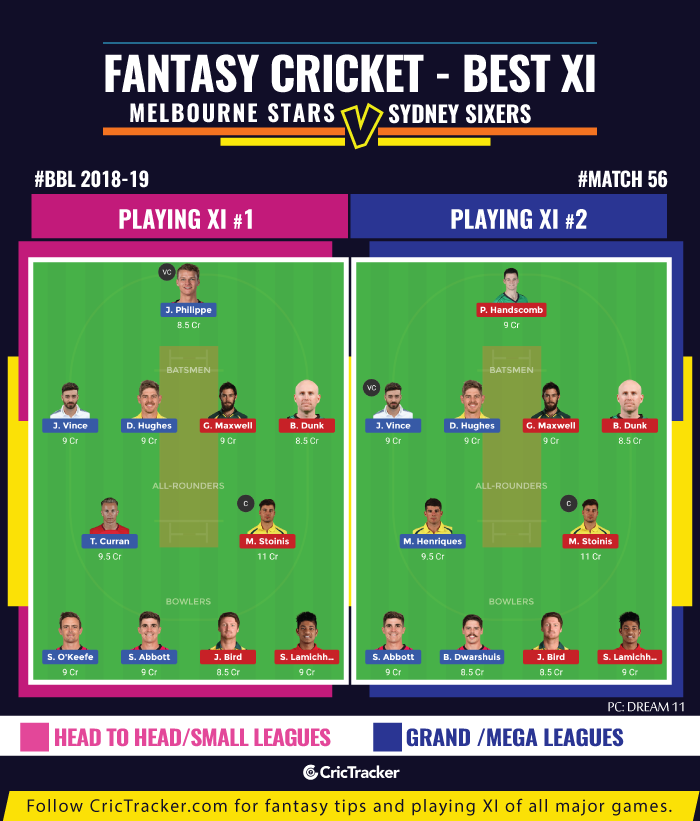 One of Josh Phillipe and Peter Handscomb has to be picked from keepers’ category. Consider the following statistics before making a decision:

Phillipe – 123 runs from last five innings as an opener.

Handscomb – 53 runs from last five innings. Not opening the innings.

The Sydney Sixers are expected to win the match.