Interestingly, James Faulkner will be taking on his former side Melbourne Stars after representing them in the first seven seasons.

While the Stars are off to a shaky start to their campaign, a narrow win against Brisbane kept Hobart Hurricanes on track to stay relevant among the top half. Their opponents Melbourne Stars lost their opener to Sydney Stars in a rain-marred game and they are keen to open their account as well.

Interestingly, James Faulkner will be taking on his former side Melbourne Stars after representing them in the first seven seasons. With a good bunch of experienced players in George Bailey, Johan Botha and Matthew Wade, Hurricanes look strong on paper to pick up two points.

The Stars will have to work hard if they wish to register first points as they travel all the way to Hobart, a stadium which hasn’t been a happy hunting ground for visiting sides. Their stalwarts Dwayne Bravo and Glenn Maxwell will hold a major responsibility to get them over the line.

A hot afternoon awaits players from both sides in Hobart and with a dry pitch on cards, both sides will launch their best spin attacks. Nevertheless, a boundary-fest is expected with the short boundaries and the ground too has a history of high-scoring games.

Matthew Wade and D’Arcy Short will kick-start the innings for the Hurricanes. Short will be keen to ride on his fifty from the previous game and he will have great experienced support in the middle order from Johan Botha, George Bailey, Alex Doolan and James Faulkner. Faulkner and Archer once again will hold the key with the ball for the Hurricanes with two spinning options in Johan Botha and Clive Rose.

Ben Dunk and Travis Dean need to provide a good foundation for their side to take any command in the game. Glenn Maxwell, Marcus Stoinis and Nick Larkin will be crucial in the middle order alongside a good finisher in Dwayne Bravo. The Windies all-rounder as always will be their go-to bowler with three spinning options in Adam Zampa, Sandeep Lamichhane and skipper Maxwell. Jackson Coleman and Jackson Bird will be the other bowling options for the Stars.

The prediction is for the Hurricanes to register their second win 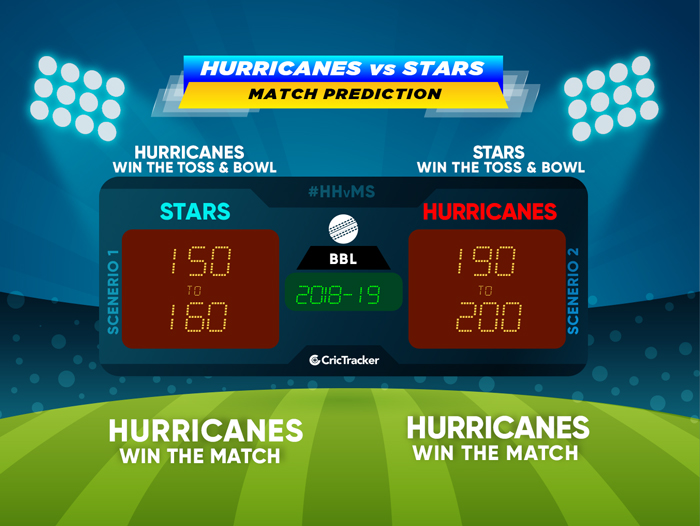