The Final of the 2019-20 Big Bash League will be played between Sydney Sixers and Melbourne Stars at the Sydney Cricket Ground in Sydney.

So, this is it! After seven weeks of heart-pumping, nerve-wracking, sumptuous and at times anti-climatic display, we are finally down to the summit clash of the 2019-20 edition of the Big Bash League where Sydney Sixers will lock horns with Melbourne Stars at the SCG. Both sides have had a plethora of heartbreaks in the past when it comes to the BBL final. Last year runners-up Melbourne Stars will be looking to finally get their hands on the title after having narrowly missed out in 2015-16 and 2018-19.

Sydney Sixers, on the other hand, will be looking to emulate their feat of the inaugural season where they defeated Perth Scorchers by 7 wickets to claim the title. Since then, the Sixers have competed in two finals which they ended up losing to the Scorchers in 2014-15 and 2016-17. Both sides have locked horns thrice this season. While Melbourne Stars won the opening round by 44 runs before Sixers turned the tables in the next encounters- by 21 and 43 runs respectively.

Unfortunately, it is expected to be a day of thunderstorms in Sydney on Saturday. While the temperature is set to be between 21 and 25 degrees Celsius and the humidity set to hovering around 85%, constant passages of rain is set to be the order of the day. Chances of rain- 100℅.

The track at Sydney has usually dished out pristine batting conditions for the batsmen with the spinners coming into play in the second half. But with rain set to be the order of the day on Sunday, the moisture in the pitch could well bring the fast bowlers into contention.

Average first innings score:– 155 [In the last 3 completed games at the venue]

Sydney Sixers have named an unchanged squad for the summit clash.

Melbourne Stars have made one change to their squad for the summit clash. Jonathan Merlo comes into the squad, replacing Dilbar Hussain.

Melbourne Stars: Marcus Stoinis [695 runs at 57.9] and Nick Larkin [259 runs at 32.37] were the spearheads in Stars amassing a match-winning total in the last game. The duo along with skipper Glenn Maxwell [393 runs at 43.6] will be the key to their fortunes. Haris Rauf [20 wickets at 11.55] claimed a three-wicket haul in the last game while Nathan Coulter-Nile chipped in with two. The duo along with Adam Zampa [18 wickets] will lead the bowling unit. 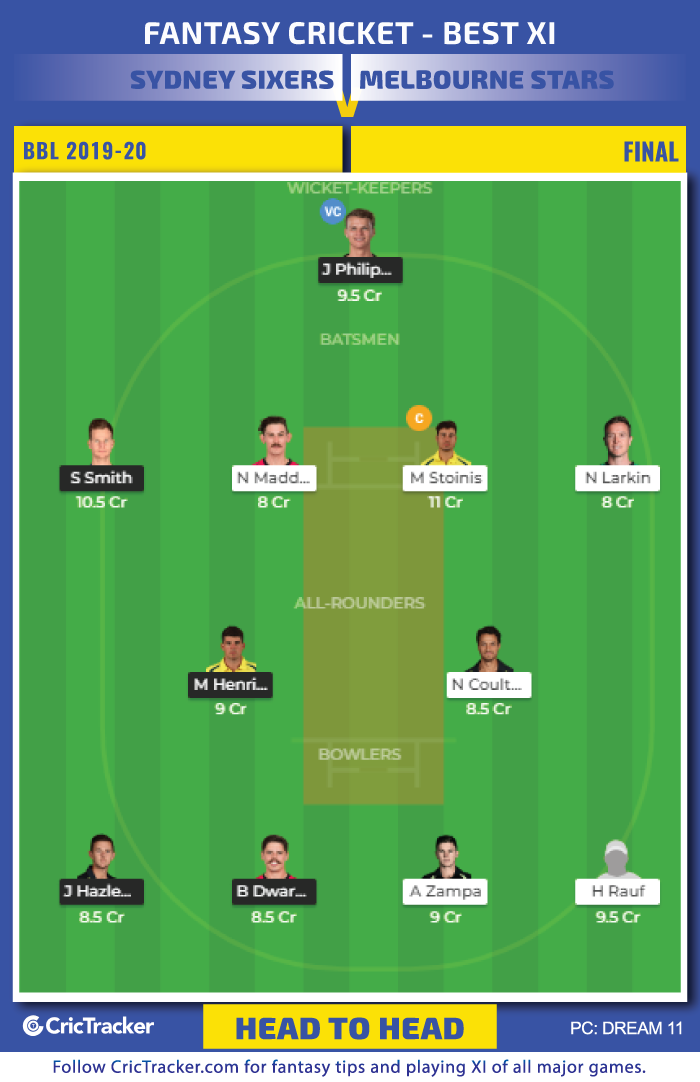 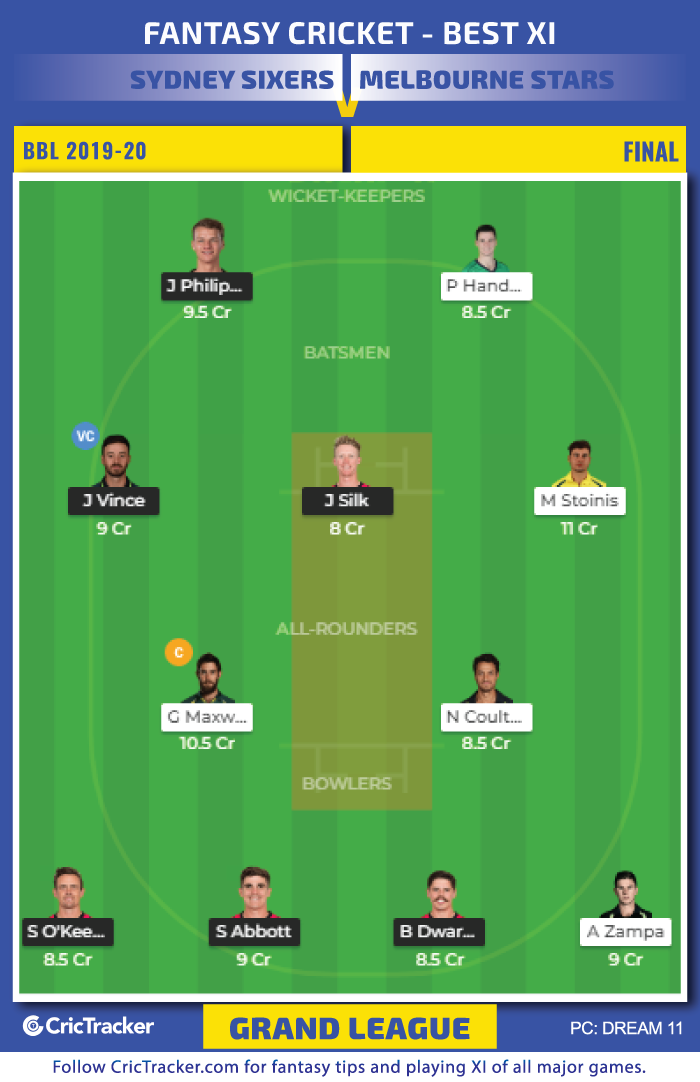 Both sides have got brilliant top-order batsmen in Marcus Stoinis, Josh Phillippe, James Vince. Glenn Maxwell can contribute with both bat and ball. Hence picking them as captain/vice-captain could be worth a punt.

Also, with rain set to be the order of the day, fast bowlers might come into the picture and hence opting for the likes of Haris Rauf, Josh Hazlewood or Sean Abbott can also reap you great rewards.

Melbourne Stars are expected to come out as the winners.