Swepson isn't the part of the squad for this game. He has been picked in the 63% of teams. Do not pick him in your Dream11 Fantasy team.

Perth Scorchers won the toss and elected to bat first.

The 18th match of the Big Bash League (BBL) 2019-20 will be played between Brisbane Heat and Perth Scorchers at the Carrara Oval in Queensland.

Brisbane Heat and Perth Scorchers will lock horns in the first game of the year 2020 on Wednesday. The Heat are coming into this contest after an 8-day long break and would want to continue their winning momentum. Interestingly, both the sides won and lost respectively by a similar margin (48 runs) in their previous encounters. While the Heat got the better of the Sydney Sixers defending 209, the Scorchers went down to the Sixers chasing 175.

As far as the points table is concerned, the Chris Lynn-led side has played only three matches so far winning only one and are scheduled to play four matches in next nine days. Their performances during this period will determine their fortunes in the tournament it seems and they would want to start with a win against the Scorchers. The Perth side has already lost three games out of four and it is time for them to up the ante.

The forecast on Wednesday in Queensland is pretty clear. However, there is a slight chance of rain making its presence felt during the match. The temperature is expected to hover around 23-24 Degrees Celsius during the action in the middle according to AccuWeather.

The Carrara Oval has hosted a couple of matches so far this season and both have been decently high-scoring affairs. This is the last game at the venue and no wonder the curator is expected to dish out another surface full of runs. In both the games, the team batting first won the match and it will be interesting to see what the sides opt for on Wednesday.

Tom Banton has been included in the Heat’s 13-man squad for this match. He replaces Mitchell Swepson who has joined Australia’s Test squad for the New Year’s Test.

The Perth Scorchers have named an unchanged 13-man squad for this match.

Chris Lynn is coming off a sensational 94-run knock off just 35 balls and he should be your top pick for this match. Tom Banton is hitting the ball well and it is a no-brainer to have him in your Dream11 Fantasy team. With the ball, Lalor and Laughlin should deliver at the death earning more fantasy points.

For the Scorchers, the skipper Marsh (119 runs) and Livingstone (100 runs) will be key with the bat. Chris Jordan (7 wickets at 17.14) is a must in your team given his death bowling prowess. 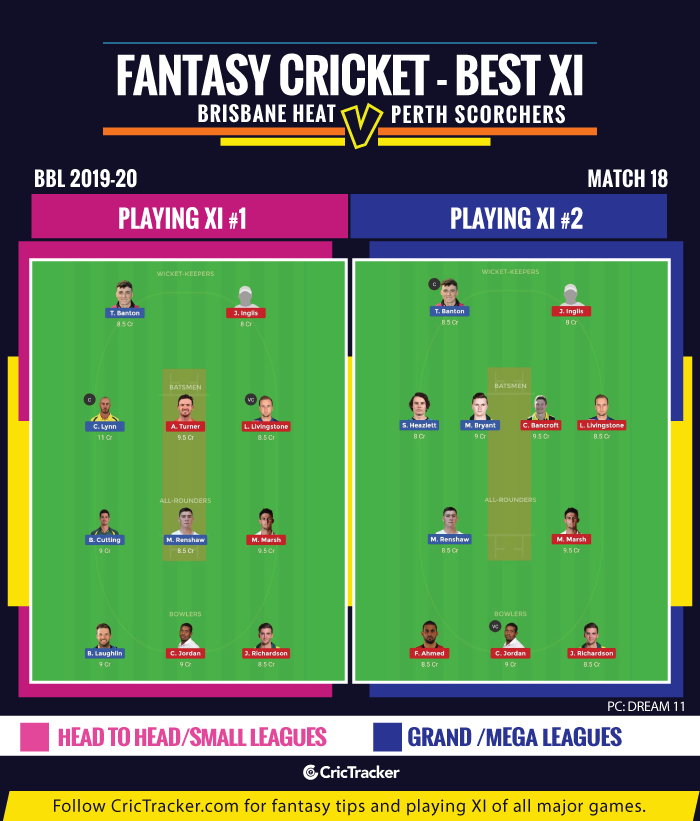 Max Bryant hasn’t got off to a great start in this season so far. But he is a brilliant batsman and a big knock might just be around the corner from him. It wouldn’t be a bad option to make him captain of your Grand League Fantasy team.

Swepson isn’t the part of the squad for this game. He has been picked in the 63% of teams. Do not pick him in your Dream11 Fantasy team.

Brisbane Heat is expected to win this match.