One of captain or vice-captain options should be the Australian batsman or bowler as the local players have a better idea of the conditions.

The 2nd match of the Big Bash League (BBL) 2019-20 will be played between Sydney Sixers and Perth Scorchers at the Sydney Cricket Ground in Sydney.

The Sydney Sixers and Perth Scorchers will get their campaign underway in the second match of the ongoing Big Bash League (BBL) 2019-20. The Sixers, led by Moises Henriques, qualified for the semi-finals last season and with their talisman, Steve Smith expected to play a few games during the season, they will once again hope to punch above their weight. Even Nathan Lyon will feature in the BBL this season after the ongoing Test series against New Zealand.

The Scorchers, on the other hand, will miss their veteran Michael Klinger who has retired from all forms of the game. The three-time champions endured a forgettable season last time around as they managed to win only four matches out of 14. Having said that, the franchise has signed the likes of Liam Livingstone and Chris Jordan this season and will hope for a better show in this edition.

The pleasant atmosphere will greet both the teams at the SCG on Wednesday evening. The sun will be out for the whole day with no chance of rain whatsoever. The temperature will hover around 22-24 Degrees Celsius during the match according to AccuWeather.

The SCG pitch is historically known to aid the spinners. But with this being the start of the season, the surface is expected to be flat on which the batsmen will enjoy their time. Going by the records, batting first has been a safe bet at this venue. However, the team winning the toss might bowl first just to check the behaviour of the pitch to start with.

Steve Smith and Nathan Lyon won’t be available due to their international commitments. Josh Hazlewood and Jackson Bird are ruled out of this match due to injury and haven’t been included in the 12-man Sydney Sixers squad.

James Vince, who was playing in the Mzansi Super League (MSL) recently, has joined the Sixers and is available for selection.

Both the sides have named their respective squads for this encounter and the XIs will be picked from those players only.

James Vince didn’t set the stage on fire in the MSL but he did enough to get the team off to a brilliant start batting at number three. Vince amassed 226 runs in eight outings at a strike-rate of 141.25 and looks in good touch with the bat. Daniel Hughes was the leading run-getter in the Marsh One-Day Cup as he plundered 440 runs in seven matches at an impeccable average of 73.33 and will hope to replicate similar kind of performances with a better strike-rate.

Henriques, Curran and Silk are also decent players in their respective departments and can come good when it matters the most. As far as the Scorchers are concerned, Liam Livingstone is a very good player in the shortest format. But he could only muster 208 runs in nine outings at a not-so-great strike-rate of 128.39 in the MSL. Chris Jordan is always a great option to have in your Dream11 Fantasy team given his exceptional death bowling skills and he is no mug with the bat either. 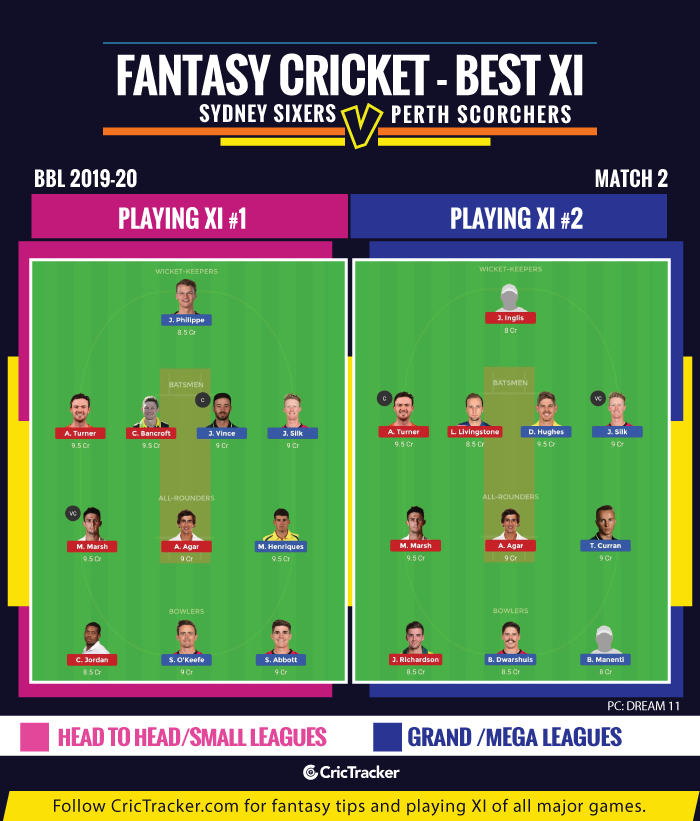 One of captain or vice-captain options should be the Australian batsman or bowler as the local players have a better idea of the conditions.

Ashton Agar delivers four tight overs picking up wickets consistently and also bats decently scoring around 30 runs. He can be made captain in Grand League contests.

Andrew Tye is injured and won’t be playing the most part of the BBL this season. But he has been picked by 79% of the teams in Dream11. There is no need to select him in your team at all.

Sydney Sixers are expected to win the match.