Will the Renegades be able to finally register their first win of the season?

Match 20 of the ongoing Big Bash League (BBL) will see the winless Melbourne Renegades taking on the Sydney Sixers at the Docklands Stadium in Melbourne. The defending champions are struggling this season and have lost all of their four matches thus far. The Aaron Finch-led side lost to the Adelaide Strikers by 18 runs chasing down 156 at the same venue.

However, this time around, they will be hoping to finally get those elusive two points on the board. Having said that, the Sydney Sixers are no pushovers by any means. They are coming off a thrilling super over win against the Sydney Thunder. Tom Curran was the hero for the Men in Pink as the England international put up an all-round display to snatch victory from the jaws of defeat for his team.

While the Sixers have won three out of five matches and stand at the fourth position in the points table, the Renegades are stuck at the bottom without any wins so far.

The game between the Renegades and the Strikers witnessed a traditional pitch behaviour at the Docklands. The Strikers comfortably defending 156 runs after opting to bat first. Another similar kind of a surface is expected to be dished out for this game. As far as the weather is concerned, there is no rain in the forecast and it will be a perfect day for cricket.

Harry Gurney is not available for this game as he has returned to England to attend his brother’s wedding. The Renegades have included the left-arm spinner Tom Andrews in the 13-man squad and he might get a go. Having said that, Joe Mennie and Tom Cooper are also waiting for their chance and the team is likely to opt one of them in the playing XI. The rest of the team might not change.

Sean Abbott is suffering from a moderate side strain and has been ruled out of a few upcoming games. Hayden Kerr has also been left out of the 13-man squad for this match with James Vince likely to play this game. The England batsman was cleared of any structural damages to his left elbow and will most probably be fit in time for this match. Steve O’Keefe and Mickey Edwards have made it to the squad as the former will play most likely play this match.

The prediction is for the Melbourne Renegades to win the match. 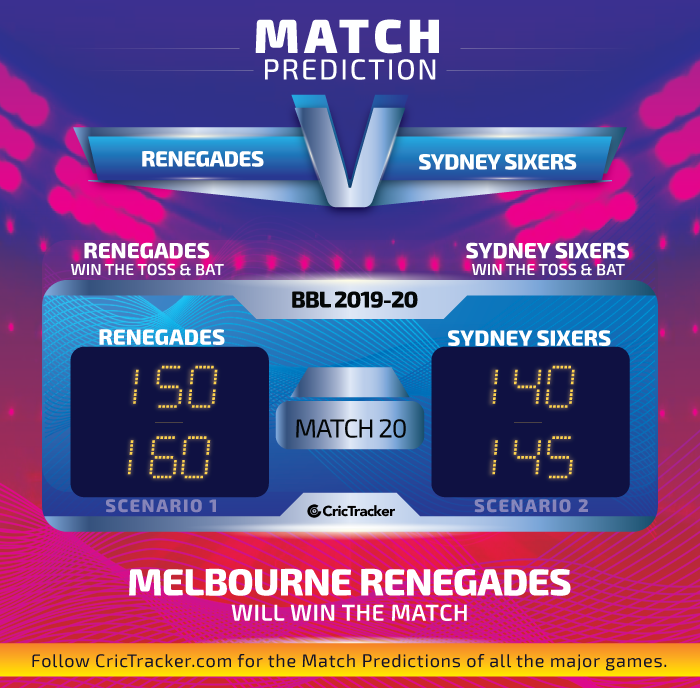