On head-to-head count, both sides are locked on five victories each.

Sydney Sixers are placed second in the points table of the 2019-20 BBL. But in their last two matches, Melbourne Renegades and Sydney Thunder gave them a run for their money. It was James Vince and Jordan Silk’s calm head that took the Sixers over the line against the Renegades. They are next set to lock horns with Adelaide Strikers at the International Sports Stadium, Coffs Harbour.

A victory will take them to the top, but the Strikers won’t be an easy proposition. The Strikers are third on the table with seven points from five matches. They had to face defeat by three runs in their last game versus the Sydney Thunder. On head-to-head, both sides have won five matches each. It’s also the first time, the Sixers and Strikers would be playing away from the SCG and Adelaide Oval.

The venue is yet to host a T20 and hence, it’s tough to gauge the nature of the strip. Due to the uncertainty, both sides should look to field first and understand the dynamics of the surface. There will be chances of rain, especially from 8 PM onwards. The clouds will be there throughout with the temperature around the 24 degrees Celsius. The humidity will mostly be in the mid-80s.

Josh Hazlewood has returned to the Sixers, replacing Mickey Edwards. Moises Henriques has returned to Sydney for the birth of his first child with wife Krista. He has been replaced by Justin Avendano. In Henriques’ absence, Daniel Hughes will be the stand-in skipper. The Sixers’ bowling has been frugal, but the batsmen haven’t quite set the stage ablaze with most of them getting starts.

Michael Neser has joined the Strikers after being released from Australia’s Test squad. Leg spinner Liam O’Connor has been drafted in the 13-man squad as well. Wes Agar and Harry Nielsen have been left out. Jonathan Wells, Jake Weatherald and Carey have done the chunk of the work in the batting department. Cameron Valente and Billy Stanlake need to take care of their economy rate. 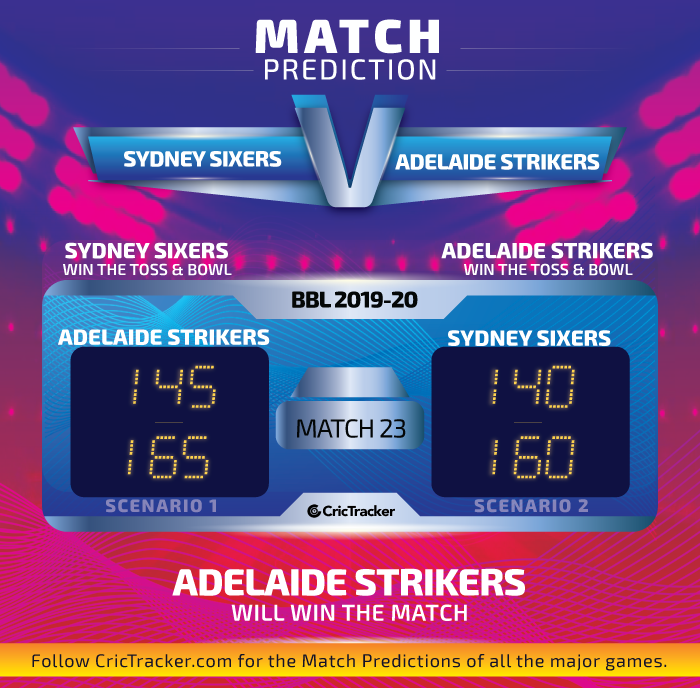