Hobart Hurricanes have been struggling with inconsistent performances so far in the season.

As the extravaganza of BBL 2019-20 is progressing into its latter stages, fans are witnessing enthralling catches, stunning hat-tricks and record-breaking centuries. In what anticipates to be a nail-biting clash. Sydney Thunder and Hobart Hurricanes are slated to clash in Match 31 of the BBL 2019-20.

Sydney Thunder have had a substandard campaign so far this season. Thunder have registered victory in only three out of eight matches in the tournament and are currently poised at the fifth position in the points table. Skipper Callum Ferguson will be eager to break into the top half of the points table by triumphing in this encounter. In their previous game against Melbourne Stars, Thunder failed to defend their 145-run total as the duo of Stoinis and Maxwell stole the match away from Thunder.

However, one positive for Sydney Thunder was the performance of their top-order batting force. Usman Khawaja, Alex Hales, Callum Ferguson and Matthew Gikes contributed with crucial knocks to propel Thunder to post 145 runs on the scoreboard. However, Thunder’s main concern will be the inefficiency of their bowling attack, which failed to spark against Melbourne Stars.

Hobart Hurricanes have also been struggling with inconsistent performances so far in the season. In seven matches, Hurricanes have amassed only six points and are currently sitting second-last in the points table. Skipper Matthew Wade, who was the top-scorer for his side in their previous match against Brisbane Heat, will be hoping to register a fourth win in the competition.

Wade was the solitary player for Hurricanes who was effective in their match against Brisbane Heat. The inefficiency of their batting force will also be a matter of concern for Matthew Wade and Co. David Miller has also failed to deliver explosive batting performances this season. After posting a modest score of 126 runs against Brisbane, Hurricanes’ bowling unit was not successful in restricting Heat’s batting line-up. Scott Boland, who scalped three wickets in his spell, was the pick of Hurricanes’ bowlers.

Sydney Showground Stadium has hosted only two matches so far in the tournament. The first match at this venue witnessed both the team click the 140-run mark. However, the second match turned out to be a low-scoring affair due to rain interruption. Showers are also on the cards for this match with moderate humidity levels. The temperature is expected to hover around 21 degrees Celcius according to AccuWeather.

Thunder’s top-order comprising Callum Ferguson and Usman Khawaja have delivered impressive knocks in the initial overs. Despite bolstering a formidable batting attack, Thunder have been struggling to find consistency this season. The Callum Ferguson-led side also has Alex Hales and Matthew Gilkes in its batting arsenal. However, their bowling attack, comprising Chris Morris and Daniel Sams needs to turn up against Hurricanes.

Hurricanes are equipped with many match-winners in their squad. Matthew Wade is expected to lead their batting line-up from the front along with George Bailey and David Miller. Scott Boland, who scalped three wickets in his previous match, will be hoping to replicate his performance. Hurricanes also have Qais Ahmad in their bowling line-up, who has the potential to scalp wickets at regular intervals.

The prediction is for the Hobart Hurricanes to win the match. 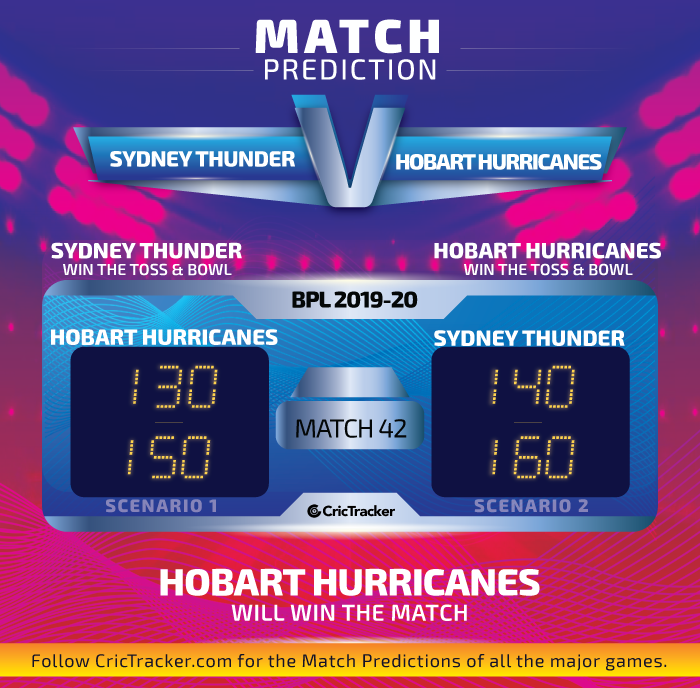