Both sides have got pretty handy all-rounders in Rashid Khan and Mohammad Nabi and opting for them as captain/vice-captain in your Grand-league team can be worth a punt.

The 33rd match of the 2019-20 Big Bash League will be played between Adelaide Strikers and Melbourne Renegades at the Adelaide Oval in Adelaide.

After starting their 2019-20 campaign on a resounding note- three wins in the first seven games- the Adelaide Strikers are currently through a mid-season crisis. They have proceeded to lose three back-to-back games and are in desperate need of revival if they are to stay in the reckoning for the knockout stage.

They come into this game on the back of a two-wicket defeat at the hands of Sydney Sixers after a lackluster batting effort saw them scrap their way to 135 all-out in 19.4 overs; a target which was chased by the Sixers, despite a brilliant hat-trick from Rashid Khan [4/22].

Melbourne Renegades, on the other hand, will be looking for that elusive win in the tournament. After having lost eight games on the bounce, their chances of making it to the playoffs are but over. Their latest defeat came at the hands of table-toppers Stars’ thanks to Glenn Maxwell’s whirlwind knock of 45-ball 83* that ensured that the latter overhauled the target of 7/168, set by the Renegades with aplomb.

It is expected to be a bright and sunny day in Adelaide on Sunday. According to AccuWeather, bright sunny spells will be a feature around the beautiful city of Adelaide throughout the day. While the temperature is set to be between 16-29 degrees Celsius, the humidity is set to hover around 41%.

The pitch at the Adelaide Oval has always been a good batting pitch to bat on and it has proved that way in this season. While the sides’ have racked up in excess of 160 in two of the three games played at the venue, the chasing sides have found it tough, considering the pitch gets slower and slower as the game wears on.

Average first innings score:– 167 [In the three games at the venue this season]

Harry Nielson will take up the gloves.

Leg-spinner Liam O’Connor has been added in place of Cameron Valente.

The defending champions Renegades will be bolstered by the addition of star Afghanistan all-rounder Mohammad Nabi. Nabi replaces Richard Gleeson in the squad, as does Nathan McSweeney, who comes in place of Luke Robbins.

Travis Head will make his comeback into the side, and the onus will be on him to lead the side in place of Alex Carey. Apart from Head, Jake Weatherald, who is the leading run-scorer for his side- 266 runs at 38.0- and Jonathan Wells [234 runs at 78.0] will be the key with the bat.

Rashid Khan claimed a hat-trick in the last game against the Sixers. He is also the leading wicket-taker- 12 wickets at 15.33- for the Strikers. He, along with Peter Siddle [7 wickets] and Billy Stanlake will be the key.

Shaun Marsh [68], Marcus Harris [42] and Beu Webster [25] were the cornerstones in the Renegades getting 7/168 in the last game. Mohammad Nabi has joined the squad. The all-rounder, who boasts an economy rate of just 6.65 per across the past two BBL seasons, was one of the major reasons in the Renegades qualifying for the finals last season. He, along with Cameron Boyce [6 wickets] will be key with the ball. 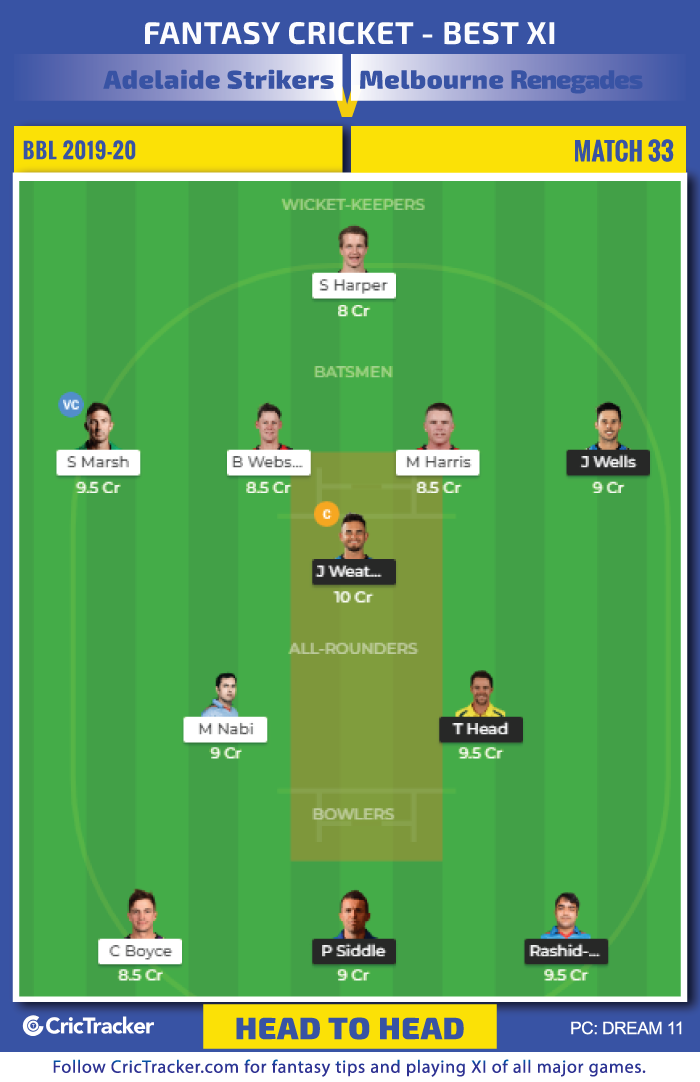 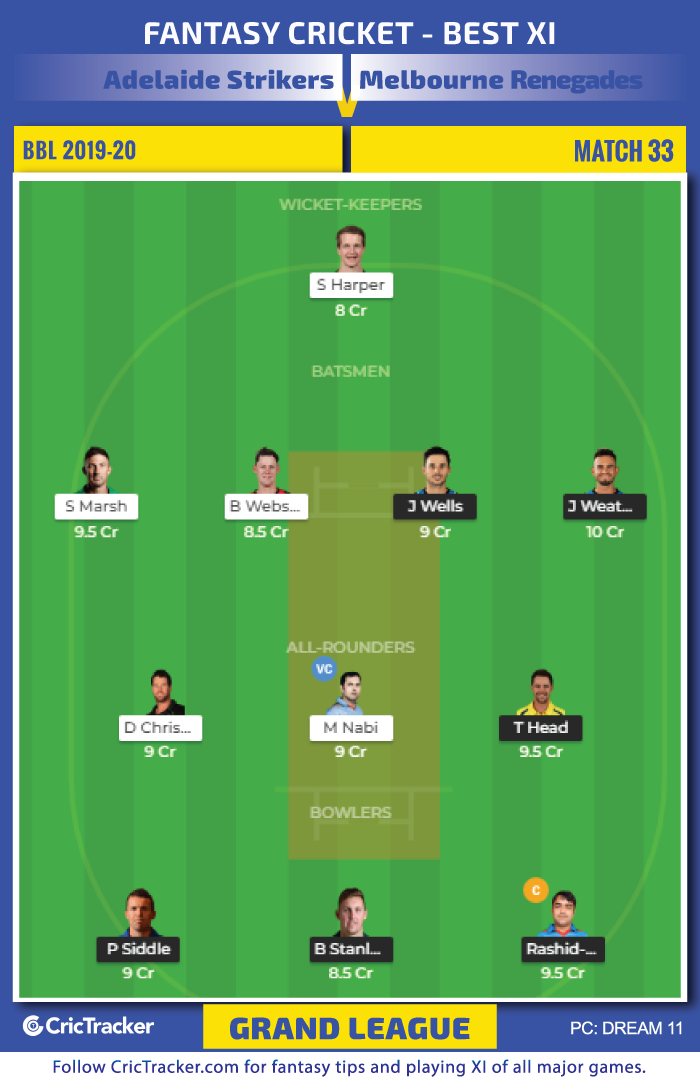 Both sides have got pretty handy all-rounders in Rashid Khan and Mohammad Nabi and opting for them as captain/vice-captain in your Grand-league team can be worth a punt.

Adelaide Strikers is expected to come out as the winners.