The Heat lost all their four games against the Strikers at The Gabba.

Adelaide Strikers, after a decent start in the BBL 2019-20, lost three games in a row. But the team, led by Alex Carey, made a strong comeback, beating the Melbourne Renegades by 63 runs at the Adelaide Oval. Their next contest is against the Brisbane Heat on Tuesday at The Gabba in Brisbane. A victory would help them topple the Perth Scorchers to the third position in the points table.

The Heat, on the other hand, are languishing sixth on the table. However, they are in a decent run of form after beating the Hobart Hurricanes twice and the Sydney Thunder in a rain-curtained game. The 34-run defeat at the hands of the Perth Scorchers ceased their three-match winning streak. As far as head-to-head is concerned, the Heat have lost all four matches at home against the Strikers.

The pitch in Brisbane may not be an absolute belter as it has shown signs of slowing down significantly. But since both sides have a potent batting order, hence, they won’t mind chasing either. The conditions aren’t promising with chances of rain during game-time. The clouds will be there throughout. The temperature will be around 26 degrees Celsius with the humidity in the 60s.

AB de Villiers has replaced Tom Banton in the batting order. Mujeeb Ur Rahman have joined the Heat as well after his stupendous campaign in the BPL. Chris Lynn in their top run-getter with 265 runs at a strike-rate of 161.58. The rest of the batting has under-performed a wee bit. Ben Laughlin, Jos Lalor and Zahir Khan Pakteen have done a chunk of the work with an overall tally of 27 wickets.

The Strikers have persisted with the same 13-man squad. The trio of Jonathan Wells, Alex Carey and Jake Weatherald have 292, 266 and 293 runs respectively. The rest of them needs to show a bit more consistency. Rashid Khan is their leading wicket-taker with 14 scalps at an economy of 7.16. The tweaker has gotten good support from Peter Siddle, who has 10 wickets to show for his efforts. 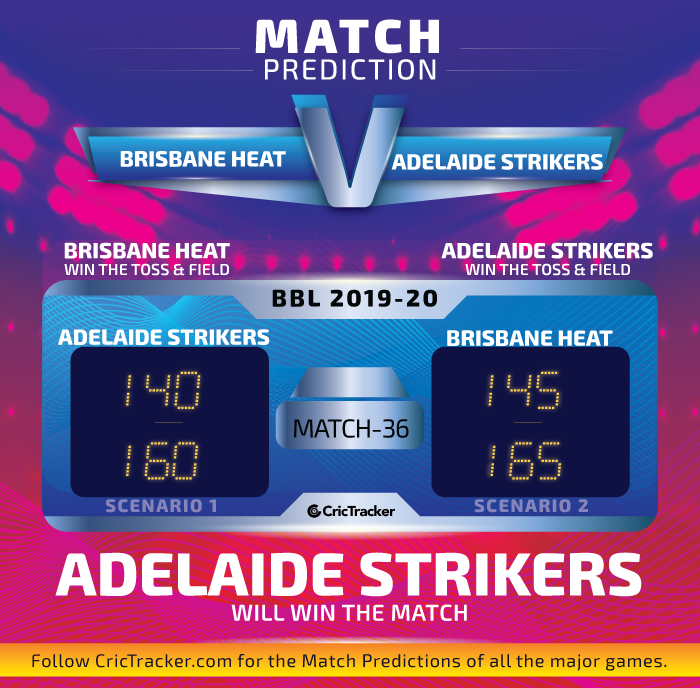