The Adelaide Strikers looked a formidable unit to start with in the ongoing BBL. However, their journey has seen a downward trend of late. The side, led by Travis Head, has lost four out of their last five matches and are precariously placed fifth in the points table. Their last loss by seven wickets at the hands of Brisbane Heat at The Gabba has somewhat rung the alarm bells in their camp.

The Strikers will again be facing the Heat, this time on Friday, January 17 at the Adelaide Oval. On the other hand, the Heat have emerged victorious in four out of their last five matches. Chris Lynn’s men are placed third on the table and are in decent enough rhythm. On head-to-head, the Heat have beaten the Strikers four times out of five games and would dearly to wish to extend the lead.

The pitch in Adelaide has been a belter for batting thus far. Stroke-making hasn’t been all that tough. The bowlers won’t be getting much room for error and need to be accurate. A fairly high-scoring match can be expected at the venue. The conditions will be bright and sunny with no chance of rain. The temperature will be around the 24 degrees Celsius mark with the humidity in the high 20s.

The Strikers have retained their 13-man squad from the last game. Fast bowler Peter Siddle split the webbing between his fourth and fifth fingers in the previous contest, but is confident of taking the field. Jake Weatherald and Jonathan Wells have 299 and 306 respectively and they will play a crucial role. In the bowling department, spinner Rashid Khan and Peter Siddle have 15 and 10 wickets.

The Heat haven’t tinkered with their 13-man squad. Laughlin missed the last match owing to a bruised heel and will be hope to be cleared. Lynn has 265 runs for the Heat and he can’t drop his guard. The middle-order has the likes of Renshaw and De Villiers. Lalor is their leading wicket-taker with 11 scalps. Pattinson is high on confidence after his fifer. Mujeeb and Swepson are in good rhythm as well. 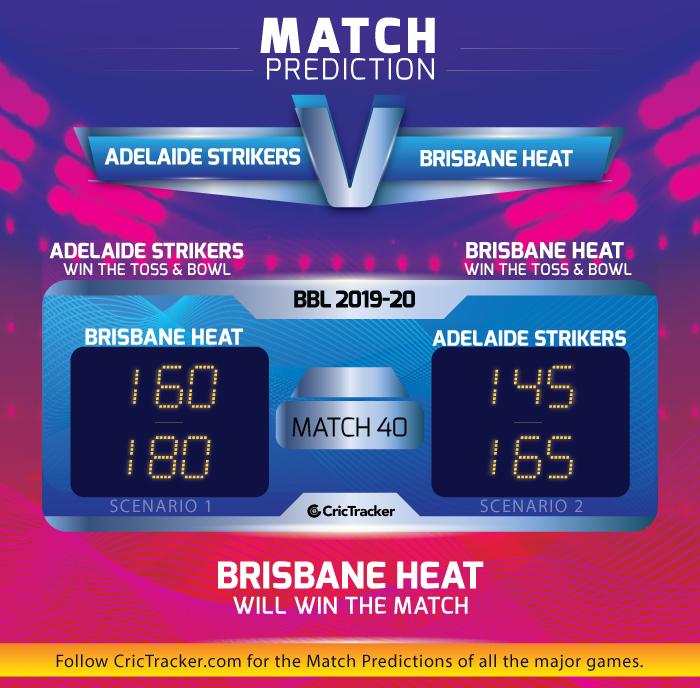