Josh Phillippe is due for runs. He hasn't been at his best in the last two games, maybe he turns it around in this match.

The 42nd match of the Big Bash League (BBL) 2019-20 will be played between Sydney Sixers and Sydney Thunder at the Sydney Showground Stadium in Sydney.

Saturday night will see the much-anticipated Sydney derby take centerstage when the Sixers and Thunder lock horns at the Showground Stadium in Sydney. The last time these two sides locked horns in the early stages of the competition, the fans were treated with a low-scoring nerve-jangler, one which eventually ended in a tie. In the end, it was the Sixers who pipped their counterparts in the Super Over.

The Sixers are well placed at the second spot in the points table and they will look to consolidate their position after their last game against the Hurricanes was washed out. Sydney Thunder, on the other hand, has lost three of their last four games, and they come into this game after having suffered a 12-run defeat at the hands of defending champions Melbourne Renegades.

Another damp squib could potentially be on the cards on Saturday. If the weather report is to be believed, Sydney is expected to be pretty wet on Saturday with consistent spells of rain expected to lash the city throughout the day. The temperatures are expected to range between 20-22 degrees celsius. Chances of rain- 100℅.

With rain expected to play a substantial part on Saturday, it might come down to even a 5-over shootout. That said, the fast bowlers might also come into the picture considering there will be considerable moisture to play with.

Average first innings score:– 141 [In the three completed games at the venue this season]

Sydney Thunder have named an unchanged squad for this fixture.

Sydney Thunder- The major reason for their defeat in their last game was the failure of their top-order- Usman Khawaja [0], Calum Ferguson [7], and it was only Alex Hales [31] who had some sort of start, but even he could not kickoff and convert it into a 70 or 80, which is what Thunder will hope, isn’t the case again on Saturday.

As far as bowling is concerned, Liam Bowe [2-23] was the pick of bowlers against the Renegades. He will be the one to watch out for on Saturday. These players can be picked in your Dream11 Fantasy side.

Sydney Sixers- Josh Phillippe missed out in the last two games and Sixers will hope that the swashbuckler regains his lost form. Along with Phillippe, Daniel Hughes, James Vince and skipper Moises Henriques will hold a key with the bat.

As far as bowling is concerned, Nathan Lyon is set to take his BBL appearance and he could be real handful on a slow Sydney pitch. He, along with Jackson Bird and Steven O’Keefe will be key. 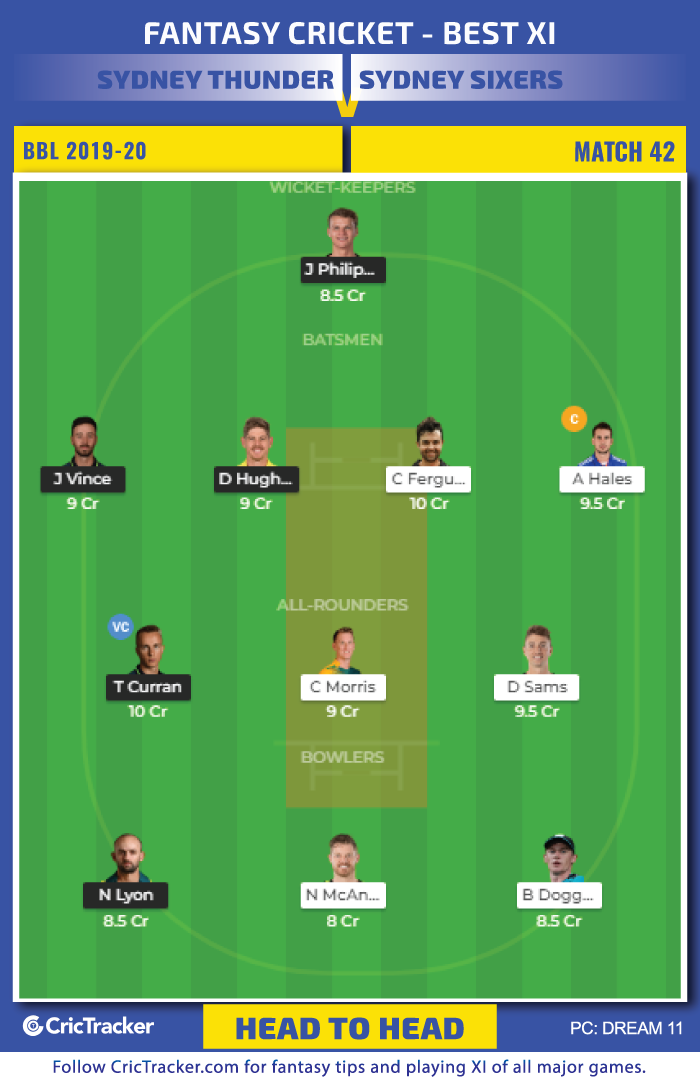 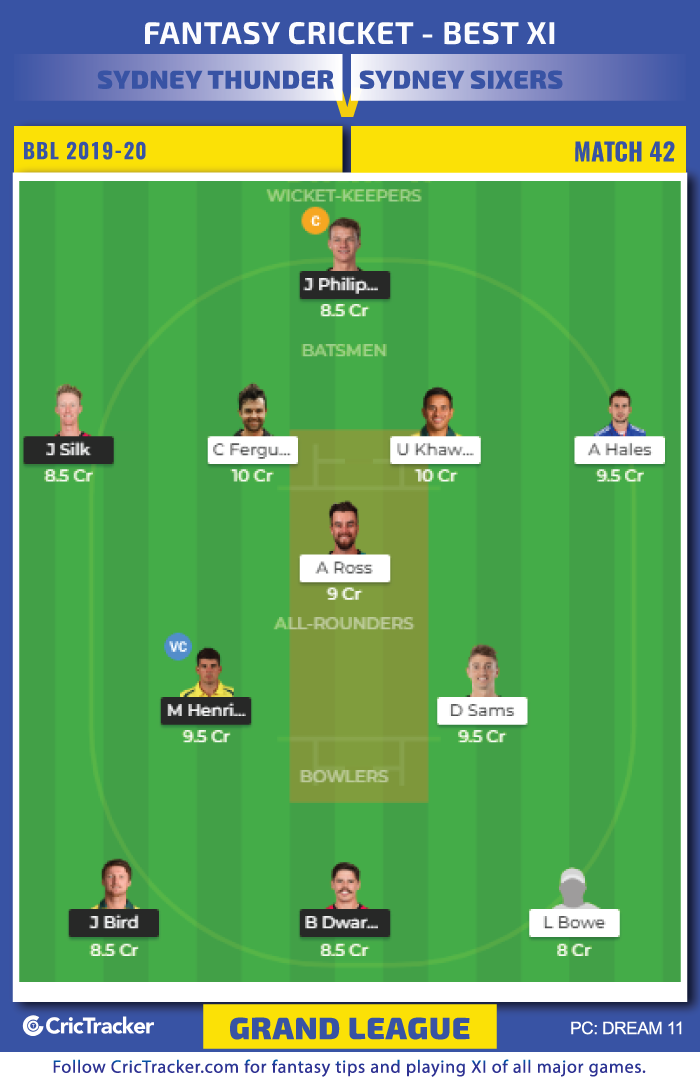 Josh Phillippe is due for runs. He hasn’t been at his best in the last two games, maybe tomorrow can be the day where he turns it around. Opting for him as captain in your Dream11 Fantasy team can be a good punt.

Sydney Sixers is expected to come out as the winners.