The 43rd match of the Big Bash League (BBL) 2019-20 will be played between Hobart Hurricanes and Adelaide Strikers at the Aurora Stadium in Launceston.

The 43rd game of the ongoing Big Bash League (BBL) will see Adelaide Strikers and Hobart Hurricanes in what is expected to be a riveting encounter on Sunday. The Strikers stormed back into the top-3 courtesy their ten-wicket mauling of Brisbane Heat in their last encounter and they will be looking to further consolidate their spot in the points table.

It was an all-round bowling effort by the Strikers- one that was spearheaded by Michael Neser’s 2-14 and a three-wicket haul from Liam O’Connor [3-30]- as they bowled the Brisbane Heat for 100 in 17 overs. The target was never going to challenge Strikers and the opening duo of Philip Salt [67*] and Jake Weatherald [33*] ensured that it was achieved without even breaking a sweat as they romped home in a mere 10.5 overs.

They’ll now face Hobart Hurricanes, who are currently languishing at the second-last spot in the points table, after having managed just three wins in nine games. Their last game was washed out due to rain, and they will be looking to revive their fledgeling fortunes on Sunday.

It is expected to be a partly cloudy day in Launceston on Sunday. According to the weather report,  the city is expected to have bright spells of sunshine followed by overcast skies. While the temperature is set to be between 12-26 degrees Celsius, the humidity is set to hover around 53%. Chances of rain- 20%.

In the only game played at the venue this season, the fast bowlers ruled the roost. With Sunday expected to be an overcast day, the pacers may once again have their say.

Average first innings score:– 69 [In the only T20 played at the venue this season]

The Adelaide Strikers have retained the same 13-member squad that beat Brisbane Heat by ten wickets in the last game.

The Hurricanes have also named an unchanged squad for Sunday’s fixture.

Hobart Hurricanes-  The Hurricanes batting unit – George Bailey, David Miller, Matthew Wade haven’t really risen to the occasion thus far, something that the franchise would hope, isn’t the case against a strong Strikers bowling unit. Thomas Rogers, Clive Rose and Qais Ahmed were the pick of the bowlers in the Hurricanes last completed fixture. These three will once again lead the bowling unit.

Adelaide Strikers- Jake Weatherald [33*] and Philip Salt [67*] accumulated a 100-run stand in the Strikers’ ten-wicket win over Brisbane Heat. The duo, along with Jonathan Wells will lead the batting unit. The cornerstone of their ten-wicket win was their all-round bowling effort- spearheaded by Liam O’Connor’s three-wicket-haul and ably backed up by Michael Nesser [2-14] and Wes Agar [2-15]. 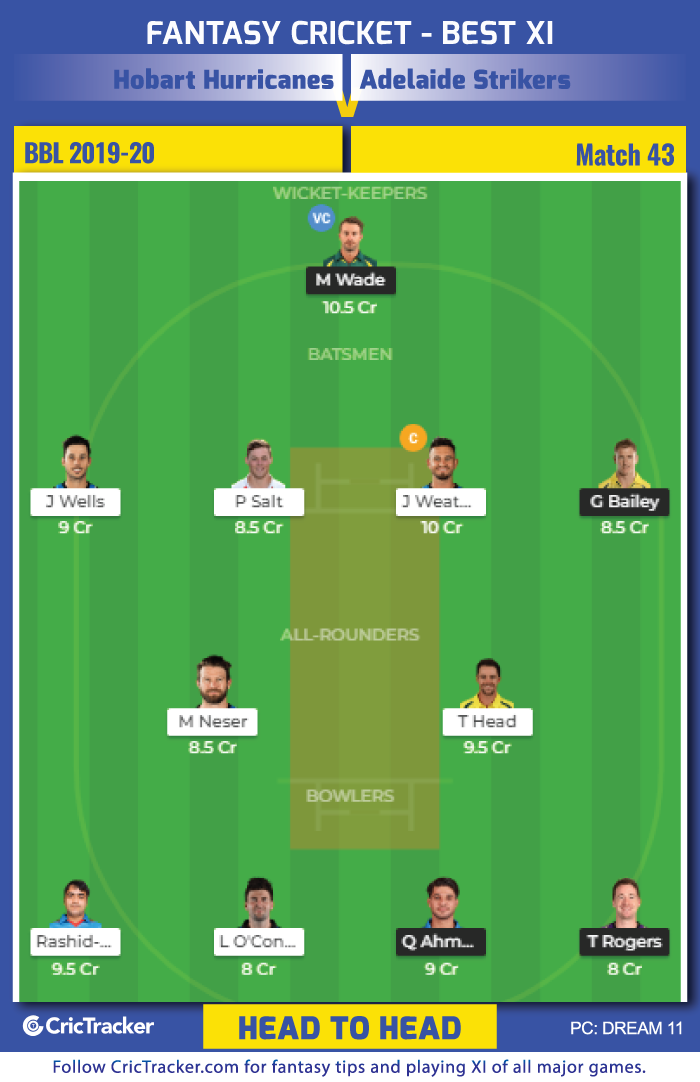 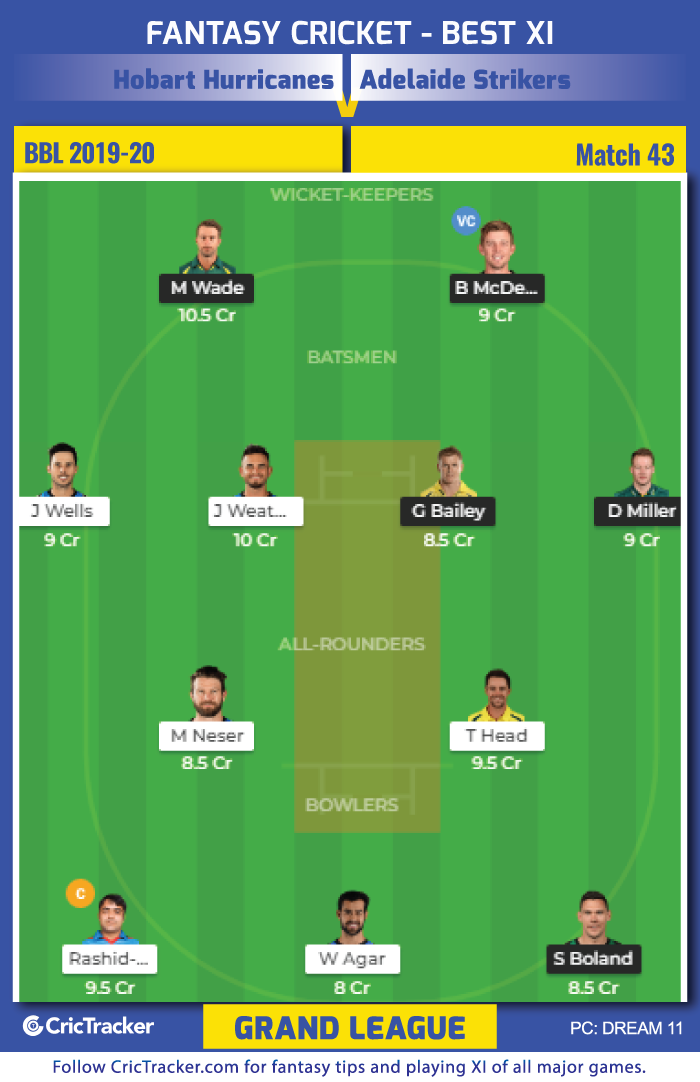 The Strikers bowling unit was the cornerstone in them winning the last game by ten wickets. Hobart Hurricanes batting has misfired throughout the tournament and hence opting for the likes of Rashid Khan or Michael Nesser as captain can be a good punt.