The Scorchers have made one change to their line-up.

The 46th match of the 2019-20 Big Bash League will be played between Perth Scorchers and Sydney Thunder at the Perth Stadium in Perth.

As the caravan of the Big Bash League approaches its business end, Perth Scorchers will play host to Sydney Thunder at the Perth Stadium as they aim to shrug off the ignominy of the ten-run loss at the hands of table-toppers Melbourne Stars, after they failed to chase down the total of 6-141.

They will now face Sydney Thunder, who comes into this game on the back of a four-run-win (DLS) at the expense of Sixers. The win was set-up by the pace-bowling duo of Chris Morris and Daniel Sams, who claimed five-wicket between them. The Thunder was required to chase down 75 runs as per the revised DLS start, but the consistent spells of rain that savaged the ground in the fifth over of their innings meant the game was called-off with them being ahead of the par-total.

It is expected to be a bright and sunny day in Perth on Monday. According to AccuWeather, Perth is set to be bathed with consistent spells of sunshine throughout the day. While the temperature is set to be between 21 and 29 degrees Celsius, the humidity is set to hover around 39%. Chance of rain- 0℅.

The track at the Perth Stadium has dished out high-scoring belters this season. Barring the last game where the Scorchers were knocked over for 86, the first innings totals have been in excess of 150, and the same can be expected tomorrow.

Average first innings score:– 170 [In the 5 games at the venue this season]

The Scorchers have made one change to their line-up. Liam Guthrie comes into the squad in place of Jaron Morgan, who has been omitted.

The Thunder have named an unchanged squad for the fixture.

Perth Scorchers- Once again the batting unit will revolve around Josh Inglis, Liam Livingstone, Mitchell Marsh and Kurtis Patterson, all of whom got starts in the last game but none of them could convert them into a substantial score.

Matthew Kelly claimed three wickets in the last game while Chris Jordan [0-25] and Jhye Richardson [1-23] could be key on this pitch.

Sydney Thunder- The batting unit will revolve around Alex Hales, Calum Ferguson and Usman Khawaja while the bowling will be led by Chris Morris and Daniel Sams, both of whom claimed five wickets between them in the last game. 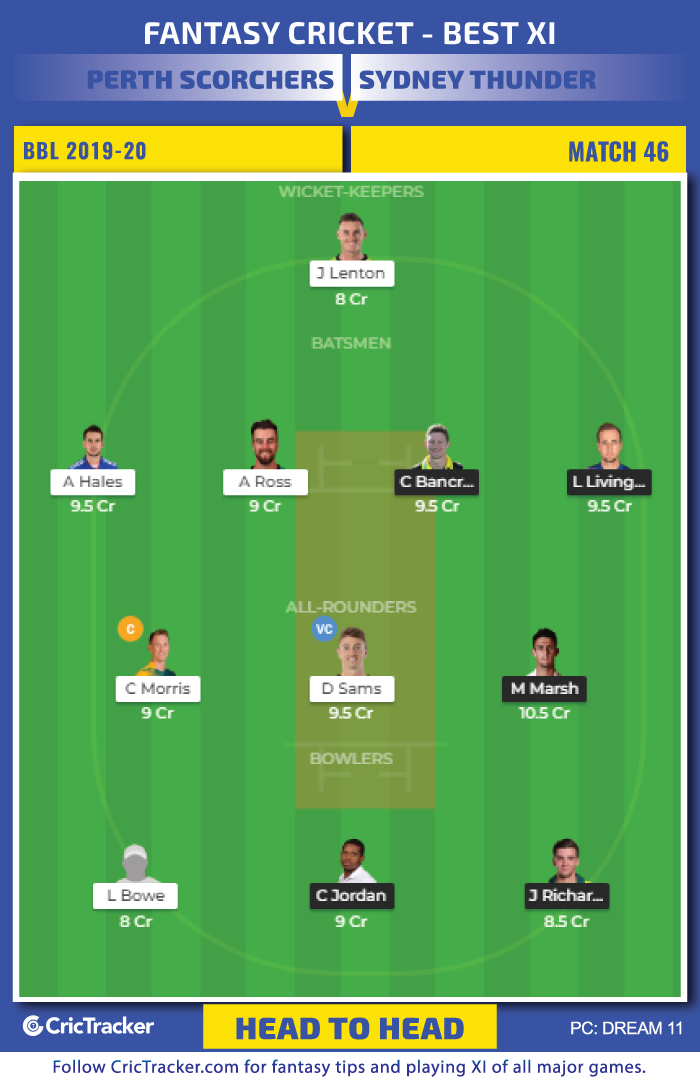 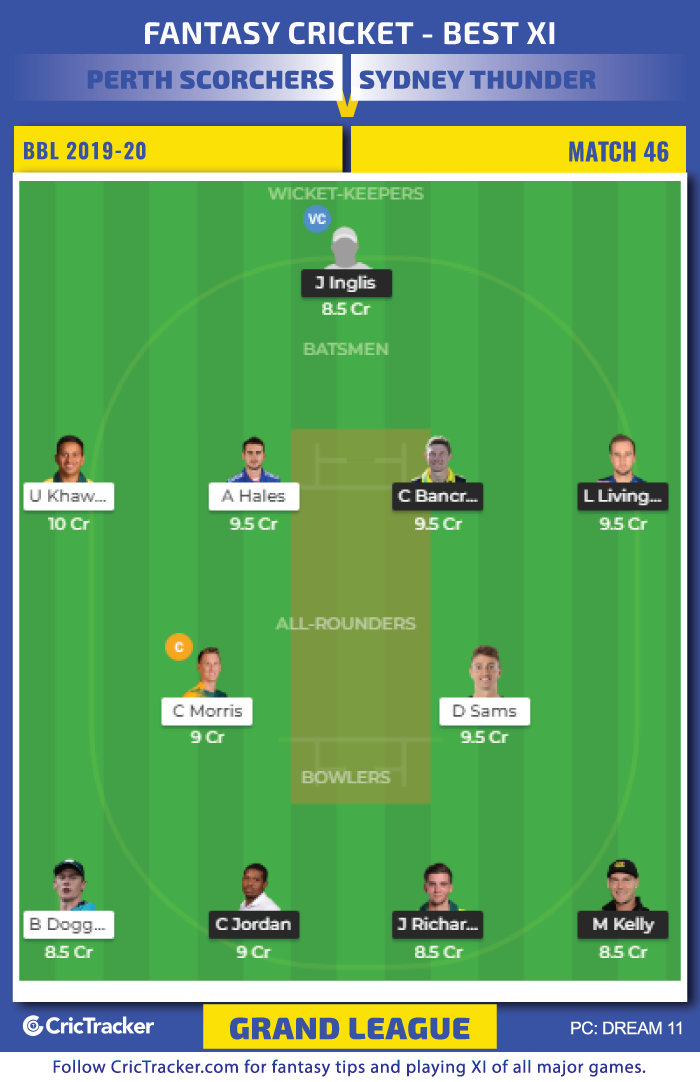 Both sides have got great good quality pace bowling attacks and with the pitch at Perth conducive to pace bowling, opting for the likes of Jhye Richardson, Daniel Sams could be a good punt.

Perth Scorchers are expected to come out as the winners.