Melbourne Renegades are expected to come out as the winners.

The 47th match of the 2019-20 Big Bash League will be played between Melbourne Renegades and Hobart Hurricanes at the Docklands Stadium in Melbourne.

It is incredible really how things can change after a win. The defending champions, Melbourne Renegades, couldn’t win a game in their first nine fixtures, but now they have won two in a row.

Their second win was championed by the all-round bowling performance- led by Cameron Boyce 4-15 and ably supported by Dan Christian [2-9] and Samit Patel [2-22]- which proceeded to inflict a collapse for the ages as Brisbane Heat lost their last seven wickets for 7 runs.

They will now face Hobart Hurricanes, who despite a whirlwind 48-ball 90 from David Miller, fell to a 10-run defeat at the hands of Adelaide Strikers, after none of their batsman barring ‘Killer Miller’ could post a substantial score in their run-chase of 187.

If you look at the past three games played at the Docklands Stadium, the spinners have ruled the roost, while the fast bowlers too have had a good time. With Tuesday expected to be an overcast day, the same could be the case when the Renegades lock horns with the Hurricanes.

Average first innings score:– 158 [In the last 3 games at the venue this season]

The Renegades have made one change to their line-up. Nathan McSweeney comes into the squad in place of Joe Mennie, who has been omitted.

The Hurricanes have named an unchanged squad for tomorrow’s fixture.

Melbourne Renegades- The trio of Shaun Marsh, Sam Harper, and Beu Webster have been the bedrock of the Renegades’ batting-unit, and they will once again be the key to their fortunes. Cameron Boyce’s four-wicket-haul broke the back of the Heat batting unit in the last game. These players should be picked in your Dream11 Fantasy side.

Hobart Hurricanes- David Miller scored a whirlwind 90 in the last game but none of the other batsmen in Matthew Wade, Caleb Jewell, Jake Doran, and Ben McDermott could kick on and post a substantial score, paving way for a ten-run defeat. Scott Boland [2-26] and Nathan Ellis [1-33] were the pick of the bowlers for Hobart in their last game. 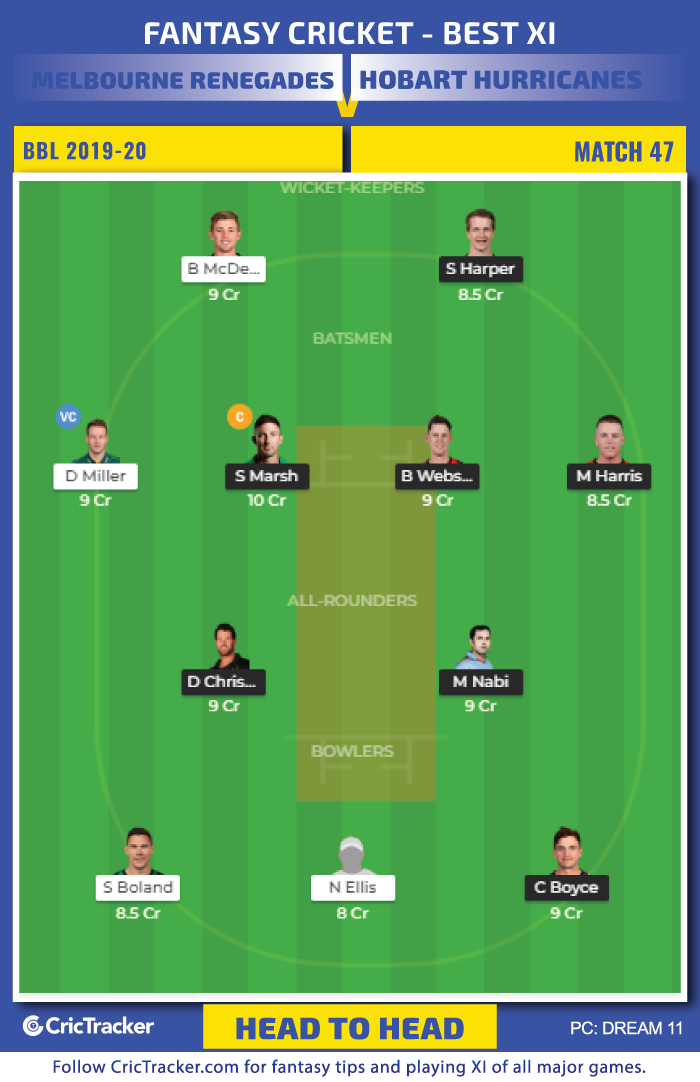 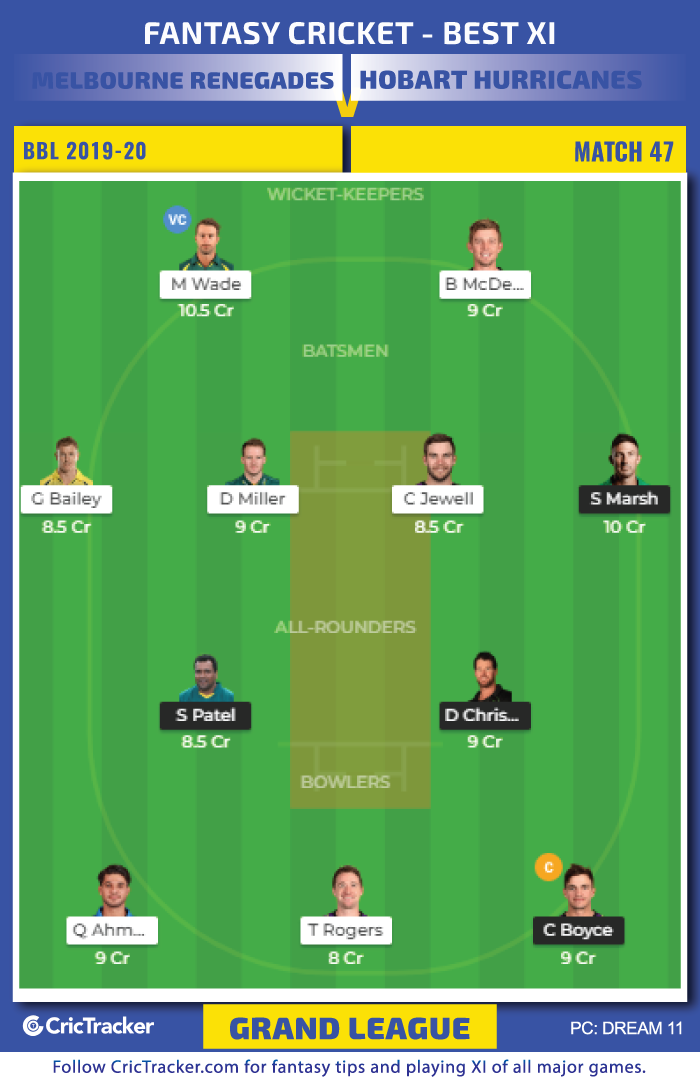 Both sides have good T20 batsman in the form of Shaun Marsh, David Miller. Hence opting for them as captain/vice-captain of your Dream11 Fantasy side can be a good punt.

Melbourne Renegades are expected to come out as the winners.