Moises Henriques and James Vince are in good form in the ongoing tournament.

The 52nd match of the 2019-20 Big Bash League will be played between Sydney Sixers and Melbourne Renegades at the Sydney Cricket Ground in Sydney.

Sydney Sixers are currently ranked 2nd in the points table with 17 ratings. They have won back to back two games and would be eager to continue with their top-notch form in the next match against Melbourne Renegades. It will be a crucial game for the Sixers if they want to retain their position at the end of the league stage of BBL 2019-20. Josh Philippe is in impressive form with the bat in the ongoing tournament and he is currently the leading run-scorer for Sixers. Meanwhile, their seaming all-rounder Tom Curran has played a significant role with his brilliant performances for his side.

Melbourne Renegades have already been ruled out of the tournament. However, they will have an opportunity to come and play with a free mind. They will certainly be a threat as they won their two out of their last three games. Renegades will bank on returning Aaron Finch and Beau Webster in the upcoming match. The duo has contributed well with the bat in this season for their side and the same will be expected from them against Sydney Sixers.

Unfortunately, the chances of rain are quite high with precipitation of 78% on the match day. The wind is expected to blow at a rate of 18 km/hr to 22 km/hr. Meanwhile, the temperature will deviate between 24 and 26 Degree Celsius throughout the day according to Accuweather.

The pitch at the SCG will offer a stiff battle between bat and ball. The fast bowlers will get a lot of help from the wicket as well as some swing due to the windy conditions. Meanwhile, the batters will have to get settled before smashing the fast bowlers all across the park. Also, the side winning the toss will look to bat first as far as the trends of the tournament are concerned at this venue.

Average first innings score:– 125 [In the 4 completed games at the venue this season]

Sydney Sixers have opted for one change from the squad that defeated Brisbane Heat. Josh Hazlewood comes in for Ben Manenti for the final league game against Melbourne Renegades.

Captain Aaron Finch and paceman Kane Richardson, Brayden Stepien and Zak Evans have been included in the 13-man squad for the clash against Sixers. Meanwhile, Shaun Marsh has been ruled out due to a hamstring injury. Jake Fraser-McGurk, Marcus Harris and Andrew Fekete are also among the ones that have been excluded from the Renegades squad. 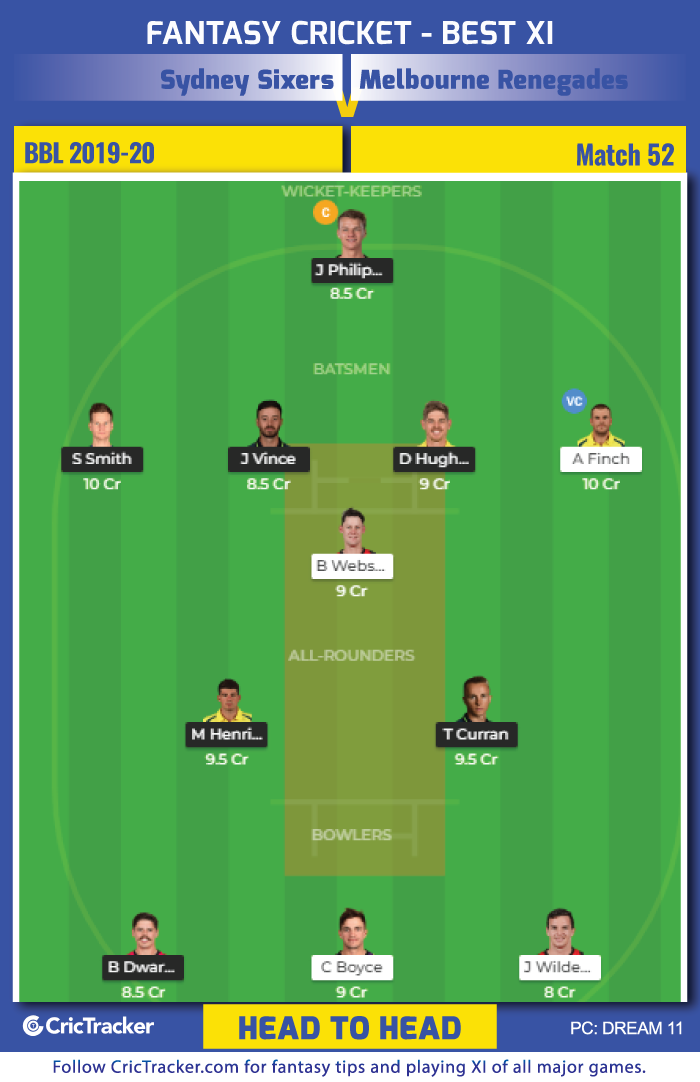 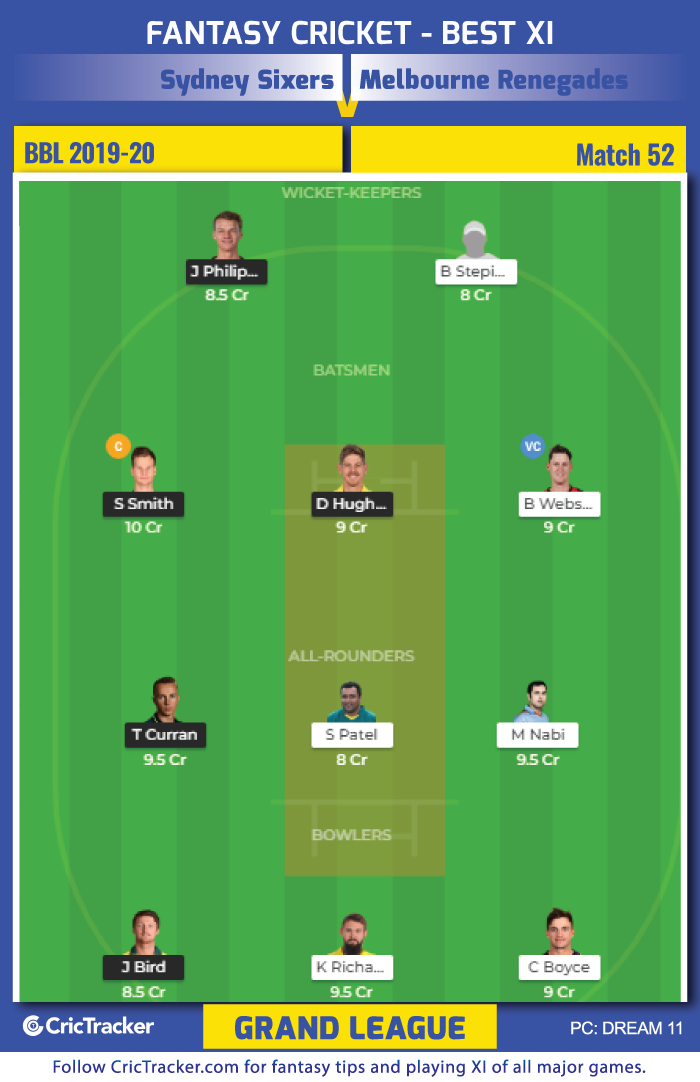 Aaron Finch joined Renegades after a brilliant ODI series against India. He looked in good form with the bat and the Aussie international will look to replicate his form in the upcoming game as well.

Melbourne Renegades can opt for some surprising changes in the playing XI as they have already been ruled out from the race to qualify for the semi-finals. So, it will be fruitful to wait for the confirmed team for the upcoming match.