On head-to-head, the Strikers have an 8-4 lead over the Hurricanes.

The Adelaide Strikers are on a three-match winning streak in the ongoing edition of the Big Bash League (BBL). However, Travis Head and Co are in desperate need for another victory in order to finish in the top two. A triumph will help them topple the Sydney Sixers. They are next scheduled to lock horns with the Hobart Hurricanes in their last round-robin match at the Adelaide Oval.

The Hurricanes, on the other hand, are placed in the points table. The team, led by Matthew Wade, are in a precious position with Sydney Thunder and Brisbane Heat breathing on their necks. They need a win to stay in contention for the fifth spot in the table. On head-to-head, the Strikers have an 8-4 lead over the Hurricanes. In Adelaide, the Strikers have won five out of seven encounters.

The pitch at the Adelaide Oval is one of the better ones for batting in Australia. Bowlers will have to work hard to pick up wickets. Both teams have a strong batting unit and won’t mind batting second. There are no chances of rain with no clouds either. The temperature will be around the 23 degrees Celsius mark. The humidity will mostly be in the 50s and 60s during match time.

The Strikers have an in-form batting. Jonathan Wells is their leading run-scorer with 429 runs. He has gotten the apt support from the likes of Alex Carey, Jake Weatherald and Phillip Salt. Travis Head has 149 runs in five innings. In the bowling area, Rashid Khan is their top wicket-taker with 18 scalps. Peter Siddle and Wes Agar have been exceptional well, picking up 17 and 16 wickets respectively.

D’Arcy Short and Matthew Wade will hold the key at the top of the order. Macalister Wright is coming off a 70* and is in good rhythm. Ben McDermott can think about promoting himself with the kind of form he has been in. Scott Boland and Qais Ahmad have 12 wickets each to their name. Ellis has done reasonably as well. It’s also time for Faulkner to bring forth all his experience. 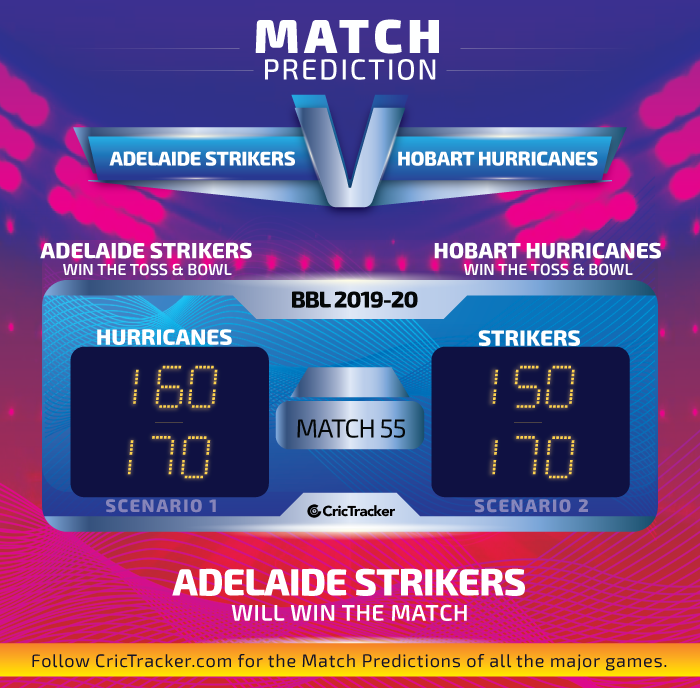