The Heat would be mindful of the batting collapse they suffered at the hands of the Renegades last time around.

The Brisbane Heat managed to stay alive in the 2019-20 edition of the BBL after thrashing the Melbourne Stars by 71 runs at the MCG. However, Chris Lynn and Co’s job isn’t over just yet. The Heat are scheduled to lock horns with the Melbourne Renegades in their last round-robin match on Monday, January 27. The match at the Docklands Stadium is a do-or-die affair for the visiting team.

Ahead of the last game, the Heat would be remembering the batting collapse they suffered at the hands of the Renegades at the Gabba. In that game, the Heat lost their last seven wickets for seven runs. For the home team, they are left with no chance of progressing to the next round. Aaron Finch’s ton in their previous game went in vain and Renegades would wish to sign off positively.

The pitch at the Docklands Stadium has been a sporting one thus far. Scoring in excess of the 150-run mark has been a norm. Moreover, the team, batting second has gotten a fair bit of advantage. There are no chances of rain in Monday’s match. The conditions will be hazy with the temperature around the 23 degrees Celsius mark. The humidity will mostly be in the high 50s.

The Renegades have gone in with an unchanged squad. With Shaun Marsh and Sam Harper being ruled out, the onus will be on Aaron Finch to shepherd the batting. The likes of Beau Webster and Mohammad Nabi need to lend him the support. Cameron Boyce, their leading wicket-taker will be trying his performance against the Heat last time. Kane Richardson’s role will also be key.

The Heat haven’t changed their lineup either. Chris Lynn is their leading run-getter with 373 runs, striking at 153.49. Matt Renshaw has 283 runs and has looked reasonable. AB de Villiers is also high on confidence after his maiden BBL half-century. Labuschagne’s role can’t be undermined. Ben Laughlin has 15 wickets, but at an economy of 8.77. Mujeeb and Swepson have to deliver as well. 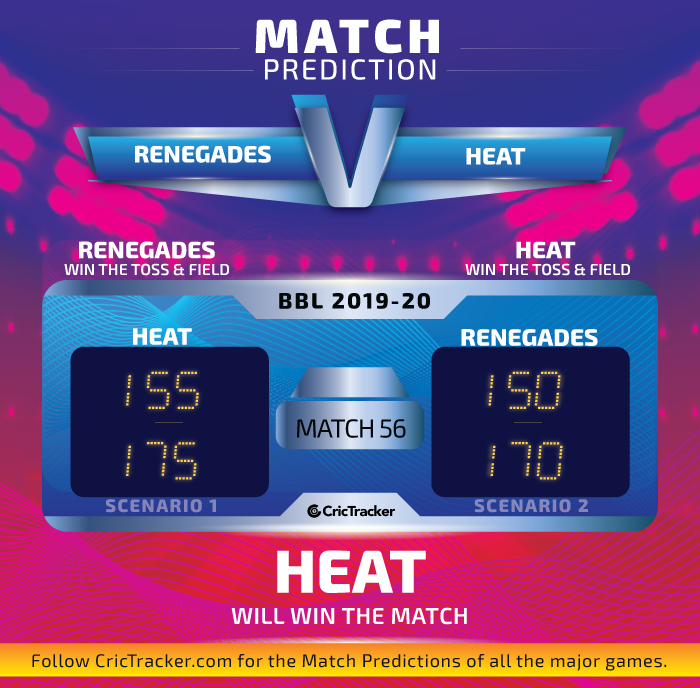