Mitchell Marsh is in the all-rounders' department but he didn't bowl in the previous game.

Melbourne Renegades won the toss and elected to field first

The 7th match of the Big Bash League (BBL) 2019-20 will be played between Perth Scorchers and Melbourne Renegades at the Perth Stadium in Perth.

The Perth Scorchers will host the Melbourne Renegades in the match 7 of the Big Bash League (BBL) 2019-20. Both the sides faced a crushing defeat in their opening game of the season. While the Scorchers went down to the Sydney Sixers scoring only 131 runs with the bat, the Renegades were upstaged by the spirited Sydney Thunder.

The hosts will have to bat well to give any chance to their bowlers. The team has to pull up its socks before yet another season goes out of hands for them. The skipper Mitchell Marsh is expected to step up with his all-round skills for the Scorchers. The Renegades look good in batting while their bowlers will be hoping to shrug off an off day against the Thunder.

There is no rain in the forecast for this match. Sun will be smiling on the Perth Stadium with the temperature expected to hover around 24-26 Degrees Celsius according to AccuWeather.

This is the first match of this season in Perth. In the previous BBL edition, the surface was a brilliant one to bat and chasing was the preferred option. The trend is expected to continue and there should be no surprise if scores around 180-190 are gunned down.

Tom Andrews has been included in the Melbourne Renegades at the expense of Alex Doolan.

Chris Jordan is a very good death bowler and he can score some valuable runs down the order as well. Same is the case with Ashton Agar. Cameron Bancroft and Marsh are decent batsmen and if they get going, very few can stop the duo.

For the Renegades, Finch, hands down, should be your top pick. Marsh, Harper and Christian are also exciting players while Wildermuth opened the innings last season in a few matches while also picked a few wickets. Richardson is expensive but tends to pick wickets in clumps in the death overs. 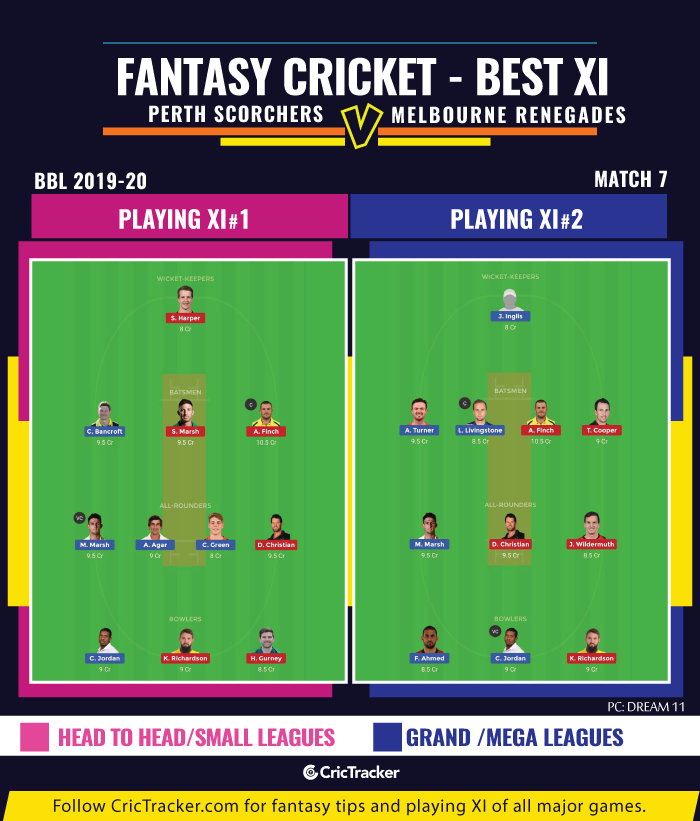 Mitchell Marsh is in the all-rounders’ department but he didn’t bowl in the previous game. You can make any other player VC in place of him.

Melbourne Renegades is expected to win the match.