Glenn Maxwell is in red-hot form with the bat. He played a magical knock of 83 runs in just 39 balls in the previous match against Brisbane Heat.

The 8th match of the Big Bash League (BBL) 2019-20 will be played between Melbourne Stars and Hobart Hurricanes at the Ted Summerton Reserve, Moe in Victoria.

The Melbourne Stars will host the Hobart Hurricanes in the match 8 of the ongoing Big Bash League (BBL) 2019-20 season. Both the sides have got off to a brilliant start to their campaign. Stars were led by Glenn Maxwell with his exceptional 83-run knock against the Brisbane Heat. But the rest of the batsmen will have to step up and make sure that they don’t leave it to him every time.

The Hurricanes defended 129 comfortably against the Sydney Sixers in Alice Springs. D’Arcy Short continued his golden run in the T20 format while the bowlers did a very good job on a slow pitch. Qais Ahmad was the star bowler for them picking four wickets for just 12 runs.

There is no chance of rain in this match if the weather forecast is to be believed. The temperature will hover around 21-25 Degrees Celsius during the match according to AccuWeather.

A solitary match was played at the venue last season between the Stars and the Adelaide Strikers. Chasing was a bit tough in that game and the team winning the toss might opt to bat first. The pitch, to start with, is expected to be a belter and post that, it might slow down a bit.

Nathan Coulter-Nile has been sidelined with an ankle injury. Jonathan Merlo replaces him in the Melbourne Stars squad.

For the Hurricanes, George Bailey and James Faulkner will not play this game. Jake Doran and David Moody replace them.

Glenn Maxwell is in red hot form with the bat. He played a magical knock of 83 runs in just 39 balls in the previous match against Brisbane Heat and will be a wise pick for any Dream11 Fantasy Side. D’arcy Short also looked in good touch with the bat, who scored a brilliant fifty in the opening game for his side. He can play an important role in any Fantasy team. Qais Ahmad, the leg spinner will be an important player, who took four wickets for Hurricanes in their season opener. 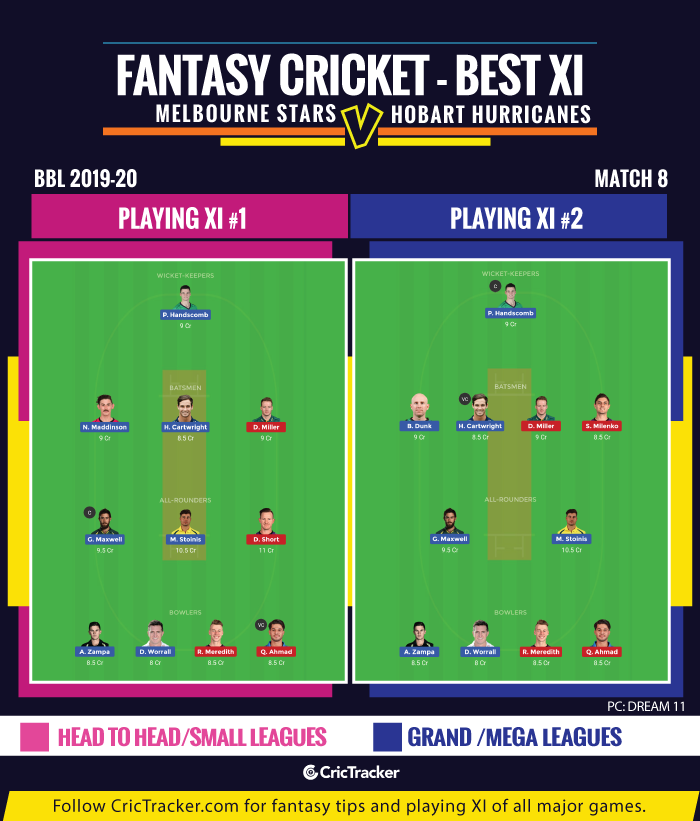 Marcus Stoinis failed to perform well in the opening match of BBL 2019-20. He was struggling to score runs with the bat as well as looked uneffective with the ball. There is no doubt about the fact that he is a brilliant all-rounder, who has won several games for his national side. So, looking forward to Stoinis form, he could be a risky pick but will be worth for any Grand League Side.

Melbourne Stars are expected to win the match.