Tom Banton has been ruled out of the game as he is suffering from a virus.

The Sydney Sixers started with a thumping eight-wicket victory against Perth Scorchers at the Sydney Cricket Ground. However, Moises Henriques and Co slumped to a shock defeat by 25 runs at the hands of Hobart Hurricanes. While chasing 130, the Sixers were going great guns at 48/1 in the seventh over. But the Sixers suffered a batting collapse and were shot out for 104 in 18.5 overs.

The Sixers will now be back at the SCG where they will be locking horns with the Brisbane Heat in the second of Sunday’s doubleheader. The Chris Lynn-led Heat are languishing at the bottom of the table with two defeats in succession. The Heat don’t have a record to boast of against the Sixers. Out of 10 outings, the Heat have won only once in the 2015-16 BBL, losing the other nine matches.

The pitch at the SCG is traditionally a good one for batting. Bowlers can’t afford to spray the ball around. The track plays true throughout and has favoured the team, batting second. There are minimum chances of rain during game-time. The clouds will be there though. The temperature will be around the 19 degrees Celsius mark. The humidity will be in the 60s with not much dew around.

Jackson Bird, the veteran fast bowler, has joined Sixers’ 13-man squad. The pacer has replaced leg-spinner Lloyd Pope. Bird is likely to get into the eleven right away, bearing in mind his experience. Josh Phillippe has 105 runs at a strike-rate of 159.09, but the rest of the Sixers’ batting has been rusty. Tom Curran has five wickets even as Dwarshuis, Abbott and Manenti have four wickets each.

Matthew Kuhnemann has replaced Cameron Gannon in the Heat’s squad for the next match. Tom Banton has been ruled out of the game as he is suffering from a virus. Jack Prestwidge has replaced him in the squad. Matt Renshaw has looked decent with 65 runs. Chris Lynn and Max Bryant have flattered to deceive thus far. All of Heat’s bowlers have picked up wickets. 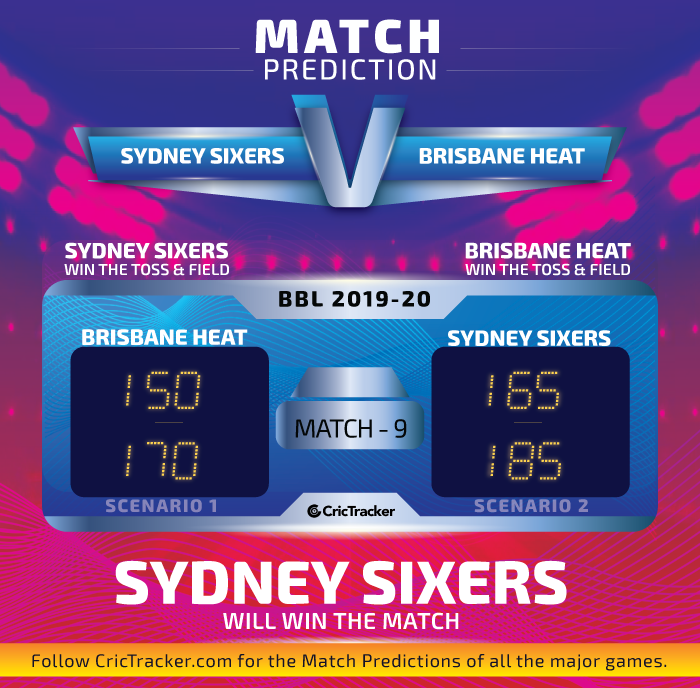