Sydney Sixers are the favourites to win this match.

Brisbane Heat will go one-on-one against Sydney Sixers in the 36th match of the Big Bash League on Wednesday. Sydney Sixers won the battle when these teams met each other last time by 2 wickets. The Sixers have performed better than Brisbane Heat right from the start and haven’t lost many matches. With 8 wins from 12 matches, Sydney Sixers are placed in the second position in the team standings.

Coming to Brisbane Heat, they are already out of the tournament after a defeat against Melbourne Stars by 8 wickets on Sunday. They also lost their previous battle against Perth Scorchers and are placed at the 7th spot in the league table with 16 points in their hand.

Max Bryant is a quality player and knows how to score runs against quality sides. In his last outing, the right-hander smashed 81 off 56 balls with the help of 7 fours and 4 sixes that ended in a losing cause.

James Bazley is a useful all-rounder for Brisbane Heat. He has bagged 12 wickets from ten matches and has also scored 110 runs at an average of well around 14.

Dan Christian will be a good buy for your fantasy teams. He has featured in 13 matches, where he has scored 221 runs at an average of 24.55 and has scalped 7 wickets with the ball as well.

Mark Steketee is consistently picking wickets for Brisbane Heat. In 7 matches so far in this tournament, he has bagged 11 wickets at an economy of 8.85 and has also scored 62 runs with the bat

Hayden Kerr is the pick of the bowler for Sixers in this tournament. In 13 matches, he has taken 19 wickets, with the best figures reading 4 for 32.

Josh Philippe has been doing exceptionally well with the bat in this tournament. After getting featured in 13 matches, the 24-year-old has scored 409 runs at an average of 34.08, with the highest score of unbeaten 99. 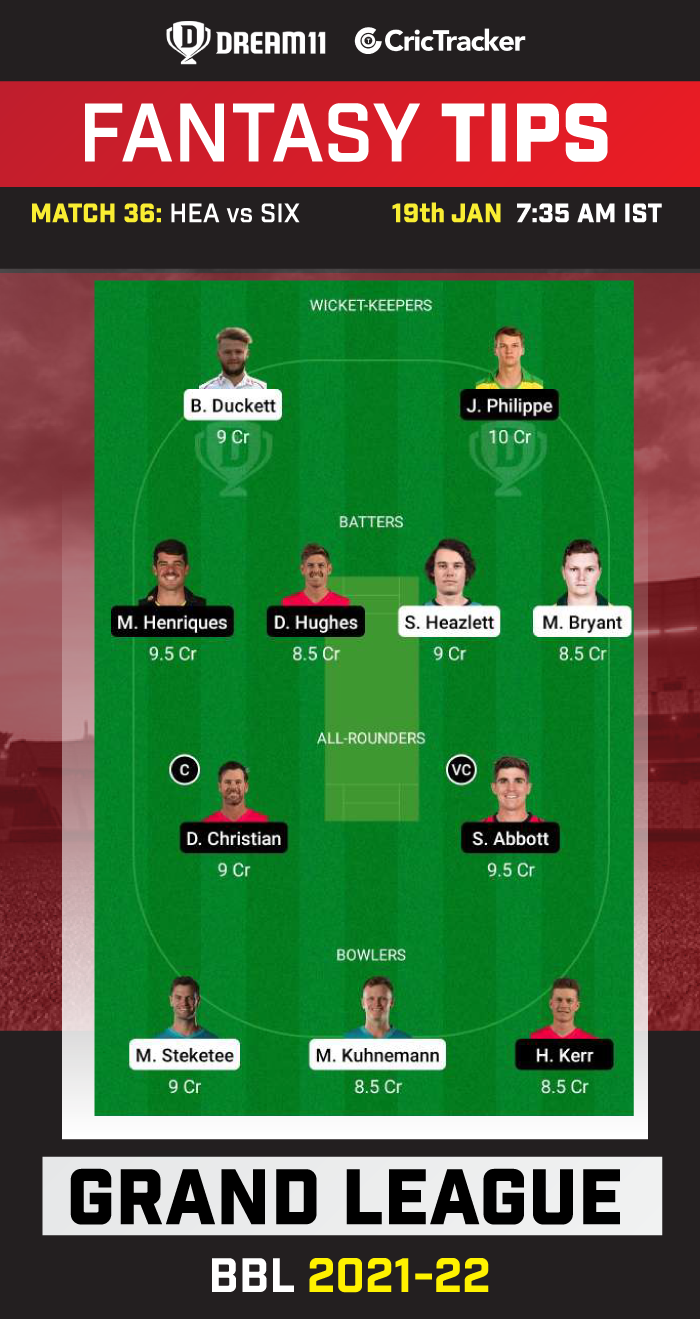 Ben Duckett has amassed 299 runs in 11 matches in this tournament at an average of 27.18, with the highest score of 78. He will be a risky captaincy option for your Dream11 fantasy teams.

Jimmy Peirson usually comes to bat down the order and has scored 77 runs after featuring in 10 matches in this competition. Hence, it is advisable to avoid him while making your fantasy teams.