Stars would be eager to give their best shot in the final game of Kevin Pietersen.

Melbourne Stars and Hobart Hurricanes will lock horns in their respective final league matches in the ongoing Big Bash League (BBL). The stakes are high in the game as the visitors are in a must-win situation and would want to win and qualify for the knockouts. In case they lose, then their fate would be in the hands of the game between Melbourne and Brisbane Heat. However, Hobart will have to pray that Heat loses the game as the net run rate between the two teams is close.

The match is special for Melbourne Stars as their gun player Kevin Pietersen is bidding adieu to cricket and will play the final match of his illustrious career. They would be eager to win the match for him after having a dreadful season. Stars would also be without their head coach Stephen Fleming who has flown to India for the IPL auctions and David Hussey will take over the coaching responsibilities in his absence.

MCG pitch is under the scanner for quite some time now as it was rated as poor by ICC after the Boxing Day Tes match in the recently concluded Ashes. Even during the ongoing season of BBL, the wicket has generally been on the slower side and is likely to dish out a similar surface on Saturday. It will be yet another low-scoring encounter and the teams have to be cautious while aiming for a certain score batting first.

Here’s what CricTracker predicts for the game: 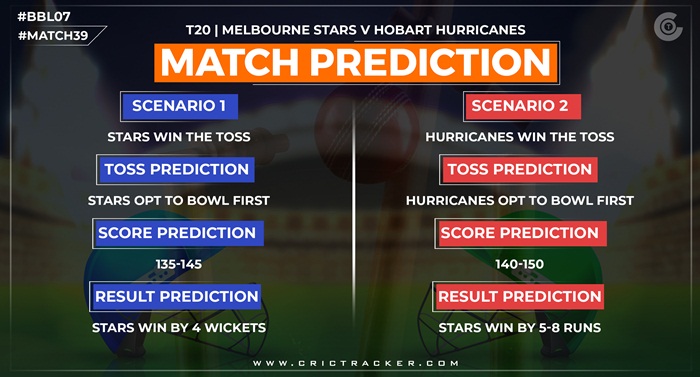 Stars have struggled to find the winning combination throughout the season. But the fact that it is the farewell game of Pietersen might bring the best out of the lot. Glenn Maxwell who stormed back into the form in the last match will be missed badly as he is currently with the Australian side called up as the cover for the injured Aaron Finch. The team management though would expect some special performance from the South Africa born cricketer Kevin Pietersen.

The skipper John Hastings would also feel that the bowling attack led by him would come together and spoil the party for Hobart.

Hobart Hurricanes are likely to play an unchanged XI for the must-win encounter at the Stars. The opener D’Arcy Short has been in sensational form this season and his team needs one more big knock from him. The skipper George Bailey also needs to score runs at the top of the order and make sure that he holds one end. The move to promote Matthew Wade paid dividends in the previous game and they might continue opening with him. Even the likes of Jofra Archer and Tymal Mills have come to party if they are to qualify to the knockouts.

The prediction is for the Melbourne Stars to win the game.