Surprisingly, there are no Indian venues in the list.

The ODI cricket has evolved a great deal in the last few years. It was not long ago that the fan following of the fifty-overs cricket had started to dwindle big time. However, some serious resurgence from some top sides has instilled excitement and flavor back in the format. Teams like England have been great advertisers of an aggressive brand of cricket. No wonder why they top the charts when it comes to performances in ODI cricket since World Cup 2015.

Whenever the English side or the Indian team is in action, the expectations are set that it will be a high scoring game. While the players and the teams are totally responsible for this revival of ODI cricket, the venues and the tracks also deserve an equal credit for it, if not more. The pitch curators and the groundsmen have been able to maintain the surfaces well despite plethora of action coming in every season.

This includes the recent heroics of the team England when they posted a mammoth total of 481 in an ODI fixture against Australia. The next in line is the Manuka Oval in Canberra. The venue has witnessed some exciting run fests too. Runs have been scored at a run rate of 6.3 at the venue in the 7 matches played since 2013. The iconic name of Wanderers, Johannesburg, comes next in line with a run rate of 6.28 in the 7 matches played.

Well, Wanderers has always seen runs scored at a fast pace – be it the epic game between Australia and South Africa a decade ago, or be it AB de Villiers fastest ODI ton against the Windies. Another English venue, the Rose Bowl in Southampton, has also seen runs scored at a brisk rate – 6.17 – since January 2013. India, a nation that is proud of smaller grounds and big totals, surprisingly has no venue in this list of top 10!

Best run rate at a venue in ODI cricket since January 2013: 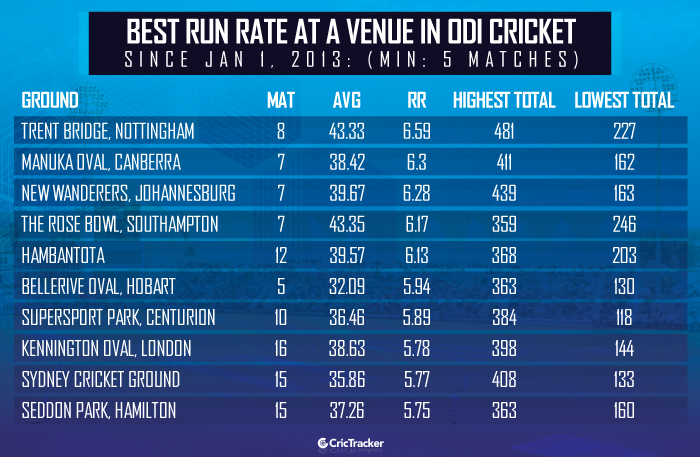