Jake Weatherald was the leading run-scorer for the Strikers in the previous edition of the BBL.

Melbourne Renegades and Adelaide Strikers are set to lock horns in Match No.3 of the Big Bash League 2021-22 at the Docklands Stadium in Melbourne. The Strikers will be led by Peter Siddle as their main men, Alex Carey and Travis Head, are with the Australian Test team for the upcoming Ashes.

The Renegades, on the other hand, is set to be captained by Kane Richardson in the absence of Nic Maddinson. Aaron Finch isn’t their skipper anymore after stepping down last month.  The Strikers have mostly dominated the Renegades at the Docklands Stadium, having won four out of five matches.

The pitch at the Docklands Stadium is generally an excellent one for batting. Chasing should be the way forward. The bowlers need to work out of their skin to restrict the batters. The spinners may extract a bit from the surface.

Jake Weatherald is expected to open the batting, although he batted in the middle order for some part of last season. The left-hander was their standout batter without a doubt. In 15 matches, Weatherald notched 433 runs at an average of 36.08 and a strike rate of 141.04. If he gets going, the Renegades may find themselves in a lot of trouble.

Rashid Khan has been a fulcrum of the Strikers ever since he started playing in the BBL. The Afghanistan tweaker is one of the best in the business. Last season, he played only 10 matches, but picked up 16 wickets at a stupendous economy rate of 6.87. Not to forget that Rashid is no mug with the bat by any means. 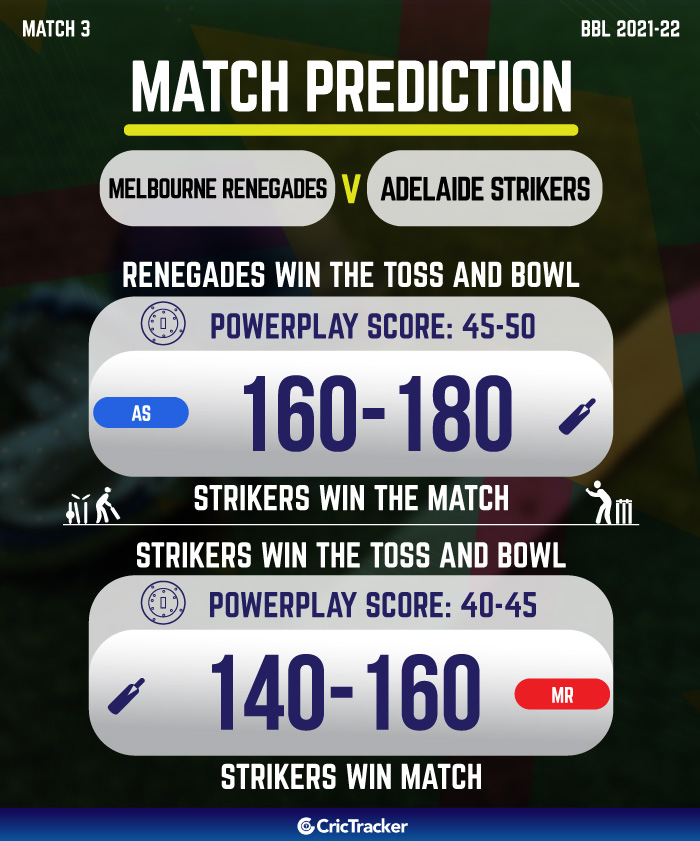