The Thunder are currently on a five-match winning streak and are placed second in the points table.

Hobart Hurricanes and Sydney Thunder are set to lock horns on Monday, January 10 at the Melbourne Cricket Ground. The Chris Green-led Thunder are placed second in the table with 26 points from 10 matches. With a net run rate of 1.265, they are currently on a five-match winning streak.

The Hurricanes, led by Peter Handscomb, on the other hand, are hanging in the middle of the points table with 20 points from 10 matches. After losing two back-to-back matches, the Hurricanes got some momentum back with their eight-wicket win over Brisbane Heat. Beating the Thunder won’t be a walk in the park.

The pitch at the MCG has been a fairly decent one for batting. Bowlers need to be on their top of their game to keep the batters in check. Batting second should be the way forward since the chasing teams have won two out of three times thus far in the tournament.

Jason Sangha has been exceptional for the Thunder in the ongoing edition of the tournament. The right-hander has scored 294 runs from seven games at an average of 58.80 and a strike rate of 135.48. He has also picked up three wickets in four overs at an economy of six. If he gets going, the Hurricanes could find themselves in trouble.

Pakistan fast bowler Mohammad Hasnain has only played two games for the Thunder in the current season of the BBL. But in the short period, he has already made quite a bit of impact. The speedster has picked up six wickets from two games with two three-wicket hauls to show for his efforts. The Hurricanes’ batters need to play him with caution. 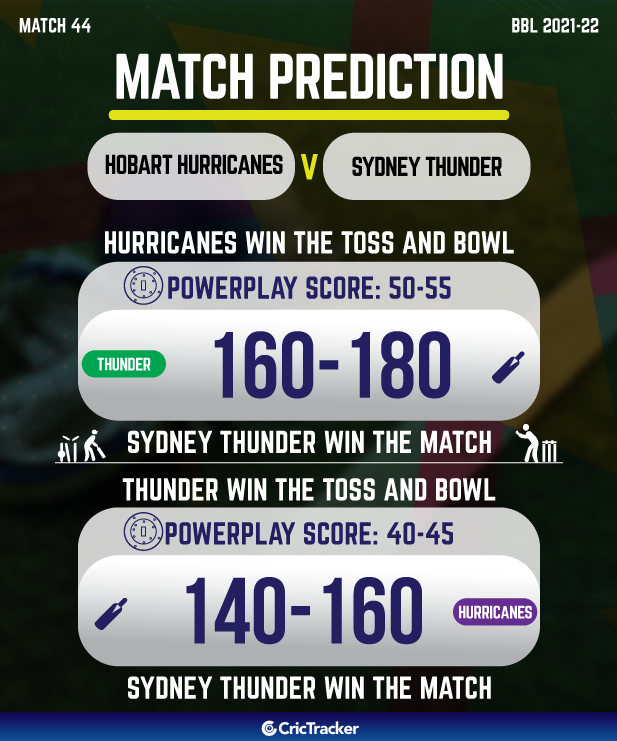