Blending Modernity with Success – How Jalaj Saxena Reinvented Himself

Blending Modernity with Success – How Jalaj Saxena Reinvented Himself

What Jalaj Saxena deserves, given where he stands today, is an opportunity - be it in the IPL or with the Indian team. 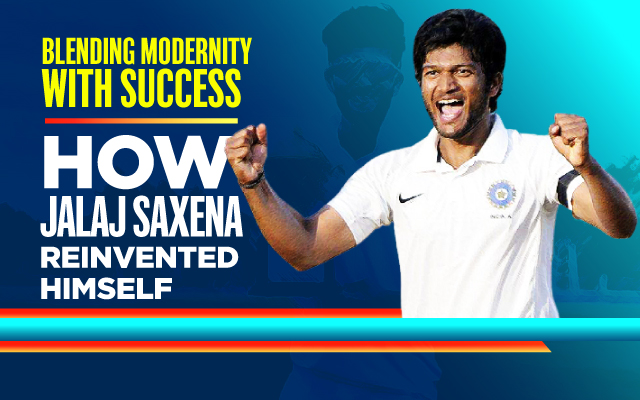 Jalaj Saxena troubling batsmen in the Indian domestic circuit would certainly not be considered an unusual occurrence or headline event, given the remarkable consistency with which he has gone about his business over the years and across formats. However, when he turned up for Kerala last month in the Syed Mushtaq Ali Trophy (SMAT), there seemed to be something more, something different to his game.

It was not just about the 10 wickets he managed to scalp in 5 games which certainly makes for a pretty reading since he happens to be one of the five best spinners, in terms of wickets, in the tournament. It was something subtle- how every time he bowled, the batsman struggled badly to pick him, how every time there was a need for a wicket, the team captain Sanju Samson turned to him and as if by magic, the desired results instantly came by.

Jalaj Saxena, this time, seemed to be in that zone that every bowler aspires to get into, where every time the ball was sent down from that right arm of his, a wicket was more likely to be the outcome than anything else. He has always been a wicket-taking bowler, his records speak for themselves.

Earlier though it was a case of cleverly utilizing the usual tools an off-spinner uses to trap the batsman. However, the lethality he now possesses, that ability to puzzle and keep the batsman guessing with every delivery, has been brought about by the addition of two weapons to what was already a potent arsenal.

The two deliveries- the Carrom Ball (the ball sharply angles away from a right-handed batsman after pitching) and a twist to it, called the Reverse Carrom Ball (the grip is identical to that of a carrom ball but there is sharp angling into a right-hander this time after pitching), were worked upon and perfected in the intervening lull that came in domestic cricket since the lockdown was announced in March of the previous year.

Comparison of best spinners up for auction in the IPL 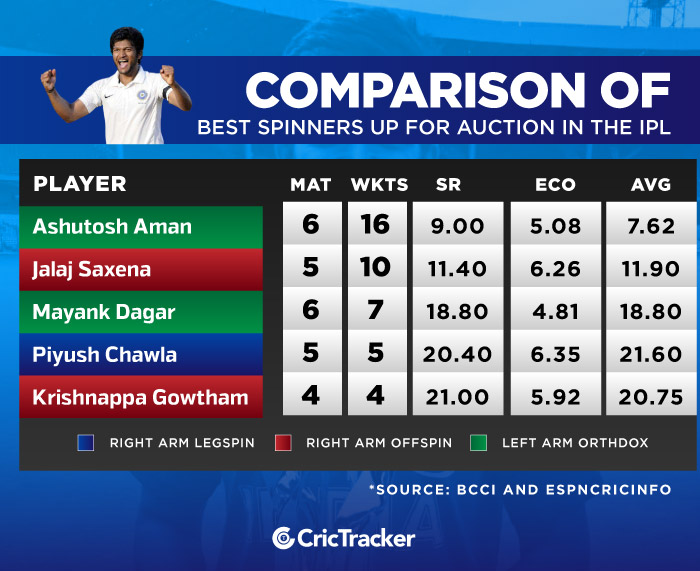 The efficacy of both deliveries could be gauged from the fact that none of the others competing in the tournament could bowl them. Jalaj Saxena, if we go by the secondary information available, happens to be only the fourth in the world currently with the ability to bowl the Carrom Ball (besides Mitchell Santner, Mujeeb Ur Rahman, and Ravichandran Ashwin) and the only one besides Ashwin known to possess the variation to it.

Due to the grip and method of delivery, both can be extremely difficult to pick. No wonder then, that the batsmen seemed clueless facing him. His dot ball percentage was one of the highest amongst the spinners, so was his average and strike-rate. Performances, variations, experience, and consistency- that is Jalaj Saxena at this point; revamped, reinvigorated, and troubling batsman like never before.

While his supremacy in recent times over his peers in the longer format always remained unquestionable, post this rejig to the bowling and its effectiveness, if the numbers and performances are to go by, he is now at the forefront even in the shortest format. This implies that in the Indian Premier League (IPL) auction scheduled to be held later this month, he is the pick amongst the spin bowlers who will go under the hammer.

For any franchise, his utility, unlike others, goes beyond that of being just another decent squad player. With the captain and management’s faith, franchises can hope to have a genuine strike bowler in their ranks, who can replicate what the likes of Yuzvendra Chahal, Rahul Chahar, or Ravi Bishnoi have been doing for their respective teams.

This is not an unreasonable supposition- his numbers in SMAT are on par, or better than even the other IPL spinners, despite having played his games at the Wankhede, which is known for its flat, batting-friendly wicket. There is, also to consider, his more than decent ability with the bat, which often gets masked under the shadow of his bowling. Thus, amongst the allrounders, too, he is one of the foremost names, not just from the domestic pool but, it would not be an exaggerated account to say, across the globe, that franchises can pick this time. 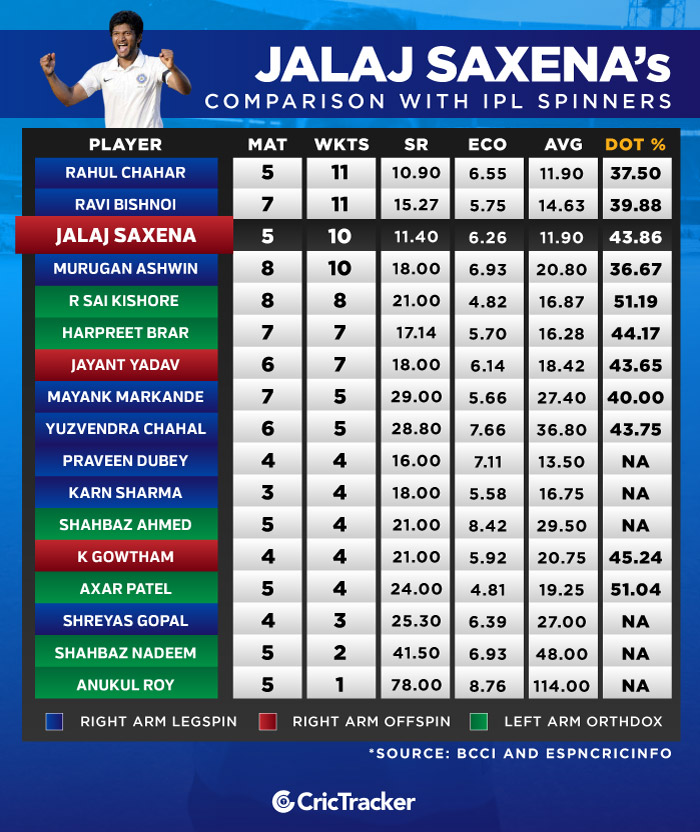 Jalaj Saxena at par with the best in the business

Even if Saxena’s numbers and variations put him at par with the best in the world, for reasons best known to the powers that be, he consistently gets ignored whenever the Indian team is chosen. Kerala Coach Tinu Yohannan, who has seen his ability and utility from close quarters, voiced his bafflement in a recent interview at the treatment his team’s all-rounder has received from the national selectors, after yet another snub when the squad was picked for the first two Tests against England to be played at home.

Yohannan indeed has a point- when the opportunity came up, names, whose performances were nowhere near enough to that of Saxena- in the SMAT even, forget Ranji Trophy (which should technically be the standard to choose the Test squad), were chosen ahead of him, while perplexingly enough, he did not manage to bag a place even in the list of standbys!

What Jalaj Saxena deserves, given where he stands today, is an opportunity – be it in the IPL or with the Indian team. It is abundantly clear that here is a cricketer who truly belongs to a level higher than the one where he is consigned and circumscribed currently.

While every cricketer would more often than not like to consider himself deserving enough for greater opportunities than he currently possesses, there often exists a chink somewhere – attitude, performances, consistency, vacant spot in the team- something or the other, which becomes apparent when looked at neutrally and objectively.

With Saxena, none of these can logically be used to justify his rejection. In fact, quite the opposite- each one of these can be used to justify his name over the others for selection. To not make use of him now, when he is in that purple patch, would be a loss- certainly for him or the teams that could undoubtedly benefit from his talent- but moreover for the fans who deserve to see a player of this caliber turn up at the highest level.

Important trivia: Only five cricketers in the world have to their credit 6000+ runs and 350+ wickets since 2015 in first-class cricket. Saxena’s name happens to be one of them and he is the only Indian in the list, alongside the likes of Ben Stokes and Moeen Ali.