Keith Barker was easily Hampshire’s top player in the previous county season where he took 37 wickets.

The South Group match in Bob Willis Trophy, 2020 will be played between Middlesex and Hampshire at the Brunton Memorial Ground in Radlett.

This game will be streamed live on the YouTube channel of the Middlesex County Club.

Middlesex will host Hampshire at the Radlett’s Brunton Memorial Ground in the second round of the Bob Willis Trophy. Middlesex occupies the top spot of the South Group as the 190-run win over Surrey fetched them 22 points. Hampshire, on the other hand, is missing some of their big stars for this season. They earned only three bowling points during their first match against Sussex where they suffered a 94-run defeat. Hampshire was bundled out for 153 and 150 respectively in the two innings.

The Brunton Memorial Ground in Radlett is expected to be under pleasant weather on the first three days but the last session on the final day could be a washout.

The Brunton Memorial Ground in Radlett was used for the first time in the 2019 county championship. It hosted the match between Middlesex and Glamorgan where the Australian part-time leggie Marnus Labuschagne claimed five wickets which insists the support that spinners are going to get here.

Hampshire’s Kyle Abbott is ruled out of the tournament.

Keith Barker was easily Hampshire’s top player in the previous county season where he took 37 wickets.

Nick Gubbins scored 192 in the first innings of the previous round against Surrey and followed it with 60 in the second essay.

John Simpson is likely to add value to the fantasy team with his keeping ability going along with his consistency with the bat.

Martin Andersson scored 69 runs in the match against Surrey which includes a 62-ball 51 during the second essay. 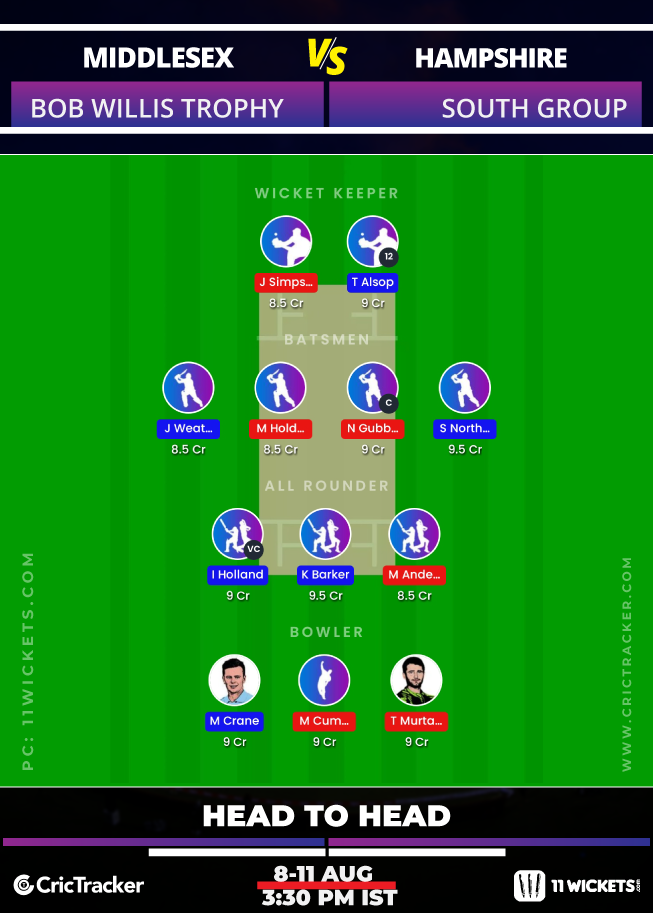 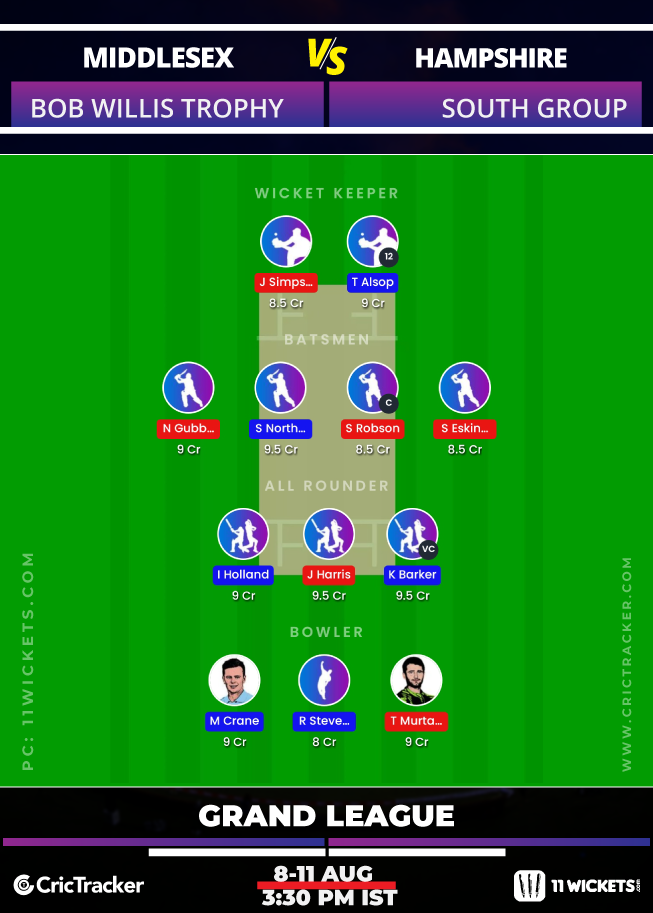 Ryan Stevenson is included to the Hampshire squad for this match. The experience of Stevenson will be helpful for Hampshire to overcome their defeat against Sussex. He could be included in place of opener Felix Organ who had ordinary outings in the previous match.

Middlesex is likely to earn an edge over Hampshire and earn maximum points from the match.