Imrul Kayes is an obvious pick for any fantasy side looking forward to his convincing form with the bat.

Chattogram Challengers won the toss and elected to field first.

The Eliminator of the 2019-20 Bangladesh Premier League will be played between Chattogram Challengers and Dhaka Platoon at the Sher-e-Bangla Stadium in Dhaka.

After a long stint, Chhatogram Challengers have finally made into the eliminator in BPL 2019-20. They did a convincing job in the group stage and the same would be expected in the crucial clash against Dhaka Platoon. In batting Imrul Kayes has certainly emerged as the best player for his side. He has so far muscled 405 runs in 11 games with four 50+ scores.

He will have to replicate his scintillating form in the eliminator. Meanwhile in bowling Mehedi Hasan Rana has impressed everyone with the ball. He has grabbed 17 wickets in eight games with two four-wicket hauls. If their in-form players managed to perform as per their calibre then they are expected to emerge as the winners in the upcoming game.

Dhaka Platoon has some issues with their bowling unit, who didn’t look up to the mark in the ongoing tournament. Their bowlers will have to come up with some improved display in their trait if Platoon wants to outclass in-form Challengers. On the other hand, Tamim Iqbal and Mominul Haque have shown glimpses of good form and they will surely look to continue with the same in the eliminator.

The weather is expected to be quite hazy but there are no chances of rain on the match day. The wind is expected to blow at a rate of between 7 and 11 Km/hr whereas the temperature will deviate from 13 to 23 Degree Celsius throughout the day according to Accuweather.

The pitch at the Shere-e-Bangla stadium has certainly been acting as a slow wicket as the tournament progressed. The spinners will play a vital role in the outcome of the match as they will get a lot of turn from the wicket. The batsmen will have to be quite attentive against the spin heads in the crucial game. Meanwhile, the side winning the toss will most probably look to bat to take some advantage of the friendly conditions in the early part of the game.

Average first innings score:– 175 [In the last five games at the venue this season]

Imrul Kayes is an obvious pick for any fantasy side looking forward to his convincing form with the bat. He is currently the fifth leading runs scorer in BPL 2019-20 with 405 runs in 11 games at a strike rate of 132.78. Rubel Hossain and Mehedi Hasan Rana will be the player to watch out with the ball in the eliminator as they have produced some brilliant performances in the ongoing tournament. Chris Gayle is a big match player and he should be picked in any Dream11 Fantasy team. However, he joined the tournament later but his match-winning ability can never be ignored. 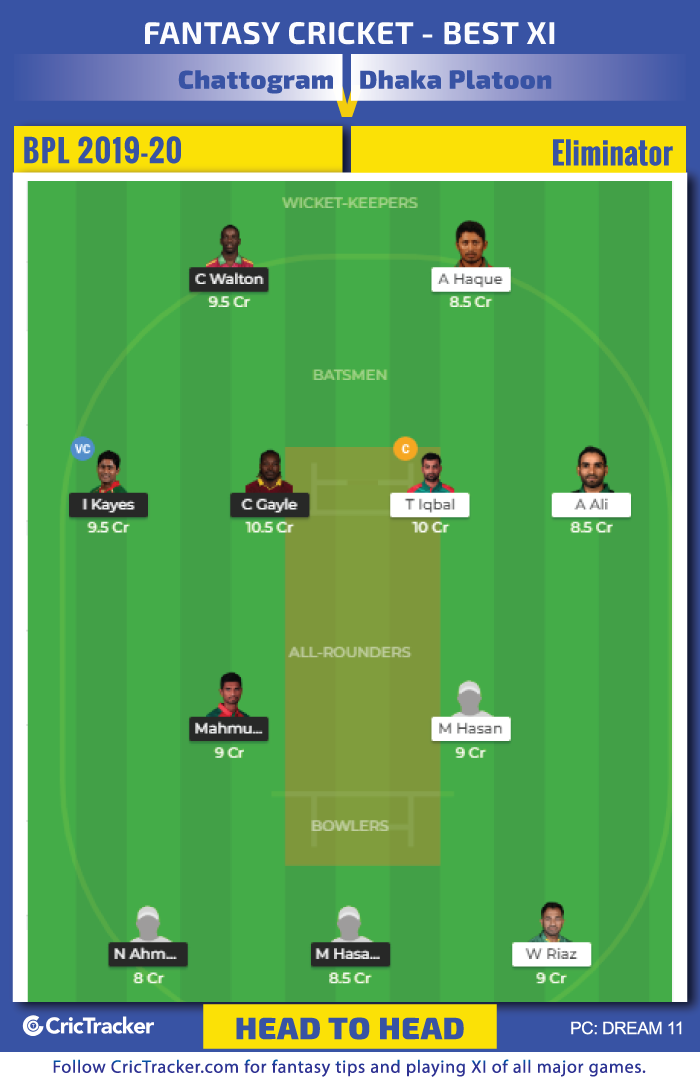 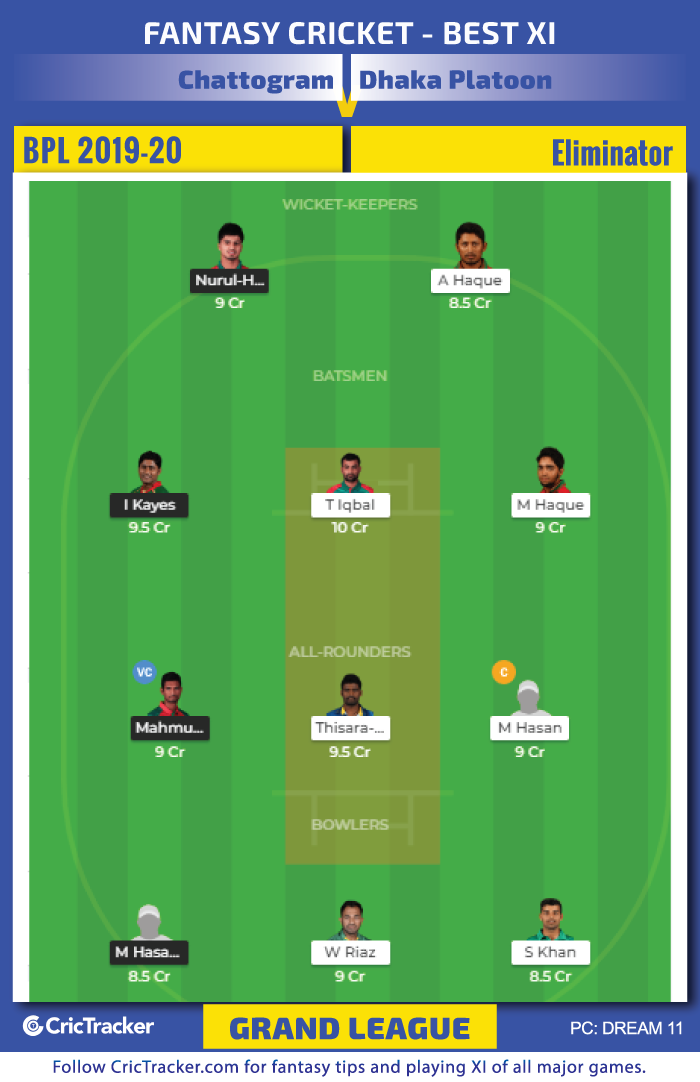 Try to pick the in-form batsmen from both the sides with a couple of spinners in the Grand League side. It is a crucial game so the high profile players will look to come up with some breakthrough performances in the match between Chattogram Challengers and Dhaka Platoon.