In the second of Tuesday’s doubleheader at the Zahur Ahmed Chowdhury Stadium, Chattogram Challengers and Sylhet Thunder will be facing each other. Mahmudullah’s Challengers lost to the Khulna Tigers by eight wickets, but made a strong comeback with a six-wicket triumph over cellar dwellers Rangpur Rangers. A win in their next game could well take them to the top of the table.

For the Thunder, it has been a forgettable BPL 2019-20. Mosaddek’s men have lost three games on the trot with a net run rate of -1.979. Along with the Rangers, the Thunder is the only team, who are yet to open their account in the tournament. The Challengers are high on confidence and will be playing at home. Hence, Saikat and Co need to pull a rabbit out of the hat to arrest their slump.

The pitch in Chattogram has been a good one for batting and bowlers can’t afford to err much in their line and lengths. A fairly high-scoring game seems to be in store. The Challengers have won both games while chasing and they might not alter their tactic. The temperature will be around the 22 degrees Celsius mark. The humidity will be in the 70s throughout the duration of the game.

Chadwick Walton and Imrul Kayes are leading the run-charts for the Challengers with 117 runs each. Both have a half-century each to their name at a strike-rate around 140. Avishka Fernando has threatened in phases, but needs to score big. The rest of the batting has to step up at the earliest.

The likes of Mahmudullah and Ryan Burl can also hit the leather a long distance. Mahmudullah did well with the ball against the Rangers, giving away 17 runs in four overs. Burl needs to be a bit more accurate though. Rubel has been decent and needs support from the likes of Williams and Rana.

The Thunders’ batting has looked indifferent to say the least. Mohammad Mithun scored a 48-ball 84 against the Challengers itself in the first game. However, he went on to fail against the Rajshahi Royals and Dhaka Platoon. The top order, comprising Talukdar, Fletcher and Charles, is yet to fire.

Skipper Mosaddek needs to sort out his batting slot as he seems to be in good touch, especially after his 44-ball 60. The Thunder also have to think upon settling their bowling attack. Mosaddek, Nayeem Hasan, Ebadot Hossain and Nazmul Islam have two wickets each, but haven’t been effective enough. 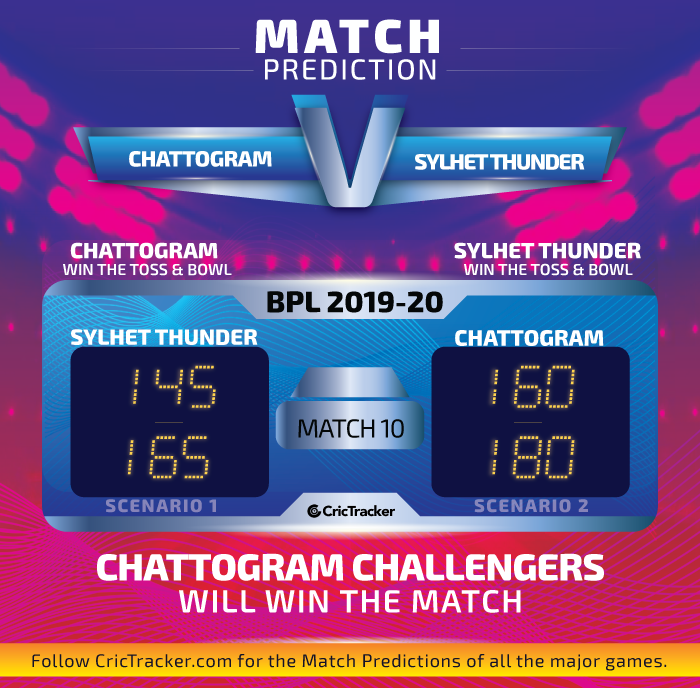