Rossouw and Rahim have been the bedrock of the Tigers' batting unit.

The 22nd game of the 2019 Bangladesh Premier League will be played between Khulna Tigers and Rangpur Rangers at the Shere Bangla Stadium in Dhaka.

After successive victories in their opening three encounters, Khulna Tigers were looking like the team to beat, but after having suffered back-to-back defeats in their past two games, the wheels are threatening to come off. The Tigers are desperate for a turnaround and they’ll hope they can do that on Friday against one of the sides’ that they defeated during their three-match winning streak [by eight wickets]- Rangpur Riders.

It won’t be as easy as it turned out to be the last time these two sides’ met, as Rangpur Rangers look to be on their way up after having finally broken their four-match losing streak with a six-wicket win over Chattogram Challengers. The win was spearheaded by an all-round effort from Lewis Gregory, who claimed two wickets with the ball before going on to shellack the Challengers’ bowlers to the tune of 37-ball 78, ensuring the target of 164 was chased down in a canter.

Unfortunately, there are 40% chances of rain playing spoilsport in Dhaka on Friday. The temperature is expected to be between 10-18 degrees.

The tournament returns to Dhaka after completing its leg in Chattogram. In the first leg at Dhaka, the batting proved to be difficult as compared to Chattogram, and with the rain around on Friday, it could prove to be even more arduous for the batsmen.

Average 1st inning score: 150 [In the last five games played at the venue]

Will be updated whenever there is any news

Khulna Tigers- Rilee Rossouw [259 runs at 86.33] and Mushfiqur Rahim [154 runs at 51.33] have been the bedrock of the Tigers’ batting unit and will once again be the key to their fortunes on Friday.

Rangpur Rangers– Lewis Gregory’s sensational all-round effort- two wickets followed by a whirlwind 37-ball 78 was at the heart of Riders’ maiden win in the last game. He will once again be the X-factor of their side while Mohammad Naim [156 runs at 31.20] and Mustafuzur Rahman [6 wickets at 22.30] and Mohammad Nabi [4 wickets] will lead the batting and bowling department respectively. 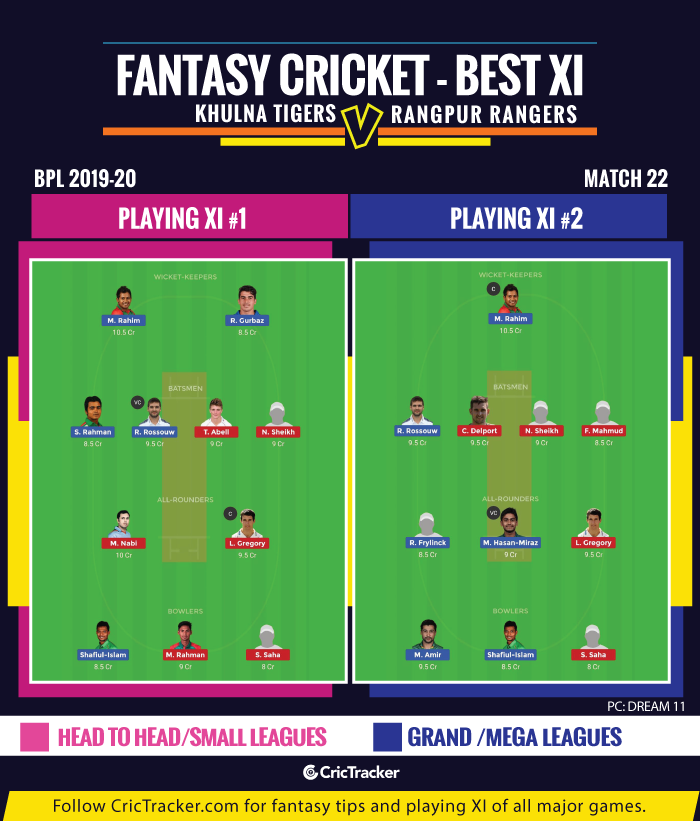 The likes of Lewis Gregory and Rilee Rossouw have been in brilliant form thus far. Hence, opting for them as captain/vice-captain can be a good punt.

Khulna Tigers are expected to win.